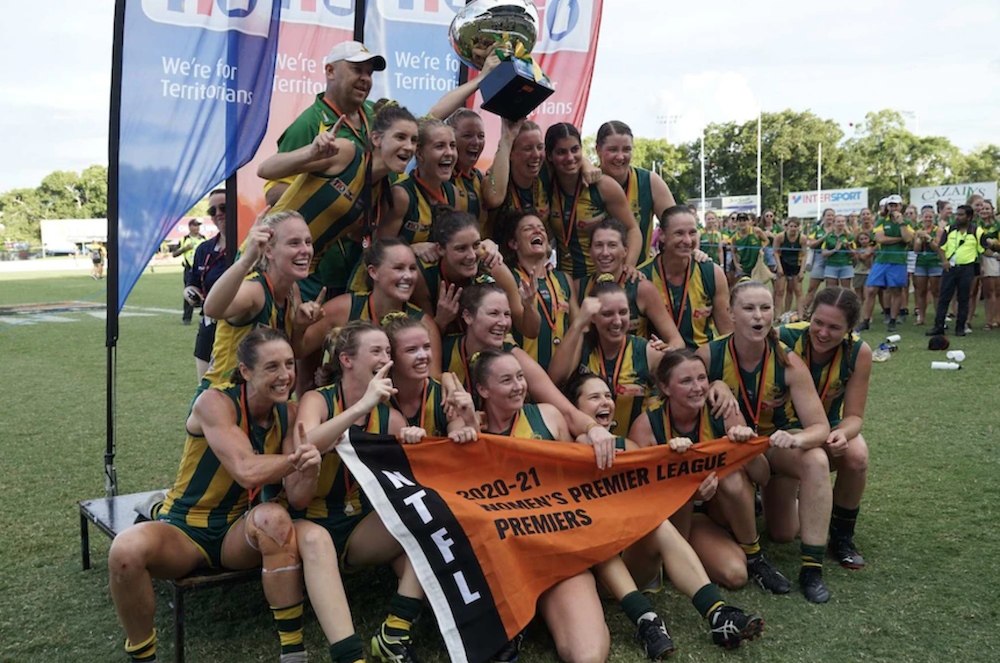 IT was a tight tussle from the get-go between Darwin Buffettes and Pint Queenants in the 2021 Northern Territory Football League (NTFL) Women’s Premier League grand final, with the minor premiers getting up and defeating the Buffettes 7.4 (56) to 5.5 (35). It was Pint’s maiden grand final appearance and they made no mistake against the rampaging Buffs, taking a 14-point lead into the second half before capitalising in the third and holding on in a tightly contested final term to run home with the 11-point margin.

It was an even start between the two teams, unable to be split with high pressure footy across the ground. Whilst Darwin came in with bragging rights as the only team to defeat Pint this season and completed during the semi finals, Pint would not be held back and came in with a real fire in the belly, furthered by a hefty Queenants crowd making itself known.

An Ashanti Bush major opened proceedings, with the speedy forward benefiting off a Pint tap and showcasing her vision up forward. But a Casey Morris snap rung true, with the forward target taking her chance and proving more than capable from the tight angle on the boundary. Whilst the Buffs got the first score on the board, it took another 10 minutes for the side to hit the scoreboard despite controlling much of the proceedings, with Shakira Henry leading well and sneaking a set shot through. But that was the last time Darwin led, as from there the scoring opportunities died off for the Buffs, with the side only putting three more goals on the board for the remainder of the match as Pint’s smothering defensive pressure proved too much.

A hard-fought second half saw Pint run away with it in the third, although tighter defence from the Buffs saw the Queenants rendered scoreless in the final term as the momentum swung the way of the blue side. But momentum was nothing without accuracy on the scoreboard, with 1.3 for the final term unfortunately not enough to win the match. A third Bush goal sparked the side once more but scoring dried up from there as Pint maintained the defensive pressure to force stoppage after stoppage and whittle down the clock.

The uber consistent Jemma Iacono took the field for her 100th Women’s Premier League match and had an immediate impact, as did Pint’s Jasmyn Hewett who well and truly came to play. The latter was awarded the Best on Ground Williams Medal following a two goal haul and huge impact through the centre. Also featuring heavily were Pint’s Amy Chittick and Rebecca Pryer – also in her 100th match – while Darwin’s Dom Carbone and Machaelia Roberts put in the hard yards consistently.