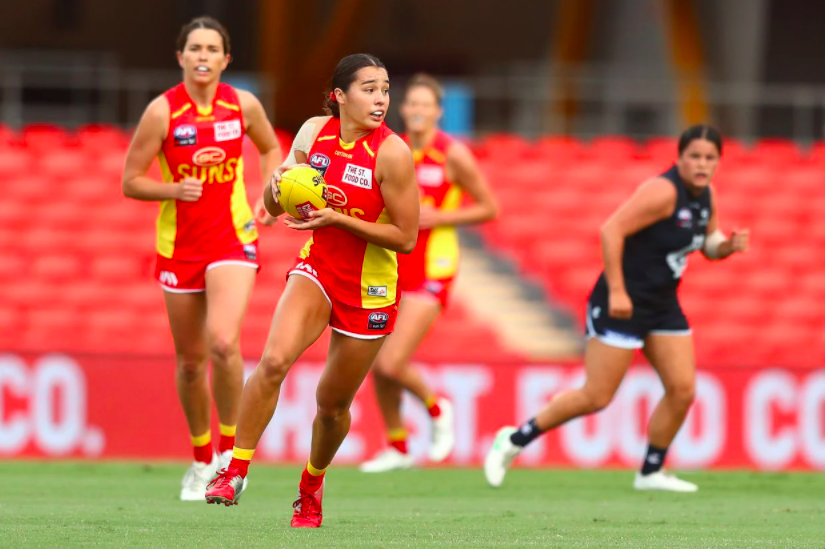 ROUND 8 of the 2021 AFL Women’s season saw games played across the usual three-day stretch, with a number of fresh faces continuing to make a mark on the competition having established their roles in each team. We run you through how Generation W’s generation next fared across the latest weekend, focusing on players in every match under 21 years of age selected from the most recent draft crop.

Carlton inflicted the greatest ever AFLW score on Gold Coast in Round 8, but it was the Suns’ youngsters who made a splash – particularly in the early stages. Lucy Single was among the best performers and produced one of the highlights of the afternoon with her scintillating goal on the run. The 18-year-old carved up the middle of the ground, weaving through traffic and continuing her momentum to eventually sink the goal, a feat she seemed shocked by in the end.

Wallis Randell was also productive further afield, while Maddison Levi impacted in the forwardline and Janet Baird returned for her first senior outing since Round 3. Daisy D’Arcy also continued her solid run in the Suns’ side, as first year Carlton defender Daisy Walker managed a handful of touches in the winning team.

Greater Western Sydney (GWS) took home the points in a low-scoring affair against Geelong, with the young Cats side remaining winless in 2021. Draftee Carly Remmos made her debut in the hoops, while fellow former Geelong Falcon Laura Gardiner marked her senior return with a 17-disposal effort. Darcy Moloney and Olivia Barber scrounged five touches apiece for the Cats, while Giants youngster Tarni Evans had it nine times and continues to show promise.

Collingwood achieved an emphatic return to the winners list by trumping St Kilda in Round 8, with both sides fielding some exciting youth. Tarni Brown again found a good amount of the ball with 16 disposals (13 handballs), as Joanna Lin produced another eye-catching goal in the Magpies’ win. Tyanna Smith was one of the few Saints to stand up while they were being comprehensively beaten early on, while Jess Matin booted her maiden AFLW goal and Alice Burke got her first extended run with a second-straight senior game.

Brisbane picked up a crucial win over North Melbourne ahead of finals, with a young Lions producing the game’s key moment. Speedy rookie Courtney Hodder‘s moment of brilliance in the final term would seal the game for Brisbane, as the 20-year-old finished with eight disposals, eight tackles, and 1.2. Indy Tahau was impactful with her half-dozen disposals, while Kangaroos forward Bella Eddey managed three handballs for the day.

Richmond claimed its third-ever win on Sunday by knocking off fellow 2020 expansion team, West Coast on home turf. Number one pick Ellie McKenzie was again in the thick of things, finishing as her side’s second highest ball winner with a career-high 22 disposals. West Coast’s Amber Ward achieved the same feat as she completed an important role, while Bella Lewis continues to impress through midfield and Shanae Davison enjoyed her second run at senior level for the Eagles.

Adelaide’s comprehensive win over the Western Bulldogs made for an ominous statement on the eve of finals, though there were positives as always for the young Bulldogs side. Versatile prospect Isabelle Pritchard notched a career-high 10 disposals, with rebounding defender Sarah Hartwig remaining consistent and number two pick Jess Fitzgerald also afield. For the Crows, prized draftee Teah Charlton had the ball 12 times and laid seven tackles.

Melbourne’s claim for genuine premiership contention took another step forward as the Dees beat Fremantle in Round 8, capping off an entertaining weekend. Midfielder Eliza McNamara has been one of the best-performed first year players each week, and did not waver in this clash with 21 disposals (19 kicks) and a goal for the winners. Tall forward Alyssa Bannan was also handy with three marks among her nine touches, as Freo’s Sarah Verrier had it six times.