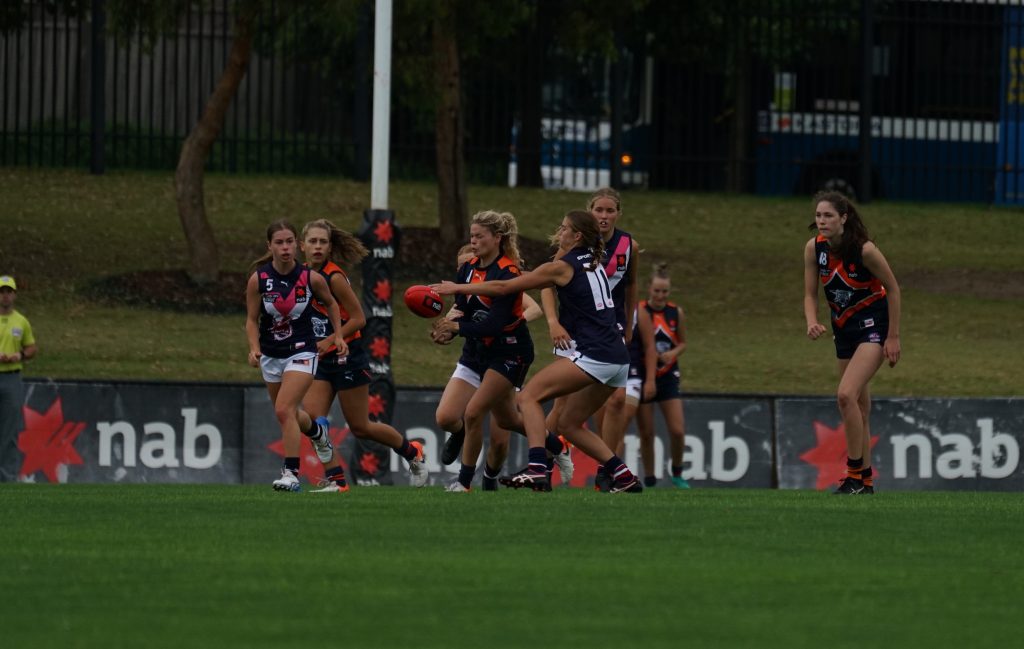 WITH an additional two matches and therefore four team efforts to pick from, cutting the Team of the Week for Round 7 (and partially Rounds 2 and 3) proved too great, and with so many individual standouts, Draft Central decided to divide its NAB League Girls Team of the Week into two. The Country and Metro Team of the Weeks represent the 13 teams in the competition, with Tasmania Devils joining Country for this special week. We have still named squads of 24 players, with 48 in total across the board. It is fitting that the two Team of the Weeks are named ahead of the AFL Women’s Under-19 Championships which begin over the next week.

Looking at the Country side first, the Dandenong Stingrays, GWV Rebels and Murray Bushrangers all had four representatives in the team. The Stingrays had bookends, Zoe Hill and Mackenzie Eardley, as well as exciting forward Amber Clarke, and the consistent Jemma Radford in the side. The Rebels were represented by the returning ruck Kalani Scoullar, as well as Nyakoat Dojiok, Chloe Leonard and Lilli Condon who have all made the team previously. Meanwhile the Bushrangers quartet is headlined by captain Aurora Smith, as well as India Lehman, Zara Hamilton and Ally Morphett for Round 7.

The four other sides have three each after all suffering defeats across the weekend. Bendigo Pioneers trio of Elizabeth Snell, Octavia Di Donato and Drew Ryan made the side, the latter for the first time. Geelong Falcons’ Tess Craven, Poppy Schaap and Annie Lee are no strangers to Team of the Week slotting in again, while the Power saw Matilda Van Berkel and Lily-Rose Williamson making the side again, and Yasmin Duursma making her debut in the Team of the Week. Finally, Tasmania Devils had Jemma Webster, Perri King and Claire Ransom in the 24-player squad, having all been past representatives.

From an emergencies perspective, Stingrays’ Felicity Crank, Falcons’ Taiya Morrow and Bushrangers’ Olivia Cicolini were next in line for the team. 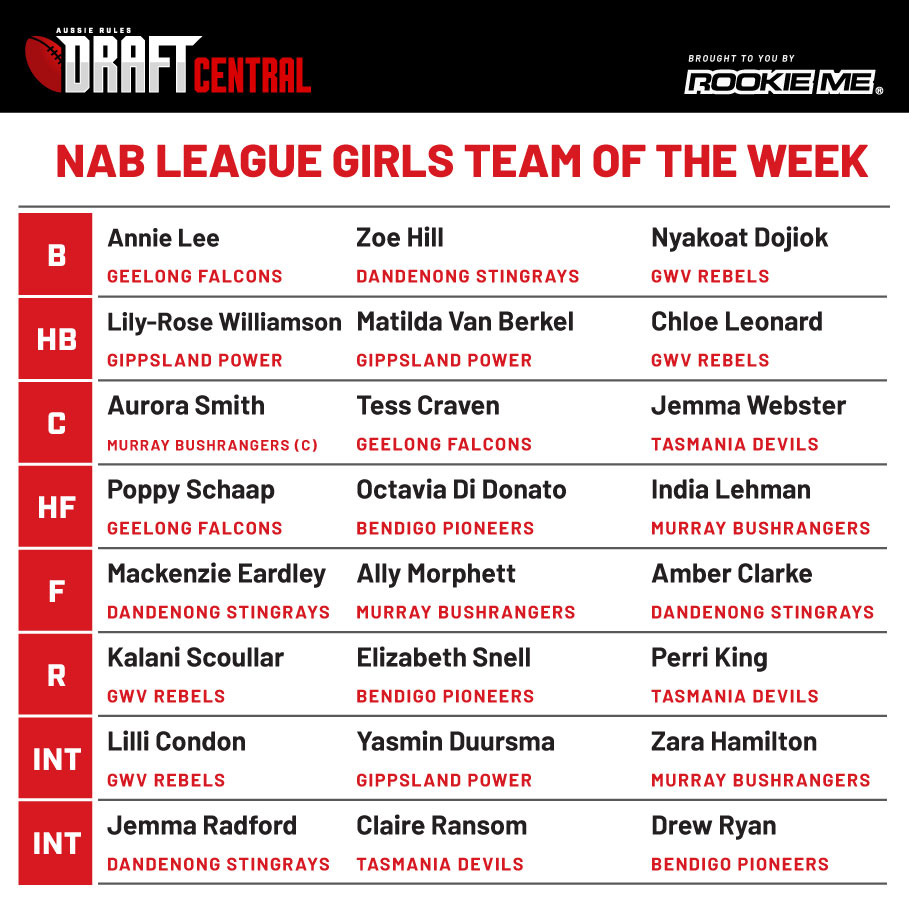 In the metro side, Eastern Ranges far outweighed any other team after two victories since last week. The defence alone has three representatives making the 24-player squad, as Cadhla Schmidli, Grace Walsh and Mia Busch are all in the back six, as classy forward Alyssia Pisano was in again, and Bridget Deed and Ruby O’Dwyer also made their way onto the bench.

Three teams had four players made the side with Calder Cannons’ quartet, Georgie Prespakis (captain), fellow midfielders Emelia Yassir and Zali Friswell, and key forward/ruck Tahlia Gillard also in the side. Oakleigh Chargers were well represented once again with Stella Reid and Brooke Vickers back again, this time joined by Amanda Ling and Lily Hart. Western Jets also had the four players in the side, of whom have all made it before in Charlotte Baskaran, Montana Ham, Krystal Russell and Jemima Woods.

The remaining two teams in Northern Knights and Sandringham Dragons both had three players apiece in the side. The Knights had a couple of Team of the Week debutants in Tannah Hurst and Riley Wilcox up opposite ends, who joined Maeve Chaplin in the side upon her return to the NAB League Girls competition. Meanwhile Sandringham Dragons’ Kiana Lynch and Chloe Saultry slot into defence after strong efforts, and Sofia Hurley made it onto the bench.

In terms of emergencies, Dragons’ Emma Stuber, Jets’ Kiera Leare and Chargers’ Charlie Rowbottom were slotted in as the most unlucky to miss. 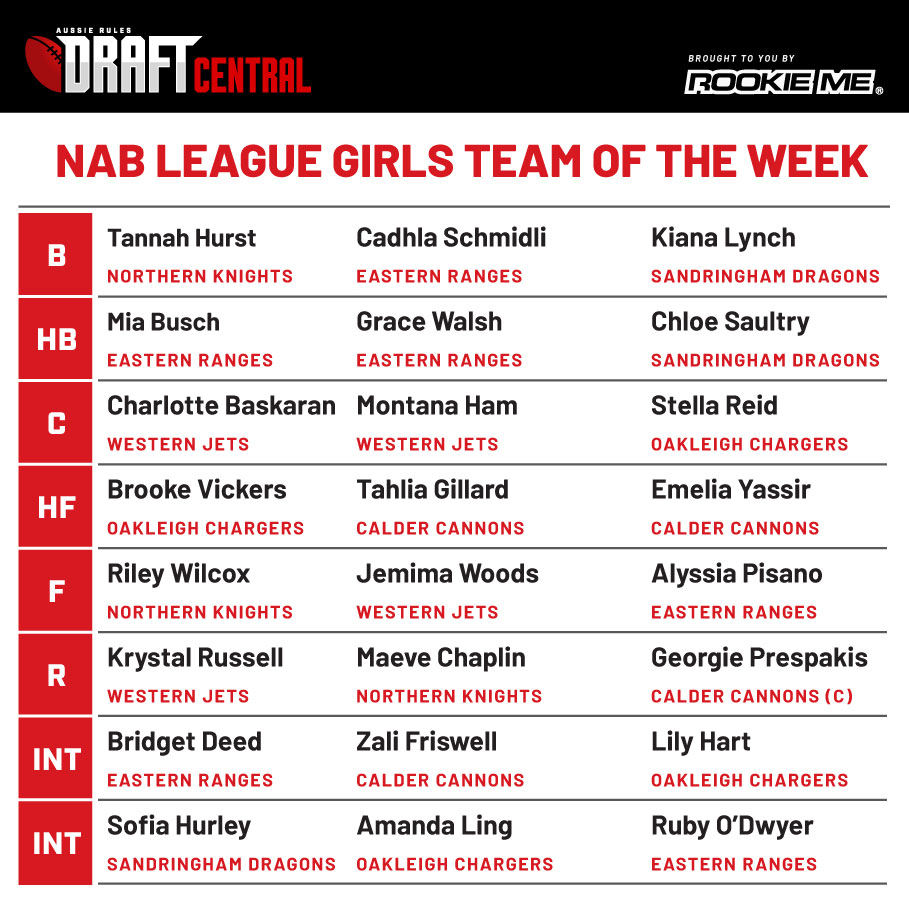