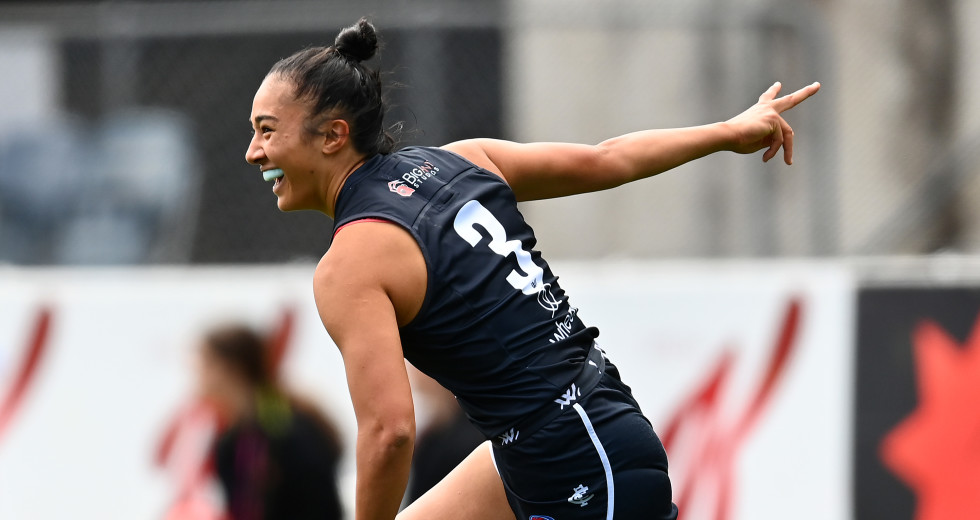 CARLTON star forward Darcy Vescio put on an absolute clinic at Metricon Stadium to lead the Blues to a dominant 60-point win over Gold Coast. Vescio collected 15 disposals and kicked a personal-best five goals in the performance, becoming the first AFLW player to boot 40 career goals in the process. If not for her unselfishness in the second half, Vescio could well have finished with seven or eight majors.

With a score of 13.9 (87), the Blues broke the AFLW all-time scoring record of 12.14 (86) set by the Western Bulldogs during their premiership-winning 2018 season. This was a must-win clash for Carlton to stay in the finals hunt, and a healthy percentage boost was always going to help their cause. The match marked the first time that Carlton has played outside Victoria this season, so it was going to be interesting to see how they came out of the blocks.

To the shock of many, it was Gold Coast who got off to a flyer. The hosts got the ball out the back of Carlton’s defence very easily in the opening minutes. Firstly, Samantha Virgo got out the back and dribbled through a clever goal on the outside of her boot, and then Maddison Levi sprinted onto the end of a kick over the top to put through the Suns’ second. Carlton’s defence was slow and shaky at the outset, while Gold Coast were getting first hands on the ball in the middle. After Drennan kicked the Suns’ third, Carlton lifted their intensity and were able shift the momentum. Gee produced some brilliant play down the wing to allow Vescio to kick the Blues’ first. Soon after, reigning AFLW Best and Fairest Maddy Prespakis missed a golden opportunity to kick the Blues’ second, so the Suns took a 12-point advantage into quarter time.

Vescio looked more dangerous up forward in the second, kicking two consecutive left foot snaps out of congestion to give the Blues the lead. While the Suns got multiple inside 50s, they were ineffective with their ball use going forward and Carlton’s defence put up much greater resistance. After Vescio missed a chance at her fourth from straight in front, first-year Sun Lucy Single made her pay by using her pace through the middle of the ground and kicking an incredible Goal of the Year contender. Despite this, Natalie Plane kicked a nice goal straight from the next centre clearance to give Carlton back the lead going into the main break.

Vescio opened the third with her fourth goal, and the Suns were immediately on the back foot. This is where Carlton opened up the margin, as they held the Suns goalless in the third term and kicked five goals of their own. Although Gold Coast could get the ball inside 50, Carlton repeatedly had numbers back and counterattacked with force. They went coast-to-coast and Lucy McEvoy steadied to kick her first, then Nicola Stevens took a strong contested mark and kicked truly. When Vescio set up Brooke Walker for another major, Carlton had kicked eight of the last nine goals for the game. Lauren Brazzale extended the Blues’ lead to an unrecoverable margin for Gold Coast at three-quarter time.

The ‘Vescio Show’ continued in the final term, as she took a classic high mark in the goal square and drilled her fifth. She then unselfishly set up ex-Demon Elise O’Dea for a goal with a handball over the top, and Plane kicked her second to bring the Blues to within striking distance of the AFLW scoring record. With under a minute remaining in the contest, Moody became the player to officially break the record by taking a contested mark and kicking truly from a set shot.

For Carlton’s finals hopes to remain alive, they must win their clash against GWS at Blacktown next Sunday and hope for other results to go their way. Meanwhile, Gold Coast will aim to end their difficult season on a high when they take on the bottom-placed Geelong at Metricon on Saturday.