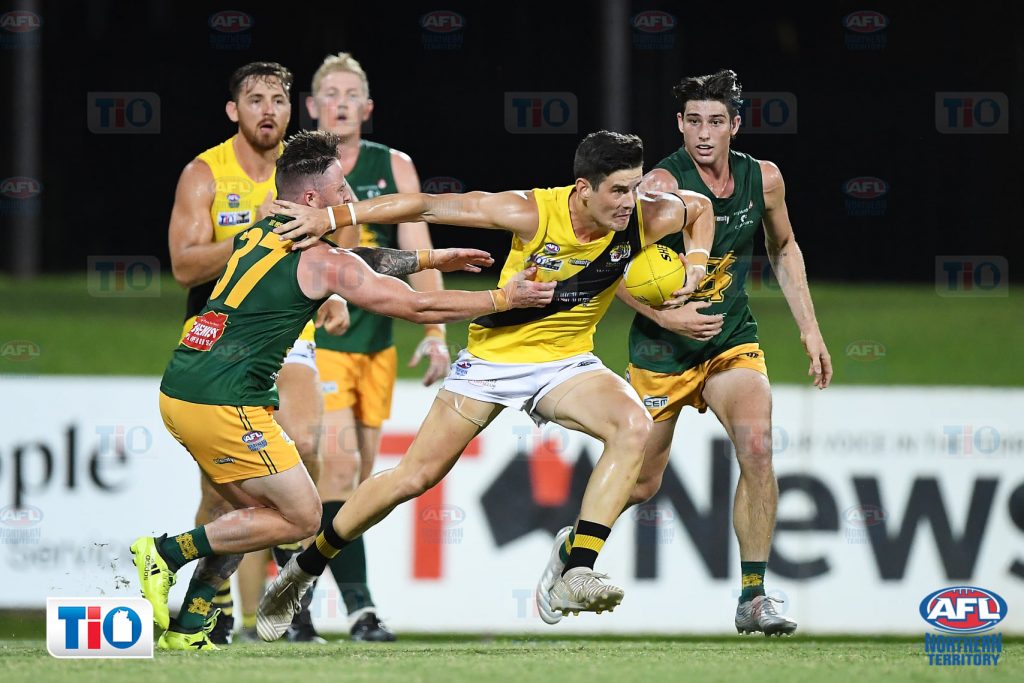 AFTER 18 home-and-away rounds and an enthralling finals series, the 2020/21 Northern Territory Football League (NTFL) Men’s Premier League premiership decider is upon us. A blockbuster grand final match-up is set to take place at TIO Stadium on Saturday night, as minor premier Nightcliff takes on St Mary’s in a clash between this season’s first and second ranked sides. We take you through the key numbers and players for both teams ahead of what should be a cracking day of NT football.

For the second season running, Nightcliff takes on St Mary’s in the NTFL Men’s Premier League grand final, this time looking to secure its third-straight premiership flag. The Tigers have once again set the benchmark and took out another minor premiership, with the opportunity to convert that honour awaiting them. But St Mary’s is no pushover and forms a formidable figure in the way of said feat, coming in as this season’s second-ranked side. Nightcliff holds a slight edge over its weekend rivals in 2020/21 with two wins in their three meetings, though the most recent bout was two months ago – back in Round 14. The Tigers’ scoring power has been fearsome once again, forming an irresistible force to match the immovable object that is their defence. St Mary’s will test those bookends though, with a strong midfield to match Nightcliff and the contested acumen which suits finals football. A thrilling encounter awaits.

The recently crowned Nichols Medal winner has enjoyed a superb season for the Tigers, delivering on a heap of preseason promise in his maiden NTFL campaign. A tough and combative midfielder with state league experience, Brew’s strong tackling game and ability to extract contested ball will perfectly suit the finals style. Expect him to prove a key cog in the Nightcliff engine room, which features four Nichols Medallists, as he has done all season.

Emery has enjoyed a stellar return to the Tigers’ den in 2020/21, slotting seamlessly into the forwardline and taking hold to as Nightcliff’s leading goalkicker. He is one of the many dynamic movers who can play a bunch of roles up forward or through midfield, but Emery’s irresistible scoring power will likely prove most important in this outing. Among his season tally of 58 goals, Emery has snared nine hauls of four goals or more, while being held goalless just thrice. He is difficult to stop at full flight and could be a game-winner.

Another of the Nightcliff Nichols Medal winners, Filo is consistently as classy as anyone afield and has been a reliable figure in the Tigers’ midfield. His creative nous and ability to hit targets going inside 50 will likely be a key factor in Nightcliff’s fortunes forward of centre, as that kind of ability is ideal amid the expected early chaos of grand final football. Named at half-forward, Filo is also able to hit the scoreboard and compound his overall impact.

Calder seems to be peaking at just the right time for St Mary’s, spearheading the green machine’s attack with 13 goals in the last fortnight. Overall, he tops the Saint’s goal charts in 2020/21 with 43 in 19 games and has the potential to prove highly destructive inside 50 with his ability to kick bags and provide good aerial presence. He has proven he can do it in tricky conditions too, so expect St Mary’s to constantly look towards him for a spark alongside Jackson Paine.

Among the best recruits competition-wide, Landt has enjoyed a superb season for the Saints and will look to cap it off in style. Alongside brother Jack, Landt has consistently featured in the votes for St Mary’s and given the rate at which he finds the footy, that is no surprise. Whether it be driving from half-back, bossing the midfield, or popping up with a handy goal, Landt makes his mark all around the ground and has been a level above many this season.

Perhaps one of the competition’s best midfielders to constantly fly under the radar, Paredes has long been a fantastic and reliable servant to the St Mary’s midfield. His ability to extract at the coalface and get the green machine going forward will again be crucial on grand final day, and his work rate on the inside allows teammates to shine on the outer. He should have no trouble finding plenty of touches and will inevitably end as one of the Saint’s best on the day out of pure consistency.