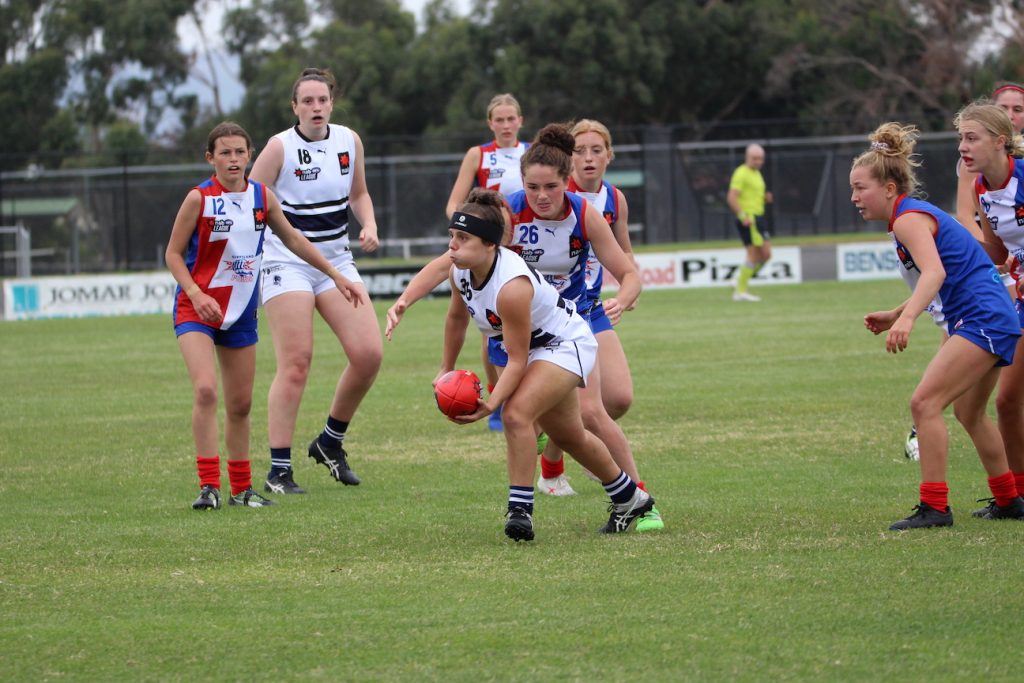 A BATTLE of the two winless sides, Gippsland Power and Murray Bushrangers, as well as the Sandringham Dragons and Western Jets must-win contest will be the two commentated games streaming on the NAB League app this weekend. The matches are all set to be beauties with plenty of 50/50 contests and difficult to predict how they will go down in Round 7 of the NAB League Girls competition.

Backing up from an impressive Wednesday night victory under lights at Casey Fields, Dandenong Stingrays make the trek up the highway to Epsom Huntly Reserve to take on Bendigo Pioneers. After snapping their two-game losing streak, the Stingrays have moved to 3-2 on the table, with a chance to join Calder Cannons on 4-2 fo the season if they get the win against the Pioneers. For Bendigo, they could move back within four points of the top eight sides and remain in contention for finals, having lost four straight games since their Round 1 win over Murray Bushrangers.

Captain Tara Slender is anticipated to return for the Pioneers for the big clash, with Octavia Di Donato and Tegan Williams among the more in-form players at the Pioneers in her absence a couple of weeks back when they last ran out on a Wednesday night themselves against Greater Western Victoria (GWV) Rebels at Epsom Huntly. Jayda Richardson has been utilised all over the field, while the Pioneers will be hoping to regain some of their top talents back from injury at some point, with Jemma Finning and Madeline Marks also out of the last game due to injury.

Dandenong Stingrays have now adjusted without midfield gun Emily Shepherd in there, and with Jaide Anthony also out of the side due to concussion – and will miss this clash – they have seen others step up. Charley Ryan was sensational for the Stingrays in the win against the Sandringham Dragons mid-week, while Zoe Hill showed she could play at both ends, and Ashleigh Richards and Amber Clarke looked ever-dangerous inside 50. Add in Abbey Jordan and Felicity Crank who are finding plenty of the ball of late, and the Stingrays have a well-balanced list.

Dandenong will head in as favourites against the Pioneers following the Stingrays’ defensive efforts during the week, though with the Pioneers back at home, they have the capacity to push any side as they showed a few weeks back against Calder Cannons.

A bottom two clash of the sides yet to grab a win in season 2021, at least one of the Gippsland Power and Murray Bushrangers must take home some points in this round. The Power have been gradually building over the first month, and – with the exception of their 114-point smashing at the hands of Eastern Ranges – have reduced the losing margin each week, whilst adding more scores on the board. The Bushrangers have been pretty solid across the season, competitive through most parts of the game, but just having a quarter or two here or there that sees the opposition add quick goals to blow out the margin. With the two teams to face-off, it will be fascinating to see who two young teams go at it.

The ruck battle immediately catches the eye, with Grace Matser and Ally Morphett set to go head-to-head in a clash of different styles. Matser has been finding more of the ball and moving well around the ground, while Morphett is hard to stop when she gets front position in a marking contest with safe hands. Key defender who can also play up the other end, Matilda Van Berkel has enjoyed a strong top-age season, while midfielder Grace McRae just keeps winning the ball. She will have a great battle on the inside with Keeley Skepper who has been building nicely in her bottom-age year, whilst Aurora Smith has been one of the most consistent players this season out on the wing.

Sunday Brisbane, Yasmine Duursma and Lily-Rose Williamson have provided the Power with plenty of run from defence and through the midfield, and they will be important in trying to bring the ball down in transition. The Bushrangers have a strong defence when it is all together, with Chloe Locke, Mindy Quade and Grace Hay among those capable of playing both offensive and defensive roles. Murray will look to Olivia Cicolini who has now kicked three goals in two games as a potential goal-scoring option, with Morphett also capable of dropping deep and converting set shots. Kristy Whitehead and Courtney Fletcher are among others who have impressed for their respective sides, often helping out in the back 50.

It is hard to pick a winner in this game because both have progressed throughout the year, but one thing is for sure, the winner will have plenty to celebrate.

An early morning game at RSEA Park pits Sandringham Dragons up against Western Jets in a must-win match for both sides with just two rounds remaining after this game. They are both 1-4 for the season and a loss will ned their chances of a finals birth, while a win puts them back in the conversation if they can build the momentum in the final fortnight. Both these sides come into the game off the back of low-scoring losses, with the Jets getting close to the GWV Rebels, and the Dragons pushing the Chargers before losing out to the Stingrays midweek.

Scoring will be a premium for these sides who have stacked up well defensively, but, with the exception of Sandringham’s win over Gippsland – has seen them both restricted from putting big scores on the board. The Dragons have the capacity to score big when they get the fast ball inside 50, with Charli Murphy (eight goals) and Ebony Angelopoulos (seven) being among the top goalkickers in the league. Mia Zielinski has slotted four goals in three games to be a talented Under 16 player and a third option in attack. For the Jets, they have shared their goals around, with Annie Gray and Caitlin Sargent both slotting three goals apiece, while Kensley Ward and Montana Ham have the two each.

Charlotte Baskaran combines with Ham as some of the better metres-gained players in the competition, with the head-to-heads against the likes of Charlotte Ryan and Tayla Jones who provide the same run for their sides. Sofia Hurley and Kiana Lynch win a lot of ball on the inside, with Hurley able to burst out of the stoppage, but also win the ball back through tackling. Now having two games under her belt, Bridie Hipwell will be looking to make a statement here, while the defensive duo of Abby Thompson and Ella Schiberras were steadfast against the tie on Wednesday night. The Jets will be looking to bring the ball quickly in transition, such as Paige Ryan in defence and Jemima Woods up forward and through the ruck.

Another 50/50 game, the winner is difficult to pick, but both teams can move the ball pretty quickly which makes for an exciting game.

Down the highway at Waurn Ponds, the Geelong Falcons will be keen to put last week’s disappointment behind them, when they were beaten by newcomers Sydney Swans Academy. The Falcons were without key bookends, Renee Tierney and Annie Lee who played in the VFL Women’s match, but were just not able to generate enough effective scores to take down the determined Swans. Northern Knights are coming off a spirited come-from-behind win over Eastern Ranges following a tight loss to Calder Cannons the week before. Northern will hope it can bring the same momentum into the start of the game against the Falcons rather than rely on a late final quarter flurry to grab the points.

The Falcons midfield brigade of Tess Craven, Poppy Schaap and Charlotte Simpson has been one of the most consistent trios running around, with Ash Van Loon being the most dominant tackler in the NAB League Girls competition. She came off sore last match, but the Falcons have plenty of depth across the field with Elizabeth Dowling and Taiya Morrow in defence, and Gabbi Featherston and Lucy Were in attack. Keeley Hardingham and Analea McKee both had strong games in the Swans’ loss, while Ingrid Houtsma missed out on the match and is another player to watch going forward.

Northern Knights’ Under 16s talent Ava Jordan has put together a really promising debut season this year, being one of the most consistent ball-winners through midfield. With Maeve Chaplin missing through injury, Jordan stepped up through the midfield against the Ranges, teaming up well with Tarrah Delgado who switched from full-back into the middle late in the game. Brooke Plummer has provided some great run and carry on the outside, and having Ella Smallacombe, Trinity Mills and Megan Girolami up forward as targets, gives the Knights midfield – including AFL Women’s Academy member Maykaylah Appleby – players to look for inside 50.

Geelong Falcons will be hungry to bounce back in this game, while the Northern Knights will be riding high on their last quarter from Round 6, and keen to back it up from the first bounce in Round 7.

The last game to kick off for the round is the big clash between GWV Rebels and Oakleigh Chargers at MARS Stadium. The Rebels will be hoping a home ground advantage can sway the game in their favour against an unbeaten Chargers outfit that has completed every challenge thrown at them. Oakleigh looks down on the rest of the competition with five wins from five games, while the Rebels have won three of five – including their past two – and will be heading in as underdogs to try and take down the premiership favourites.

Oakleigh Chargers have an array of midfield talent, led by inside ball-winner and powerful forward, Charlie Rowbottom who has not only been one of the better contested players, but has gone forward and kicked crunch goals, slotting six majors in five games this season. On the outside, Stella Reid has done a wealth of work across the ground, and slotted into half-back or half-forward when required as well as the wing where she predominantly plays. She has also hit the scoreboard with four majors, third behind Rowbottom and tall, Ameille Smith (five goals) in that areas. Up the other end, Alexander McCulloch and Brooke Vickers have won their fair share of ball and driven it outside 50, while Amanda Ling has become another prominent ball-winner for the Chargers.

The Rebels are a well-balanced side with great versatility, and have had some outstanding performers this season. A massive 11 players have averaged more than 10 disposals this season, with 10 of them playing at least four games. Chloe Leonard has patrolled the half-back line with Nyakoat Dojiok, while Lilli Condon has been a reliable accumulator in close and spreading well. Up forward, Paige Scott keeps kicking goals and now has eight to her name, while Tahlia Meier is averaging a goal a game, and their forward line spread has enabled Ella Friend to play up on a wing. Molly Walton has been a find for the Rebels on the last line as well, able to bring the ball from the danger zone to safety in her bottom-age season.

Oakleigh Chargers head in as favourites, but the GWV Rebels are every chance of causing an upset if they can continue their recent form and even team spread across the field.