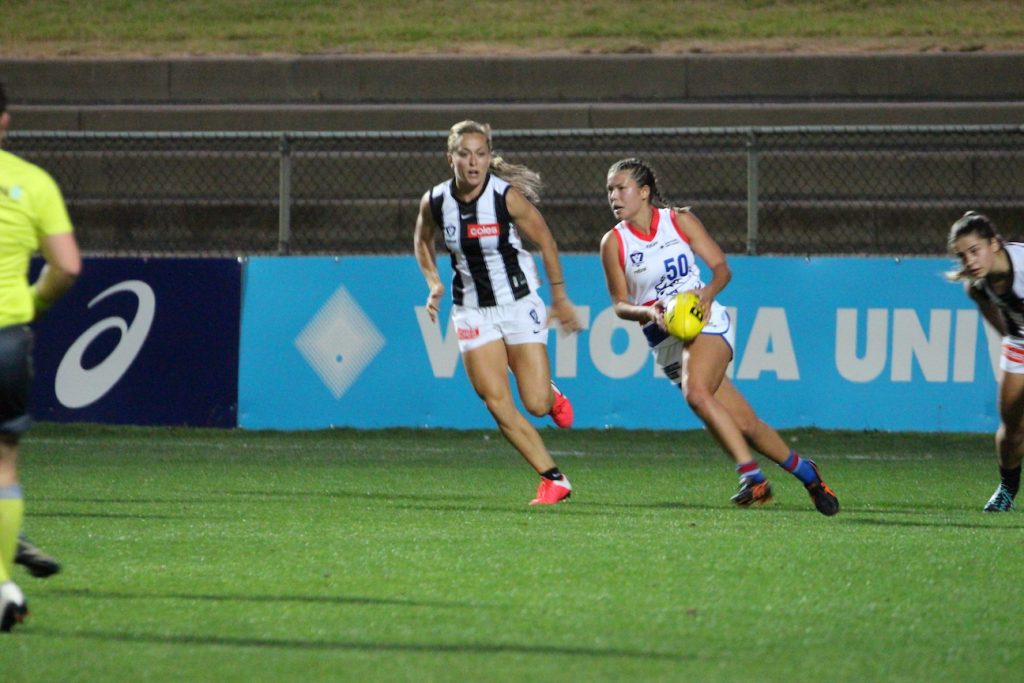 THE Victorian Football League (VFL) Women’s returned for Round 3 on the weekend, with another six enthralling fixtures spread over Friday and Saturday. As the season runs concurrently alongside that of the AFLW, top-flight players from Victorian clubs who miss out on senior action will be able to run out for what are effectively reserve sides in the VFLW. Round 3 saw promising elite level talent scattered across the eight aligned teams, with players again staking claims for call-ups.

Collingwood kicked off proceedings with a thumping win over the Western Bulldogs on Friday night, with senior-listed talent on the forefront of its triumph. Ruck-forward Bella Smith booted a game-high three goals, while wing-forward Sarah Rowe also hit the scoreboard in her return from injury, and Kristy Stratton proved influential through midfield. Amelia Velardo again played off half-back and copped a head knock in a hard tackle, but seemed unscathed.

The Bulldogs had another decent crop of AFLW players to choose from despite some key changes, with youngsters Annabel Strahan and Amelia van Oosterwijck roaming through midfield as father-daughter coup Isabella Grant kicked a goal up forward. Bailey Hunt was another player to make their return from injury and showed signs of her usual self.

The next all-aligned fixture saw Casey thump North Melbourne on its home deck, with elite level talent again impacting the scoreboard. Niamh McEvoy (three goals) and Chantel Emonson (two) showed their class at the level after being demoted, while young ruck Maggie Caris continues to string together strong performances. North did not have as as strong an AFLW presence, though Bethany Lynch stood tall in the loss.

A low-scoring slog at Deakin University saw Geelong beat Southern Saints by eight points in a game which saw just three goals kicked overall. The Cats again had a heavy rotation of AFLW players exit the side, but Laura Gardiner remained and got her hands dirty in midfield, with the likes of Maddie Boyd and Stephanie Williams also showing their wares in hopes of a recall. Speaking of recalls, Nadia von Bertouch may well be in line for one after her best afield display for the Saints, supported well by young Jess Matin.

There are even more positive signs for Richmond after the Tigers picked up their second AFLW win, with a bunch of senior players also impressing at state league level. Phoebe Monahan, Luka Lesosky-Hay, and Emily Harley were all named in Port Melbourne’s votes as the Borough beat Williamstown, while young forward Cleo Saxon-Jones booted a goal in her first outing for the year after long bouts of injury.

Carlton was the final aligned team in action on Saturday and managed to nab its first win of the season, defeating Darebin by seven points. Hard-running youngster Winnie Laing returned to the fold and fared well, as key forward Paige Trudgeon booted one of her side’s three goals and Jess Edwards was again strong rotating through midfield.