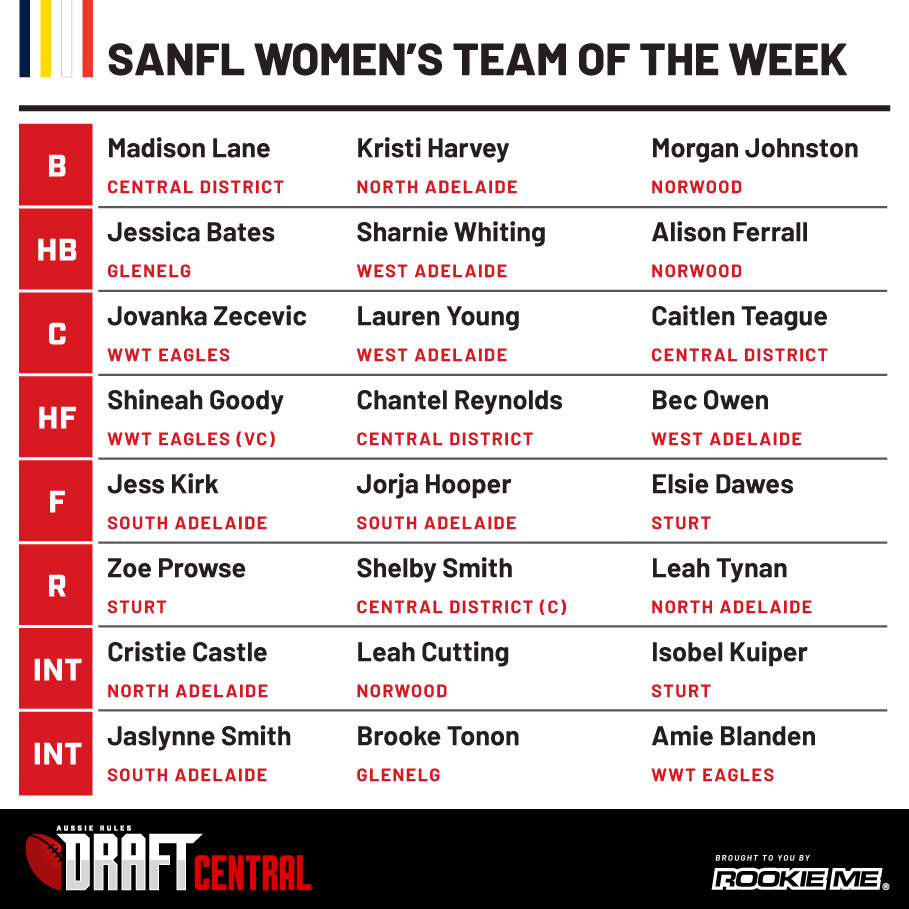 AN unbelievable contest between South Adelaide and Central District has seen the two sides net seven of the 24 players in this week’s Draft Central South Australian National Football League (SANFL) Women’s Team of the Week. The Panthers got up in that game by less than a kick but despite losing, Central District had four players, and South Adelaide had three make the side, while other winners, North Adelaide, Norwood and Woodville-West Torrens had three. Given the tightness of the games, it was no surprise to see unlucky losers Sturt and West Adelaide pick up three representatives, while Glenelg had the two.

The Friday night clash between the Bulldogs and Panthers saw seven players make their way into the 24-player squad. The successful Panthers had a couple of forwards make the side in young talent Jorja Hooper alongside Jess Kirk with the pair kicking two majors each in the win. On the bench, defender Jaslynne Smith made it onto the interchange, whilst the Bulldogs spread their players across the team. Midfielders Shelby Smith – who was named captain of the side – and Caitlen Teague both start in the side, as does young defender Madison Lane and forward Chantel Reynolds in the back pocket and centre half-forward respectively. Sophia Flanagan-Sjoberg came close to make the side, named as the first emergency for the team.

North Adelaide and West Adelaide’s top of the table battle on Saturday provided the next most players for our Team of the Week with six – three apiece – earning spots in the side. Full-back Kristi Harvey made the side for the third consecutive week, this time joined by Leah Tynan and Cristie Castle for Round 3. For West Adelaide, Lauren Young also made it for a third week, this time in the middle, while Bec Owen (half-forward) and Sharnie Whiting (centre half-back) were also named, with Whiting recording her third Team of the Week nomination. Youngster Zoe Venning was named as an emergency for this week.

Norwood and Sturt played out a thriller, also providing six players in our Team of the Week, with both teams having three representatives in the 24-player squad. In defence, Morgan Johnston and Alison Ferrall both slot in, while ruck Leah Cutting will team up with Zoe Prowse after going head-to-head with the Sturt ruck on Friday night. Prowse is into the team for the third successive week, alongside Isobel Kuiper (second successive week) and Elsie Dawes (debut in the team). Norwood’s Elisha Gallagher is another Norwood player who came close to squeezing into the side, named as one of the three emergencies for Round 3.

Woodville-West Torrens Eagles had a trio of players make the side after their win, as young gun Shineah Goody was named as vice-captain after an outstanding effort in the forward half and rolling through the midfield for the Eagles. Also in the side are Jovanka Zecevic (wing) and Amie Blanden (interchange) who could slot into the forward line or the ruck as she had to on the weekend. Glenelg had an even contribution across the board despite the loss, with Jessica Bates (half-back) and Brooke Tonon (interchange) both booking their spots in our Team of the Week.

DRAFT CENTRAL SANFL WOMEN’S TEAM OF THE WEEK: ROUND 3