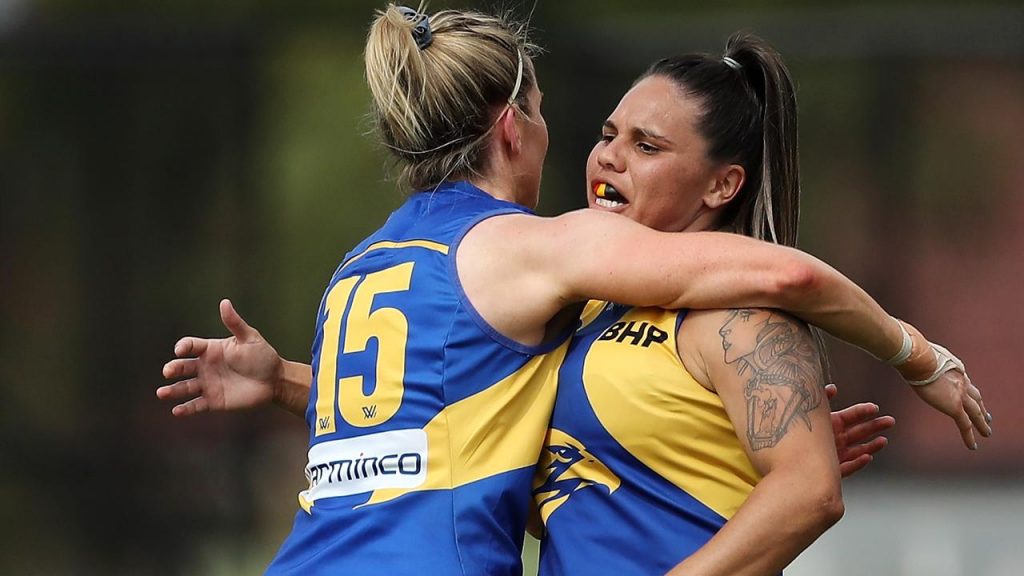 DESPITE a scrappy start to the game West Coast found their groove as the match got going, kicking away to a 39-point victory – their highest in history – defeating Geelong last night at Mineral Resources Park 8.5 (53) to 2.2 (14). The loss means Geelong still sit bottom of the ladder with zero wins to their name from seven outings while the Eagles have taken their season tally to two.

Controlling the play for majority of the opening term, it was inaccuracy that hindered the Eagles’ dominance only managing to record four behinds. Two of them could have sailed through for majors but desperate efforts from the Cats defence saw them touched off the boot while the other two simply did not have the accuracy. Geelong on the other hand struggled to find any form of composure with ball in hand not even registering a single behind for the opening term such was the pressure stemming from the Eagles.

After a disappointing start to the game, the Eagles well and truly flicked the switch with a dazzling quarter of football, headlined by Imahra Cameron. The West Coast forward set the field alight with her tenacity and goalkicking tendencies on full display nailing two goals in quick succession. She really set the wheels in motion as the rest of the team piggybacked off her energy and momentum to propel the ball forward and create attacking forays. Her work was not done however, popping up at the five minute mark to take a big contested grab coming in from the side and then kicking truly to push the Eagles out to a 21 point lead. Her second quarter heroics did not go unmatched with the Kelly sisters – Niamh and Grace – also plying their trade and proving to be key facilitators for the Eagles across the ground.

Goalless for the opening half of footy, the Cats were well and truly put on the back foot entering the third quarter and unfortunately it did not get any easier for the Victorian-based side as the Eagles maintained their level of composure. But some magic from Amy McDonald as the clock trickled down in the third saw the Cats get on the board. McDonald pulled out all the tricks, winning the ball out of the ruck, spinning out of a tackle and then banging it home to secure the Cats’ first major for the game. By that stage it was all still too little, too late as the home side had established a 33 point lead.

The final term continued much of the same as the Eagles pressed with their slick ball movement and speed out of the stoppage causing damage. Majority of the quarter was played between the two arcs as the ball ebbed and flowed up and down the ground with tired bodies coming to the fore. Grace Kelly nailed an impressive goal on the run to kickstart the final 15 minutes, but left the ground straight after with a suspected groin injury. Georgia Clarke added some respectability to the Cats’ scoreline with a major before Niamh really rammed home the win for West Coast to cap off an impressive performance from the Irish import.

It was hard to deny the influence of Emma Swanson who continuously popped up for the Eagles any time there was a ball to be won walking away with a team-high 21 disposals, six marks and eight tackles as Aisling McCarthy amassed 19 touches. Niamh Kelly had the ball on a string throughout the game and used her dash off half back to cause all sorts of trouble. Her ability to dart forward and utilise her speed to evade her opponents was impressive as was her strong hands, going up for multiple big pack marks finishing with 18 touches, two goals and three marks. Grace slotted two majors which accompanied her 12 touches and three tackles. Youngster Mikayla Bowen was electric (18 disposals, three marks, three tackles) while Maddy Collier contributed to the win thanks to her 18 touches.

Although it was a difficult outing for the Cats, McDonald impressed slotting the first major for her side while also collecting 24 touches and six tackles. She was ably assisted by Rebecca Webster who managed 16 touches as Renee Garing also made her mark thanks to her 13 disposals and five tackles. The ever-reliable Meg McDonald was once again a pillar of consistency despite having her work cut out for her, picking up 13 touches and three tackles.