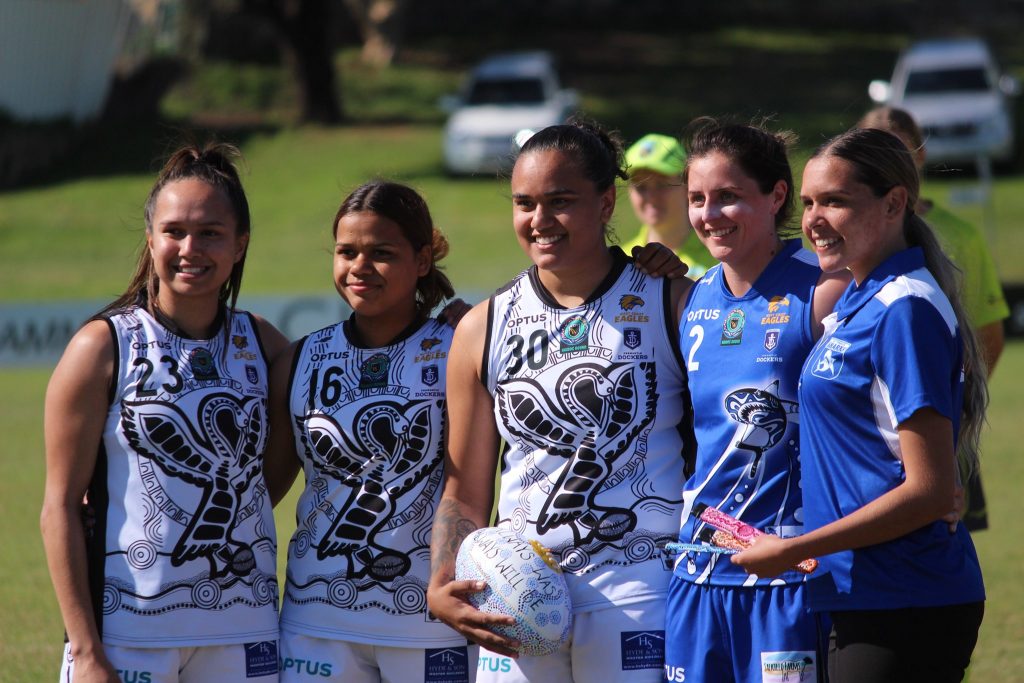 SWAN DISTRICTS have remained undefeated in the West Australian Football League (WAFL) Women’s competition, posting an impressive 28-point victory over East Fremantle at New Choice Homes Park yesterday in NAIDOC Round. The Swans headed into the clash at 3-0, while the Sharks won their first game of the season last round to get on the board at 1-2. While the visitors ended up pouring on four of the last five goals of the game, it was anyone’s match up until the last 10 minutes of the game.

The Swans did not waste any time getting on the board with Taylah Edwards soccering through a major just 90 seconds into the match. East Fremantle kept peppering the goals and dominating possession throughout the mid-part of the quarter, but once the Swans took control and locked it inside their own forward half, it took the lightning quick hands of Nyra Anderson and the silky boot of Mikayla Morrison to banana home a magic goal with one minute left in the term.

Swan Districts lead by 11 points at quarter time, but East Fremantle showed it was up fo the fight, as a dropped mark by Sarah Wielstra inside defensive 50 allowed Evie Gooch to pounce and slam a goal home from 40m out. Soon youngster Gabby Radojkovich was on the board to double their score, making multiple defensive efforts before turning and kicking truly to put her team in front. Swan Districts controlled play for the remainder of the quarter, but could only manage the three consecutive behinds to go in front with four minutes to play and take a narrow one-point lead at the main break.

Still in front but facing their stiffest challenge yet, the top of the table Swans showed why they are yet to drop a game with three consecutive goals in the first half of the term. First it was Bella Edgley – after being well held in the first half – who took a fantastic contested grab between two opponents and slotted the goal, then it was the one-two from Wielstra and nailing a major off a few steps, before Morrison benefited from a Tara Stribley run and Edgley deep kick to make it three on the trot.

With the third term winding down, it looked as though the 22-point lead would be a massive barrier coming into the final term, but then the experienced Gooch had other ideas, slotting back to back majors. Both were the perfect small forwards goals, staying down, reading the drop at the back of the back and running into an open goal, or finding the space to slot them home. By the time the siren rang after her second, the Sharks deficit was back to a manageable 10 points.

The first major in the contest was crucial for both sides, and it was Hope Ugle-Haward who hit one of the least pretty set shots you will see with a low floater, but it proved effective and the six points were added to the Swans score. One of the plays of the day came from East Fremantle not long after as Chloe Reilly was on the end of a series of fast disposals to get it deep and her athleticism and footy IQ did the rest, kicking it from the goalsquare to cut the deficit to under two kicks again.

While East Fremantle was back in it, that would soon be snuffed out as Danielle Wright and Dana East would combine brilliantly, and Mikayla Morrison‘s (third) and Sarah Wielstra (second) would also add additional majors to their name in the quarter. The final margin was a strong 28 points, but the 9.8 (62) to 5.4 (34) victory in favour of the Swans was anything but easy.

East was absolutely outstanding throughout the contest for the Swans, standing up in crunch moments alongside fellow youngsters, Sarah Lakay and Jessica Cox. Bianca Webb and Aimee Ralph were also named amongst the bests for their efforts, while Emily McGuire did as she pleased off half-back. For the Sharks, it was no surprise to see Gooch named as best-on for her three goals, while Sharon Wong, Marni Alston and Kahra Sprylan were also impressive in the victory.

In other results, Peel Thunder and Claremont both increased their lead in the top three, gaining their third wins of the seasons. The Tigers won their third on the trot with a 20-point victory over Subiaco, getting up 7.4 (46) to 4.2 (26). Leading by only a goal at half-time, the Tigers booted three goals to one in the third term to gain separation and set up the win. Amy Franklin slotted three goals in her best performance of the year for the visitors, named amongst the best with Sasha Goranova (one) and Kate Orme (one), while Brooke Whyte and Matilda Dyke also impressed. Sarah Garstone and Madeleine Scanlon were the other Tigers’ goalkickers. For the Lions, Kia Buckley kicked a major and was named amongst the best, with Abbey Dowrick, Amy Hunt and Beatrice Devlyn also hitting the scoreboard. Caitlin Walker, Claire Ortlepp and North Adelaide premiership player Katelyn Pope were also in the team’s best.

Meanwhile Peel Thunder piled on 13 goals in a high-scoring 41-point win over South Fremantle. The reigning premiers bounced back from their first loss of the season in style to have 19 scoring shots, and kick seven and six goals in the respective halves, and record a 13.6 (84) to 7.1 (43) victory. Kate Bartlett‘s ridiculous goal-streak continued with three more majors in the game, as Bailey Molloy (three) and Ella Roberts (two) also kicked multiple majors. Chloe Wrigley, Courtney Rowley, Jade Briggs, Greta McKinley and Kaitlin Hayes all kicked majors for the winners. Ebony Bilcich was named best-on for Peel, while Rowley, Molloy, Bartlett and Skipper Van Peer also stood out. South Fremantle’s Ashleigh Reidy slotted two goals, amongst a host of individual goalkickers. Lauren Wakfer, Zoe Huggett and Kiara Templeman all kicked majors and were named among the best, while Aaliah Ugle and Sheridan Kowald also added their names to the goalkicking list. Pia Durk and Makaela Tuhakaraina were also impressive despite the loss.

Round 5 action kicks off on Friday night with an all-Fremantle clash between the Bulldogs and Sharks, before Claremont and Peel thunder lock horns on Saturday, and Swan Districts and Subiaco face off on Sunday.