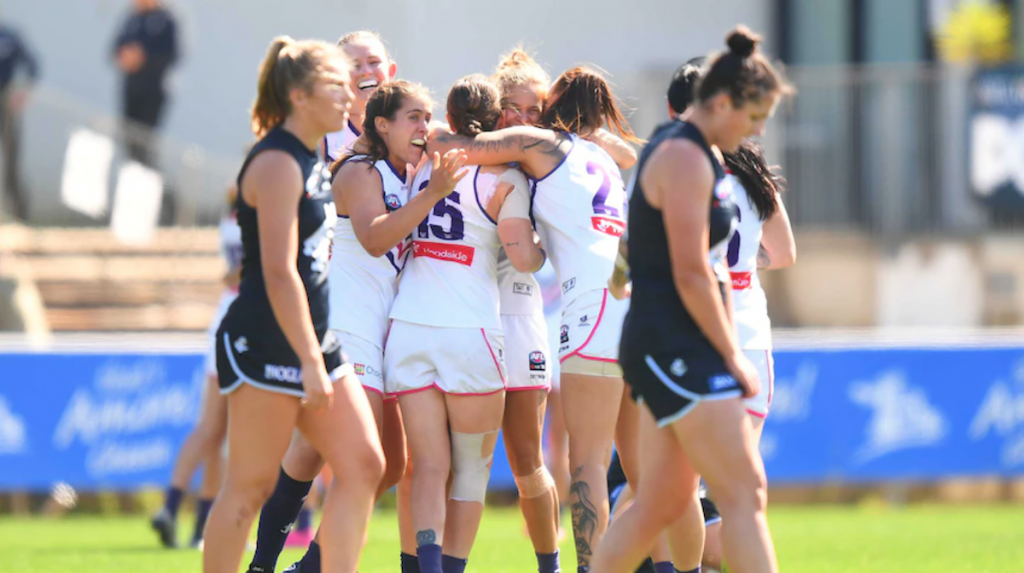 FREMANTLE proved just how good they are with a huge final quarter effort against Carlton on Sunday, downing the Blues by four points credit to a three goal final term. The 6.9 (45) to 6.5 (41) outcome was not a reflection of majority of the match however, with Carlton’s explosive start and continuous pressure well and truly shutting down the Dockers.

In a must-win for Carlton, the side came out firing from all cylinders with three goals to nil in the first as experienced trio Nic Stevens, Darcy Vescio and Tayla Harris were quick to get on the board, as Charlotte Wilson and Mua Laloifi well and truly shut down the Blues backline and relegated the Dockers to just the one behind. A tighter second quarter was credit to Fremantle’s increased pressure around the footy, lifting in intensity and contesting much better as Kiara Bowers, Hayley Miller and Sabreena Duffy stepped up to win the quarter. The winning end continued in the third as the Blues once again lifted, adding another two majors to their tally, but it was an outstanding final quarter from the Dockers that saw the side really showcase what they are made of and their winning form, booting 3.2 to Carlton’s 1.0 to take their first and only lead of the day at a vital time in the match and coming away with the four point win.

For the winning side, it was a two goal effort from both Jasmin Stewart and Duffy that helped get the side over the line, whilst Gemma Houghton was kept quiet for much of the contest bar a late conversion to seal the win. Bowers was exceptional with 28 disposals and 10 tackles, while Miller (13 touches and 10 tackles), Ebony Antonio and Steph Cain also had an impact. For the Blues, Stevens booted two from 14 touches, whilst Kerryn Harrington was kept busy with 22 touches and Breann Moody collected 19 and six marks, as Maddy Prespakis stepped up once more to create chaos through the middle.

Bar fixture changes due to COVID-19 protocols interstate, Carlton will hope to take on Gold Coast next Friday night in Queensland, while Fremantle will host Melbourne next Sunday night in a do-or-die encounter for the red and blue.

A last minute fixture change saw the Brisbane Lions take on the Collingwood Magpies on neutral territory in Melbourne on Sunday afternoon to complete the round, with the Lions taking to Whitten Oval and its lack of crowd like a duck to water, exposing the Magpies in a relatively inaccurate encounter from two of the top sides. The Lions dealt the Pies their first loss of the season, running out three-point victors in the 4.11 (35) to 4.8 (32) matchup in windy conditions.

It was a shocking first quarter from the Lions, booting eight behinds in a huge start that they really did not capitalise upon. The Magpies, to their credit, kept their foot on the accelerator and proved that they could cope defensively but it was realistically Brisbane’s inability to convert off set shots that shot them in the foot, only leading by 13 at the first change despite dominating the inside 50 count. Despite the Magpies applying better pressure for the remainder of the match, their first quarter struggle was too much for the side to come back from even as they kept the Lions to a goal per quarter in the second and third, and put just the one behind on in the last. The Magpies rallied in the final term after losing Jordyn Allen and Lauren Butler before the second half began, mounting their comeback and booting 2.4 in the final term. But it was too little, too late as the Lions held on for the three-point victory, knocking the Magpies out of top spot with huge performances from Ally Anderson (26 disposals and four marks) and Cathy Svarc (10 disposals, five tackles and a goal) topping off a solid day at the office.

Svarc was largely responsible for keeping Bri Davey quiet as Chloe Molloy was also relegated to a quiet performance with just five touches to her name. Sophie Conway (15 touches, three behinds), Nat Grider (13 and six tackles) and Emily Bates (13 and nine) were all impressive for the Lions as Bree Koenen locked down the backline, while for the Pies it was Britt Bonnici (28 touches, five marks and four tackles), Jaimee Lambert (22 touches) and Sharni Norder (Nee Layton, 17 touches, four tackles) who kept the ball rolling.

Next week the Magpies will play yet another match in Victoria as they host St Kilda on Saturday afternoon, while the Lions intend to host North Melbourne during Saturday’s twilight fixture, pending COVID-19 protocols in Queensland.