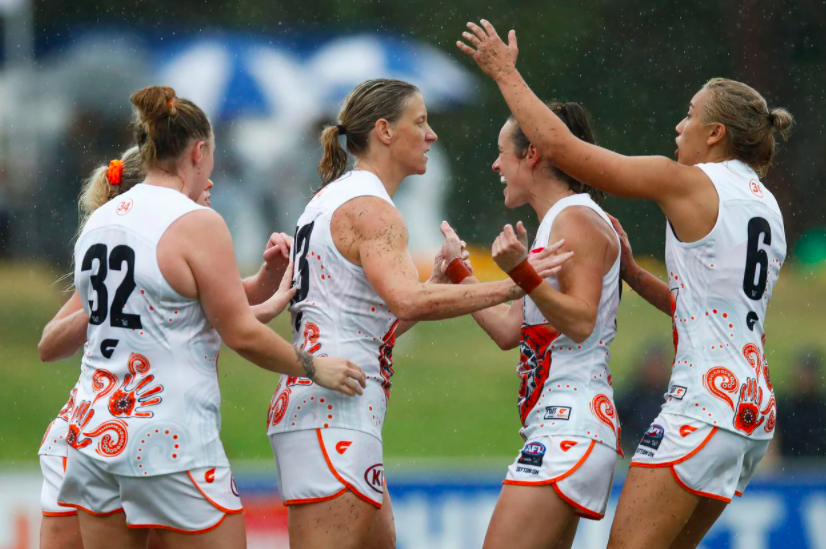 GWS GIANTS have picked up an important victory on the road, downing St Kilda Saints by 20 points in a traditional wet weather match at RSEA Park. Despite being a mid-afternoon fixture, both sides soon found the going tough with heavy rain impacting the match and drenching not only the players, but the supporters in the almost exclusively outdoor viewing venue. By the time the final siren sounded for everyone to dry off, the GIANTS had got the job done, 7.3 (45) to 3.7 (25).

Coming back into the line-up Rebecca Privitelli made her presence felt with a goal in the opening three minutes with a clever snap to get the visitors on the board. Soon it was new recruit Katherine Smith who doubled the margin, before Cora Staunton, and then Privitelli with her second piling on the pain for the home team at Moorabbin and making the quarter time margin a massive 23 points. The Saints were held goalless in the opening term, and it would not be until Kate Shierlaw struck in the third minute of the second quarter before the home crowd had something to cheer about. Back-to-back behinds to Molly McDonald, and then Jacqueline Vogt‘s miss left some wondering if they might rue the misses, though the conditions were not making it easy on the players. When Darcy Guttridge finally put one through the big sticks at the 11-minute mark, followed by a late Tamara Luke behind, the Saints had clawed their way back to a five-point deficit at the main break.

The third term was an arm-wrestle as neither side could get on the board in the first half of the quarter, and it took some Staunton class in the wet for the GIANTS to gain some much needed breathing space. Then inclusion Privitelli booted her third, and the pair had five of the six goals for the GIANTS, and the lead was back out to 20 points at the final break. When Staunton matched Privitelli with her third major of the contest two minutes into the final term, the game was effectively done and dusted, and the GIANTS were out to a match-high 26-point lead. The final score of the match was a late goal to Caitlin Greiser who slotted one to cut the final deficit to 20 points, but it would be the orange and charcoal visitors who would be making a Big Sound from Tullamarine back to western Sydney.

The wet made it challenging for disposal efficiency, with the GIANTS able to win more of the ball with a plus-28 in that category, and despite having two less inside 50s (23-25) won the rebound 50s count comfortably (22-15). They also dominated the contested possessions (120-86) and won the uncontested possessions as well (80-63), taking five contested marks of 24 to the Saints’ one of 14. To the Saints credit, the home side dominated the tackle count wit ha. whopping 103 tackles to 46, which ensured the GIANTS did not have many easy exits.

Alyce Parker and Georgia Patrikios thrived in the wet for their respective sides, as Parker racked up 28 touches, six marks and four tackles, while Patrikios was not far behind with 27 disposals, one mark and 10 tackles. Catherine Phillips laid a huge 12 tackles to go with her 15 disposals for the Saints, while Alice Burke also hit double-figure tackles with 10, the same amount as her disposals, as did Tyanna Smith (a match-high 14 tackles for nine disposals. Jayde Van Dyk (14 disposals) and Tilly Lucas-Rodd (11 disposals, six tackles) also impressed, while for the GIANTS, Rebecca Beeson (18 disposals, two marks and six tackles), Jess Dal Pos (15 disposals, two tackles), Britt Tully (14 disposals, two tackles) and Tarni Evans (11 disposals, two marks) all found plenty of it. The combined six goals of Privitelli and Staunton proved crucial for the GIANTS in wet conditions, with the pair also combining for 21 disposals and six tackles in the win.

NORTH Melbourne held off a determined Western Bulldogs outfit on Saturday, earning an 11-point victory at North Hobart Oval to strengthen its spot in the top six. The Roos skipped away to a three-goal buffer at quarter time and while they led at every break, were challenged in the final term as the Bulldogs pressured with five scoring shots to nil, but ultimately came up short in the 5.7 (37) to 3.8 (26) result.

The young pups were made to rue early lapses and a lack of killer instinct once the game was on their terms, seeing North Melbourne hop to an unassailable lead before holding out despite a scoreless final stanza. It means the Bulldogs have it all to do in the final couple of home-and-away rounds, currently sitting a game and percentage outside of the top six and with a couple of teams breathing down their necks.

Superstar Roos Emma Kearney and Jasmine Garner again showed their class to lead North to victory, with the former booting a couple of clutch goals in the process. The latter, meanwhile, led all comers with 28 disposals. Ash Riddell was another of the midfield brigade to snare a major, while Ellie Gavalas proved productive playing in her home state and Jess Duffin had her best outing since returning in Round 5.

Spearhead Izzy Huntington returned to scoring form with two of the Bulldogs’ three goals, as partner-in-crime Bonnie Toogood snared the other. It was no surprise to see skipper Ellie Blackburn and the hardened Kirtsy Lamb top their side’s disposal charts once again, proving reliable figures in midfield. Speedy forward Kirsten McLeod suffered a head knock late in the piece and did not play any further part in the match.

Both sides will prepare to take on top six opposition in Round 8. North faces a slightly shorter turnaround for its next match as Brisbane awaits at the Gabba on Saturday, while the Western Bulldogs are also set to travel to take on Adelaide at Norwood Oval on Sunday.

DEES TURN UP THE HEAT TO CLIP CROWS

MELBOURNE consolidated its top six status with a stirring 28-point win over fellow contender, Adelaide at Casey Fields on Saturday night. In damp conditions on their home patch, the Demons turned up the heat with a terrific pressure game and discipline in their structure to down the star-studded Crows 6.7 (43) to 2.3 (15).

Adelaide was essentially beaten at its own game, unable to get on top in midfield and being strangled up forward with two goalless quarters. Meanwhile, Melbourne led at every break and continually applied scoreboard pressure to earn a victory which does wonders for its finals hopes with just a fortnight left in the home-and-away season.

Young midfielder Tyla Hanks was at the core of her side’s triumph, bossing the engine room with a game-high 25 disposals to go with four marks, five tackles, and one goal. The likes of Lily Mithen and Karen Paxman also ticked over 20 touches, while Kate Hore‘s forward nous was good for three important goals, and Eden Zanker proved lively with four marks and a major.

Ebony Marinoff led the Crows disposal count with 24, aided as usual by Anne Hatchard through midfield. Sarah Allan was kept busy in defence along with Angela Foley, while champion Crows Erin Phillips and Chelsea Randall did their best to create some sort of spark moving forward. While the latter booted a goal, the Phillips finished without one for the first time in 2021.

The Crows will look to regroup and rebound with another tricky test against the Western Bulldogs in Round 8, while Melbourne faces another massive test in the form of Fremantle. Both sides are set to play on Sunday evening.