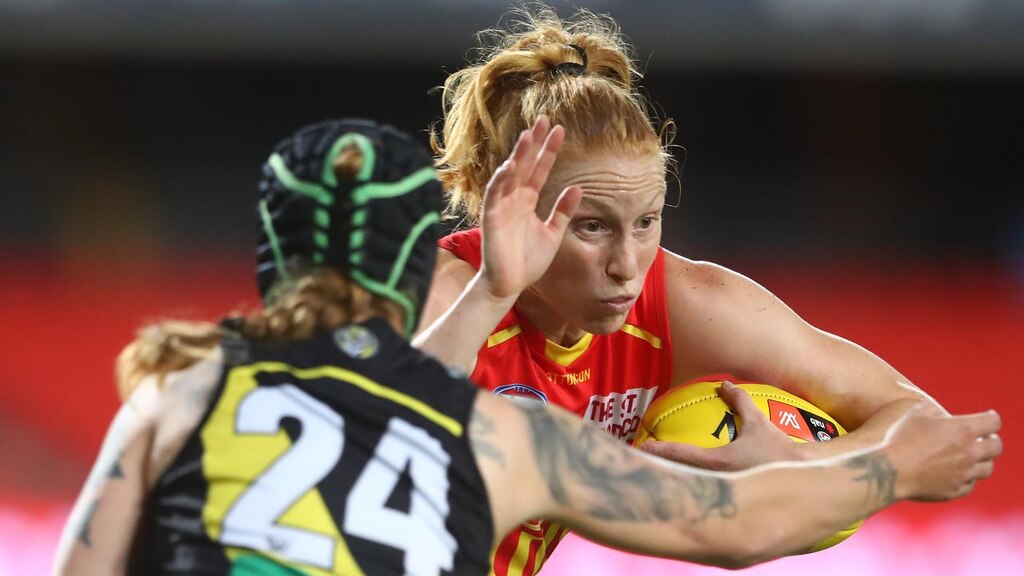 AFL Women’s Round 7 started with a bang with a huge friday night matchup at Metricon Stadium between the Gold Coast Suns and Richmond, as one side was hoping to put a win on the board in 2021, and the other looking to build off its maiden victory just two weeks ago. Despite a couple of exciting moments from the home side it was the Tigers that won their second match to make their historic 2021 even better, with a 6.5 (41) to 4.2 (26) victory.

It seemed to be the Suns that had much of the early control, and whilst the Tigers had plenty of the footy, their early chances were wasted as the tight pressure through midfield kept the footy moving. Lauren Ahrens had the tough task of taking on Katie Brennan, with Suns’ Maddison Levi and Lucy Single putting in the hard yards early as Mon Conti, Sarah Hosking and Harriet Cordner did the job for the Tigers. But it was Levi who ran in for an open goal to kick off the scoring ledger, as the constant Suns buffer across half forward became too much for the Tigers to cope with. Sloppy delivery from both sides saw neither team really control proceedings, and while a Brennan conversion saw the score go back to even, it would be the side that found separation in midfield that would really control the match with tight bodywork making it tough to clear the footy.

A Hosking minor score opened the second quarter, marginally leading the term with the Suns’ tackling efforts not quite doing the job and instead drawing too much attention from the umpires. Plenty of hustle saw neither side able to take control through the centre, with the footy rebounding between the two 50m lines and little relief on the marking front. After a couple of strong efforts Courtney Wakefield got a chance on goal from directly in front and did not disappoint, taking the margin out to seven points as the Tigers were rewarded for their constant efforts inside 50 across the first half of the quarter. Jade Pregelj made her mark though with her tight pressure on Wakefield, limiting the forward from easy marking chances, but under siege inside 50 there was only so much the Suns defensive unit could do to limit scoring chances as Brennan put her second on the board. The foot race between Cody Jacques and Kalinda Howarth was fascinating with both players putting their hand up to control the footy through the centre, but it seemed the Tigers had all the momentum credit to continuous efforts from Conti, Brennan and Ellie McKenzie. A 2.1 second quarter saw the Tigers lead the charge at half time by 15 points.

The Suns needed to command control in the second half, and that was exactly what they did within the first 30 seconds of the third quarter, as Levi booted her second for the match credit to an early clearance and inside 50. Despite the fast start the two sides entered a stalemate with neither side really able to change the scoreline, both tackling hard but once more unable to find separation through the centre of the ground. But a Kate Surman major tipped the ledger back the Suns’ way, with the 15-point lead whittled down to three points midway through the term, with their marking efficiency getting better as the match continued. The Suns home crowd began to make itself known as the contest heated up, with better passages of play giving the Suns fans plenty to be excited about. But a Christina Bernardi goal credit to a great setup from Tessa Lavey soon put the crowd to rest, extending the Tigers lead once more to nine points with a couple minutes left on the clock before the final break. The Tigers added another minor score to their tally before the quarter ended, with the hard-fought term setting up a huge fourth quarter.

A tough first five minutes on the clock saw McKenzie pile on the pressure with another Tigers major to open up the scoreline, before Brennan followed it up with her third major of the game as the Tigers ran away with victory. One last Suns goal upped the spirits for the home side but it was short lived, as the Tigers ran away with a 15-point victory, 6.5 (41) to 4.2 (26).

For the winless Suns, Ahrens and Alison Drennan were workhorses with 21 touches apiece, whilst Howarth (18 disposals), Surman (16 and a goal) and Levi (two goals and nine tackles) also made their mark on the match. On the Tigers front, Conti (25 touches) alongside Kate Dempsey (22 disposals), Hosking (21) and McKenzie (20 and a goal) controlled proceedings. Lavey had plenty of impressive moments in just her fifth match, while Brennan’s three goals were crucial.

The Suns will look to go one better here next Friday night when they host Carlton, whilst the improving Tigers will have a chance to go back-to-back when they host West Coast Eagles next Sunday afternoon.