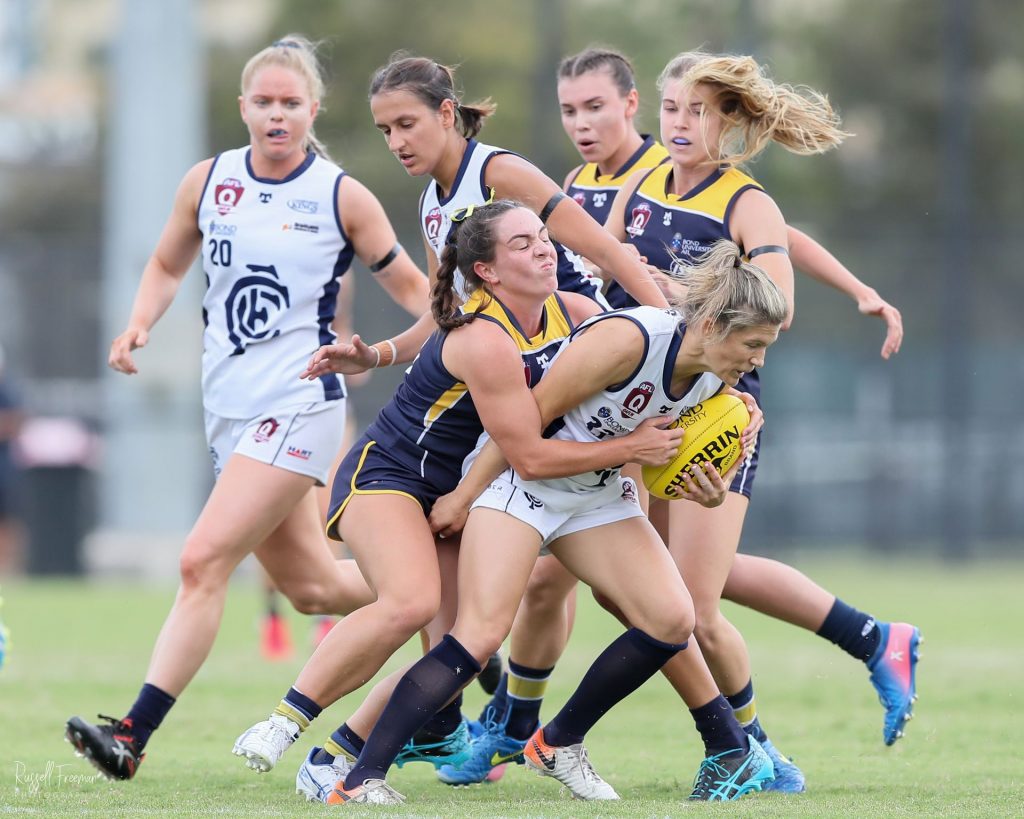 AFTER the eight completed games went the way of four sides, and the ladder is split down the middle with half the competition at 2-0 and the other half at 0-2, the Queensland Australian Football League (QAFL) Women’s Round 3 action is sure to close the gap between the top and bottom haves of the ladder.

The first of two matches between teams with contrasting starts to the QAFL Women’s season, the reborn Aspley Hornets are sitting pretty at 2-0 and second overall on the ladder, coming up against Wilston Grange who are seventh with two losses coming into the clash. The Gorillas have conceded the most points of any side, allowing 165 at an average of 82.5 so far in the season, whilst averaging 25 points per game themselves. For the Hornets, their defence has held up by conceding just 17.5 points – ranked first – while averaging 51 points themselves, the clear second best in the competition. Courtney Daniec in midfield will be a crucial player for the Hornets they look to go to 3-0 this season, teaming up with Lara Mason up against Kaitlyn Day who returns after missing Round 2, and the in-form Mackenzie Findlay for the Gorillas. Ruby Svarc is an experienced player named on a wing with Rheanne Lugg also having top-level experience and will be strong in the clinches. Morgan Lanigan was impressive for the Hornets in the win over Coolangatta Tweed and will be hoping to build on that in Round 3, while Melissa McPhee has been in sensational form. The Hornets are favourites in this one, and while they will be missing some talent due to the Under 19s Academy being in Victoria, they have proven to be the real deal in season 2021.

The other 2-0 against 0-2 clash is when Bond University travels to Eximm Oval hoping to remain undefeated against Coolangatta Tweed. The Bluebirds are on the bottom of the table after a slow start to the season, averaging the 8.5 points for and 57.5 points against, but with a new-look side featuring plenty of fresh faces and less AFL Women’s talent from their run to the grand final last year, they are still finding their feet and gelling this season. Bond University have the two wins on the board, but have got the job done in a couple of close ones, averaging the 38 points for and 26 against, so the Bluebirds would fancy their chances, especially with the likes of AFL Women’s Academy member Mikayla Pauga out of the Sharkettes side for another week due to her Academy commitments. Nonetheless, the visitors have had plenty of contributions from a scoring perspective with Eloise O’Brien and Gabrielle Deller both kicking a goal a game in their first two matchers. Shannon Danckert has also proven to be an important player, as has Lucinda Pullar who has been named in the best on both occasions. For Coolangatta Tweed, AFL Women’s talent Beth Pinchin has been a star, while Selina Priest and Kitara Farrar provide that extra experience when running around. Unfortunately wholesale changes last week – just nine players have played both games – meant gelling was always going to be difficult early. Maggie O’Connell got her side on the board last week and will be hoping to add more this week. Bond University will be favourites, but the Bluebirds will click into gear soon enough.

Note: Since the preview was run, the game has been postponed due to a ruling from the Gold Coast Council about ground conditions.

It is University of Queensland’s turn to have a crack at Yeronga South Brisbane, with both sides heading into the clash undefeated. It is easy to see why with dynamic forward lines and talent across the board, the teams are capable of notching up the wins. The Devils are averaging a ridiculous 86.5 points per game and only 20 points against to rank first and second in those areas respectively. The University of Queensland are not far behind, with 47 and 23.5 points respectively to sit third overall for both offence and defence. It is only a matter of time before young gun Zimmorlei Farquharson makes her way back up to the elite level, but the X-factor forward has been dominating for Yeronga South Brisbane and is a key player to try and contain. The likes of Lexia Edwards and Emmii-Lee Zanker-Close are also targets to kick to inside 50, while Lucy Bellinger and Madison Goodwin are others who continually put out impressive performances for the reigning premiers. Grace Brennan has been the key goalkicker for the Red Lionesses, slotting five goals in her first two games, while Lucinda Benjamin, Stephanie O’Brien and the red-hot Madi Crowley-Long – who has been named in the best in both matches – have also kicked multiple goals this season. Yeronga South Brisbane are favourites, but the Red Lionesses will be hoping the home ground advantage can come into effect.

In the final game of the round, two sides searching for their first win in season 2021 will face off, as Coorparoo hosts Maroochydore at Giffin Park. The Roos sit in fifth with an average of 26 points for and 39.5 points against, whilst the Kings are 27.5 points for and 43 points against just behind in sixth. Maroochydore went down to Bond University by 19 points, and University of Queensland by eight points in competitive efforts, while Coorparoo have lost to Aspley (26 points) and Bond University (five points) in differing performance. Maroochydore will head into the game with Brooke Matheson leading the goalkicking with two majors, whilst ruck Jacqueline Dupuy has been named amongst the best in both games and hit the scoreboard. Ex Calder Cannons talent Makeisha Muller has slotted a goal but can play up either end, whilst Chloe Gregory and Jya Epstein form a formidable inside midfield for the Roos. Coorparoo’s Renee Teys has made a strong start to the 2021 season, named in the best twice, while Emma McKenzie and Jessica McLean have both slotted the two goals thus far. With a lot of changes in Round 2, the Kings will be eyeing off some continuity in Round 3, with a mix of experience and youth, as Chelsea Winn and Jenae Govan showed last week by hitting the scoreboard in critical moments.