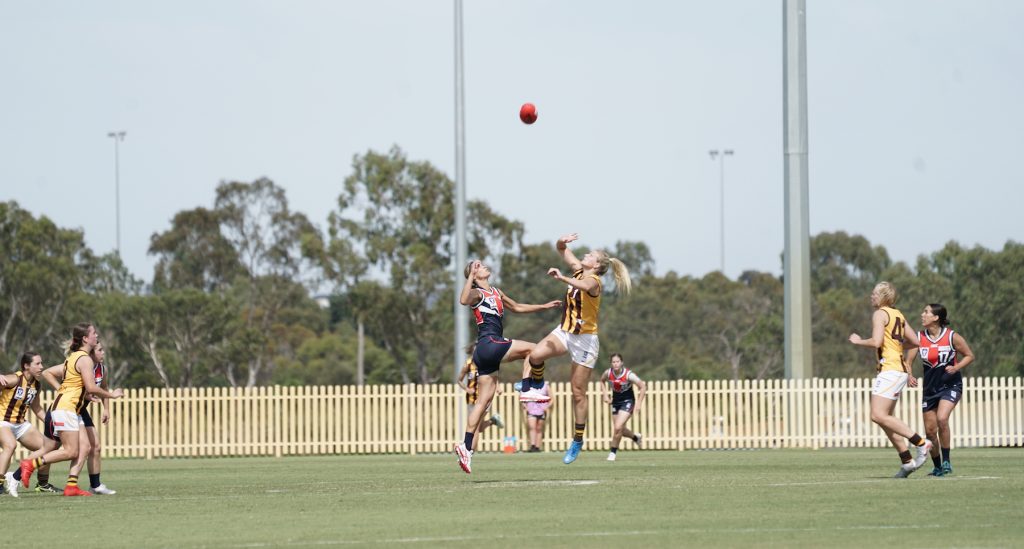 THE 2021 Victorian Football League (VFL) Women’s season rolls on into Round 3 this weekend, starting tonight as the Western Bulldogs host Collingwood in a Friday night showcase. Elsewhere, traditional rivals Port Melbourne and Williamstown face off in a historic fixture, while Carlton and Darebin will battle in a clash of the winless sides. We take you through all the key players and factors across each game in our weekend preview.

Round 3 gets underway on Friday night as the Western Bulldogs host Collingwood under the Whitten Oval lights, with the visitors keen to remain unbeaten. A 2-0 start for the Magpies, who remain reigning premiers, has sent a statement to the competition, while the Bulldogs have seen both sides of the coin in 2021 at 1-1.

AFLW talent continues to flow through the grade, as both sides look set to welcome elite level players this week. The Bulldogs will field Bailey Hunt among its three changes, but see hot starter Britney Gutknecht and Nell Morris-Dalton come out of the team. Young pups have serviced the red, white and blue well, though vice-captain Katelyn Betts looms as a big out.

Sarah Rowe is Collingwood’s most significant inclusion as she returns to action, with the Irishwoman named in her usual half-forward post. On the other hand, fellow senior-listed Magpie Maddie Shevlin comes out of the side having impressed in the two games thus far. Collingwood’s forwardline should make for exciting viewing, with Rowe joined by Imogen Barnett and Matilda Zander inside 50.

Essendon vs. Hawthorn
Saturday March 13, 11:00am
The Hangar

Two Round 2 victors with some momentum behind them in Essendon and Hawthorn do battle at The Hangar, kick-starting a string of five Saturday fixtures. Both sides are standalone entities and got on the board last week after opening round losses, making this clash between traditional rivals an intriguing one based on form alone.

Essendon looks poised to make three changes, with Simone Nalder coming in for her first game in the ruck, while Elizabeth Hosking returns to her half-forward spot in the famous sash. Bendigo Pioneers product Elizabeth Snell has also been named, a reward for her promising NAB League form so far in 2021.

The magnets are also shuffling at Hawthorn, as the brown and gold side prepares to make four changes. A trio of Eastern Ranges prospects exit after debuting in Round 2, with the likes of Dominique Carbone and Alexandra Cuss set to make their returns to the starting lineup. This could prove to be one of the closest games of the weekend.

Two sides sitting on 1-1 records will look to break into the black as Casey Demons and North Melbourne lock horns at Casey Fields on Saturday afternoon. The Demons were mighty impressive in Round 1 but suffered their first loss last week, while North’s form has proven the opposite thus far as the Roos picked up their first win last time out.

Melbourne-listed tall Meg Downie looks set to return to action as she comes into the Casey lineup, joining fellow AFLW squad member Chantel Emonson in the side. The latter is poised to replace first year player Megan Fitzsimon, who has put her hand up for a senior recall in recent weeks.

North has been dealt an injury blow with last week’s three-goal hero Alice O’Loughlin set to miss, along with some key talent in the form of Brooke Brown, Alexia Hamilton, and Jayde Hamilton. The Roos still have some in-form talent to lean on, but may find the going tough against a Casey side which will be eager to bounce back quickly.

Geelong will hold yet another home game this weekend, set to welcome the Southern Saints to Deakin University on Saturday afternoon. Both sides currently hold 1-1 records but found differing fortunes last time out; with the Cats picking up their first win in 2021 while the Saints went down in somewhat of an upset loss.

The hosts will again ring about the changes, with young talent coming in and out of the side. Georgia Clarke is a key out as she looks to be rewarded for promising form, while senior-listed midfielder Laura Gardiner falls back down to VFLW level this week. Geelong Falcons products Annie Lee and Renee Tierney will line up at opposite end of the ground, having staked their claims at NAB League level.

Southern Saints will have a raft of changes as well, with at least five impacting last week’s lineup. Senior-listed youngsters Alice Burke and Renee Saulitis are out alongside the injured Rebecca Ott, though Claudia Whitfort and Jess Matin are among the seven names included this time around. Whichever side can settle quicker will set themselves up for a positive outing.

Traditional rivals Port Melbourne and Williamstown go to battle in a historic clash on Saturday afternoon, which marks their first ever VFL Women’s meeting. The Borough has proven a competition benchmark in its inaugural season, picking up two wins before its highly anticipated homecoming. Williamstown did just enough to win in Round 1, but comes in off a heavy loss last week.

A rotation of Richmond-listed players could prove significant for Port, with impressive youngsters Sarah Sansonetti and Laura McClelland major exclusions given their recent form. Phoebe Monahan is a big name set to come the other way though, along with versatile tall Cleo Saxon-Jones, who will suit up for her first game in 2021. Meanwhile, Williamstown will make two changes among what seems a settled side.

A battle of the competition’s two winless teams in Carlton and Darebin is set to go down on Saturday afternoon, as the Blues return home to Princes Park. Things have not been easy for either side, with the hosts suffering dual losses and struggling in transition, while the Falcons have been competitive in patches without the end result to show for it.

For the second week running, Carlton will be boosted by some returning senior-listed talent, headed by the speedy Brooke Walker. She slots in on the bench, while Winnie Laing is back after a week away and Brooke Vernon is a handy inclusion to the defence. Courtney Jones is another to watch after her promising preseason performances, named at half-forward. Darebin is also set to make at least three changes, as it searches for the winning formula.