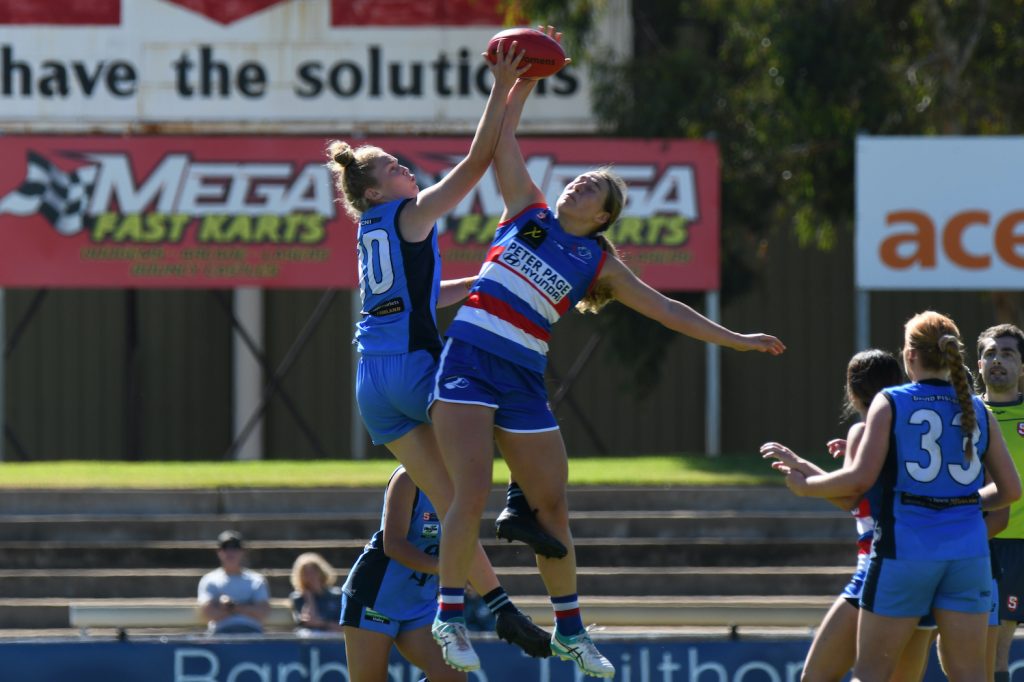 WEST Adelaide and North Adelaide will battle for the right to the top of the ladder after three South Australian National Football League (SANFL) Women’s rounds when they play on Sunday, while the likes of South Adelaide and Woodville-West Torrens are searching for their first win of the season.

Opening the round is a massive crunch game this early in the season between two sides that have the capacity to push for a finals spot. Central District sit at an even 1-1 from its two games thus far, picking up a big win over Woodville-West Torrens, then let the match against Sturt slip away in the final term. They were a quarter away from heading into this game undefeated, but the Panthers are now in a similar boat with an 0-2 start, albeit coming up against two likely finalists this year in North Adelaide and Norwood. Team selection has hurt the Bulldogs with Lauren Breguet and Lauren Smith both out due to concussion, but some of the ins add serious quality to the team, with Amber James, Gemma Doughty and Alicia Butler among those named back in the side and have he potential to put in strong performances. The Panthers have welcomed back Czenya Cavouras to the mix who was sorely missed in Round 2, and along with Alannah Rochow, the Panthers have an extended bench and only the two confirmed outs with Georgia Pennifold and Tiffany Copley both out of the side.

The Bulldogs took it up to the Panthers last season but could not capitalise on a plethora of inside 50s, and now with extra experience through that midfield, the likes of Butler, Caitlen Teague and Shelby Smith have the opportunity to match up against Cavouras, Nicole Campbell and Tahlita Buethke. Montana McKinnon has been in scintillating form at state level and will be difficult to contain, though with a solid backline that has restricted its opposition this year, the Bulldogs will back themselves in. Shannon Murphy, Doughty and Demi Sonneman make up a reliable half-back line, whilst youngsters at either end in Laitiah Huynh and Madison Lane add some extra tenacity in there. Speaking of youngsters, Gypsy Schirmer has been in terrific form to start the year, with Sarah Wright getting better by the week, and Lauren Clifton teaming up well with Jaslynne Smith in defence. Madison Bennett made a great return to the Panthers side in Round 2, and she just locks onto opposition players with her pressure and burst speed.

This is genuinely a 50/50 game. History says South Adelaide, but potential suggest Central District could cause a boilover, though the Panthers will be keen not to drop to 0-3 in a short season.

Two sides that reversed Round 1 losses into Round 2 wins, Norwood hosts Sturt in a game that promises to provide plenty of great matchups. The Redlegs took down South Adelaide last week after a lost to West Adelaide the week before, while Sturt came good in the final term to run over the top of Central District after a forgettable Round 1 loss to Glenelg. A couple of youngsters will be out of the Redlegs side, with Alana Lishmund missing due to suspension, while Tesharna Maher is out with an ankle injury. In comes Jiarna Zerella and Charlotte Nenke, both named on the bench for the clash. Sturt have made minimal changes with only a couple of inclusions to the side as Georgia Hamilton and Allani Dawes join an extended Double Blues bench.

The Redlegs have plenty of firepower up forward, with Jade Halfpenny standing out in attack, while Mattea Breed roamed just about everywhere and even chopped out in the ruck. Speaking of the ruck, Leah Cutting will bring plenty of experience, but will need to try and contain the athleticism and talent of Zoe Prowse who never misses a beat. The draft-eligible AFL Women’s Academy member will make life difficult for not only Cutting, but the opposition midfield as well with her second efforts. Jess Macolino and Sophie Armitstead have nous to extract the ball, with Shai Hiscock and teenager Sarah Branford also named in there. Sharing the load up forward, Isabel Martin can roam up to a wing, while Kate Fenton, Alison Ferrall and Elizabeth Drake are capable of multiple goals. For the Double Blues, their defence is one of the best in the competition, led by Maya Rigter in her new defensive role, and teenage duo, Alex Ballard and Hannah Prenzler. Through midfield, the Double Blues have the youngest onball division in the competition, with 19-year-old Isobel Kuiper the oldest of the quartet featuring Prowse, Alisha Gepp and Tiah Hough who have all stood up against more experienced opposition.

Norwood are favourites to win back-to-back matches, but Sturt just grind out games and then stand up at critical moments, so the Redlegs will need to be at their best to get the job done.

Kicking off the Saturday double-header at Hisense Stadium, the Woodville-West Torrens Eagles are searching for their first win against a Glenelg side coming off a narrow loss to reigning premiers, North Adelaide. The Eagles have lost to Central District and West Adelaide in the opening two rounds, while Glenelg triumphed over Sturt before going down to the Roosters by five points last weekend. The Bays will be without key player Sam Franson for the clash, while Anja Bancevic is also out, as Ellen Fauser and Lauren Bungey return to the team. Fauser has been named straight at full-forward with Bungey at half-back, adding some fresh faces to either end. The Eagles on the other hand have brought in five players and lost three, with Kiana Lee returning to the side to sure up defence. Jess Sedunary is a massive inclusion with the AFL Women’s talent coming back for her first game since her broken leg last year.

The Eagles have a number of young talents who provide great run and carry, with Charlotte Dolan and Jamie Parish named on respective wins, and Shineah Goody at half-back. The experience of Jovanka Zecevic and Renee Forth in midfield will look to take control, though youngster Piper Window has held her own in the competition, and Ellie Kellock is a reliable inside midfielder. Brooke Tonon and Madisyn Freeman will provide the Bays with run of their own, while Tessa Kohn and Tamsyn Morriss are still young and provide some hardness around the ground. Jessica Bates is in some great form for the visitors, while Amie Blanden is a consistent source of scoring chances inside 50, and Anastasia Falkenberg capable of roaming up the ground when required.

Glenelg have the extra experience, though the Eagles’ inclusions are mighty handy so will make it a tough contest.

The SANFL Women’s fixture has saved the best until last this week, with a top-of-the-table clash between two undefeated sides in West Adelaide and North Adelaide. The preliminary finalists from last year have defeated Norwood and Woodville-West Torrens in the opening two rounds of the season, whilst reigning premiers North Adelaide defeated South Adelaide and Glenelg to also enter this contest at 2-0. Unfortunately for the Bloods, they have lost some serious experience with Chelsea Biddell bouncing straight back up to Adelaide’s AFL Women’s side, Madison Newman injured and Melanie Elsegood and Louella McCarthy also out. The quartet booted five of the Westies seven goals last week, so coach Mark Moody will need to shuffle the magnets. Into the side come the likes of Samantha Ramm, and Nicole Hooper to take over the key position roles of Biddell and Elsegood, while six other players have been added to an extended bench. For North, they have added two players to the side with Chloe Short in line to make her debut, and Olivia Gallio named in the team for the first time since the 2020 SANFL Women’s Grand Final.

The Bloods defence has been steady this season with the inclusion of Sharnie Whiting at centre half-back, she has provide the strong intercept marking ability, with 15-year-old young gun Lauren Young also providing support by dropping back there and earning a Breakthrough Player of the Week nomination in Round 1. West Adelaide have an abundance of youth, and it showed when hard nut Zoe Venning attacked the contest last week and came away with her nomination for Round 2 after a dazzling 25-disposal performance. With Keeley Kustermann another one with high-end potential, West Adelaide have no shortage of talent running around. The Roosters have a Rising Star of their own in Hannah Ewings who won the Breakthrough Player Award in 2020 after also earning a nomination in debut. She teams up well in midfield with another young talent in Jaimi Tabb, as well as the experience of Leah Tynan and Lauren Daniel. The Roosters are able to roll players in different positions around the field, with Brianna Arthur able to play forward or midfield, Kate Case in defence or midfield, and Julia Clark pushing further up the ground from her traditional deep defence role. Zoe Greer and Venning will be looking for feeds from Kate Walsh in midfield, and hoping to create some scoring opportunities up front. It will be difficult with the two rocks in defence in Kristi Harvey and Talia Radan who have proven near impenetrable at times.

The reigning premiers look stronger on paper with the two AFL Women’s talents and experienced players out for the Bloods, so it will be up to the youth of West Adelaide to step up and match it with the Roosters who have so much versatility there are plenty of backup plans if the magnets need to be shuffled on gameday.