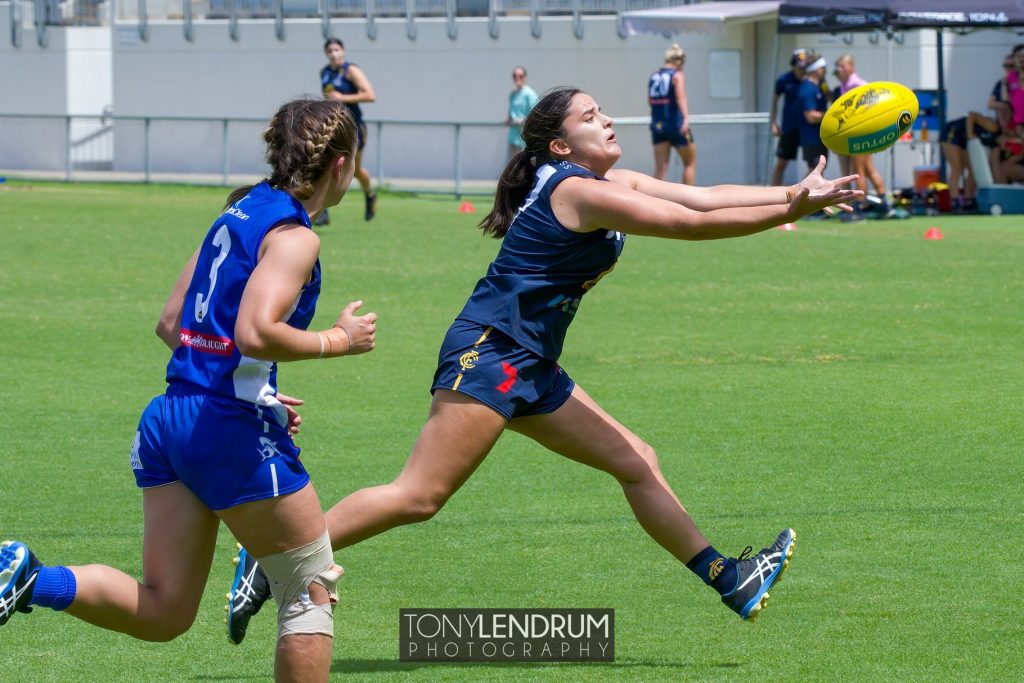 IN our Top Performers for the West Australian Football League (WAFL) Women’s competition, we took a look at the two streamed games between Claremont and South Fremantle, and East Fremantle and Subiaco and noted down some of the youth who stood out.

Had a huge final term after being solid without being outstanding throughout the match, and her best play came in the last term where she grabbed the ball with one hand at full speed, sidestepped an opponent and drilled a low bullet into a target in the middle of the ground. Her technique by foot is superb and her decision making is also impressive. She showed good strength throughout the match and took a great intercept mark late in the second term.

Had her moments but being inside 50 had a tough time for the Lions. Led hard but unfortunately her one set shot on goal did not connect well and skewed along the ground, then in the final term could not get boot to ball inside 50. She continued to apply good defensive pressure and had no problems tackling bigger opponents.

Another player who covered the ground well, taking a strong mark at half-back in the second term and kicking long to the wing, then later on was inAll Postsside 50 to kick the Bulldogs’ first goal of the game with some moves. She turned one way and then the other to snap it around her body through for a goal.

Unfortunately came off sore in the third term but used her body well in ruck stoppages, and the 16-year-old showed off her athleticism in the third quarter when she out-marked Amy Franklin at centre half-forward, then grabbed the ball out of the ruck against Franklin and snapped it forward.

Used the ball well in the first term with a lovely kick to the top of 50m with 90 seconds left, and then showed fierce tackling pressure at different stages throughout the game. Not a huge ball winner, and did rush a kick late in the game, but buzzes around the stoppages and covers ground well.

Played her most productive game of 2021, looking dangerous as ever up forward in the first half, and adding the two goals. Not only did she convert the two set shots in the first term, but she set up another major, and then had a fresh airey in the goalsquare where she could have finished the term with three majors. She hooked a shot on goal in the second term, then was shifted into defence in the second half where she provided a number of rebounding plays and strong grabs, such as a one-on-one late in the match, reading the ball well in flight.

The 16-year-old defender is a readymade League player with great strength and a powerful kick. She won a couple of 50m penalties in the game, including one in the final term with 90 seconds remaining where she looked to play on but was dragged down and awarded the free kick. She kicked the major to cap off a strong performance, and her intercept marking and kicking was solid throughout the match.

An almost-game from the Sharks talent who kicked three behinds from close range. While her composure could improve given she has more time than she thinks at different points, once she is able to connect cleanly she could be a real damaging forward prospect. She also had some real bad luck with the ball bounce, such as one taking a right angle turn away from goal when it looked on target, then another which she hit the post from less than 10 metres out. Kept presenting and pushing up to half-forward though.

At 15-years-old, Raison is projecting a promising player with good upside. She wins the ball in close and is quick to distribute it. She uses it well in time and space, and whilst sometimes she can rush her disposal, she will always give it a crack with a strong second effort. Her kick in board from the forward side of the wing to nail a target on a 45-degree kick showed just what she is capable of, and will be one to watch over the next few seasons.

Played forward this game again and had a few chances but could not get herself on the scoreboard. Usually a good kick, made a couple of mistakes, but kept running hard, and used her footy smarts to play on from a free kick to advantage and handball to the free Maddy Ross in the goalsquare for a crucial major in the second term. Still attacks the contest with vigour and is not afraid to get her hands dirty.

Coming from a rugby background, Tuhakaraina has some seriously eye-catching athletic traits. Combining her speed and power, Tuhakaraina bursts through stoppages and everyone needs to step out of the way. She has elite speed and she used it to hit up Zoe Huggett in front of goal in the second term. Won a free kick in front 20m out but her technique needed work with the shot pushed to the left. Nonetheless, definitely some exciting potential in her game.

Has that X-factor about her, being clean at ground level and able to create goal-scoring opportunities. She had a quick shot towards goal in the first term but it bounced up and went to the left, then continued to remain involved throughout the contest with an ability to quickly dish off the ball to teammates whilst she was under pressure.

The 19-year-old caught the eye having crossed from Bond University and makes her presence felt around the stoppages. She had a quick dribble kick towards goal in the second term that just went to the right, but her work with laying tackles and winning free kicks was impressive. She even took a fantastic diving mark in the final term and kicked inboard looking to switch play.