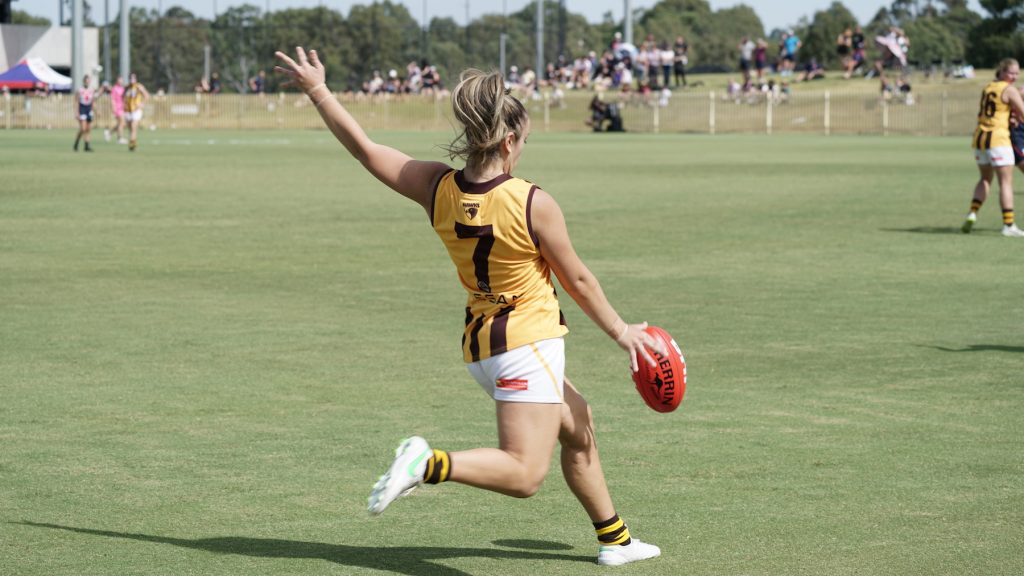 A HEAP of young prospects are set to filter through the Victorian Football League (VFL) Women’s competition in 2021, with the revamped structure allowing Under 18 and 19 NAB League players to align with state league sides as both seasons run concurrently. Round 2 saw plenty of talent scattered across each side, and we take a look at how VFLW-listed players who currently play in or have graduated from the NAB League, performed.

Geelong picked up its first points for season 2021 on Saturday afternoon, defeating standalone side Williamstown by 40 points. The Cats had some AFLW-listed talent to come from the NAB League, as well as Geelong Falcons graduate Paige Sheppard. The midfield-forward earned votes for the second week running in what has been a promising start to her year.

Williamstown blooded a Falcons product of its own in the form of Zoe Garth, who has played three NAB League games this year. Tahlia Merrett came into the team and was among the Seagulls’ best, while Megan Williamson and Ruby Tripodi also played roles for the losing side.

Promising Eastern Ranges midfielder Olivia Meagher was given an opportunity for Collingwood after her dominant Under 19s form, as the Magpies defeated Southern Saints by 22 points. Meanwhile, former Northern Knights tall Neve O’Connor played her second game running in the black and white as she continues her development.

Gabby De Angelis backed up from a goal in last week’s outing to be among the Southern Saints’ best players on the day, though she did not hit the scoreboard this time out. Versatile former Oakleigh tall Amelia Peck was again among the Saints’ lineup, as was Grace Hodder who started at half-back.

Essendon’s winning lineup featured a bunch of fairly recent NAB League talent, including a trio of ex-Calder Cannons. Among them, Alana Barba and Felicity Theodore each snared a goal in the win over Casey, with Grace Dicker rounding out the trio in her maiden appearance. Murray product Eloise Ashley-Cooper also suited up for her second game, as did Bridie Winbanks for Casey.

A promising young Western Bulldogs side fell short of North Melbourne on Sunday morning, as the Kangaroos earned their first points in 2021. Former Richmond player and Northern Knights graduate Ciara Fitzgerald ran out for her first game in blue and white, kicking a goal on debut. Western prospect Marli Klaumanns-Moller was also fielded as she continues to link with the state league side.

For the Bulldogs, a strong contingent of AFLW-listed NAB League products made their mark, while a few budding stars also contributed. Among them, 2020 Bendigo Pioneers skipper Brooke Hards battled away up forward, while Molly Denahy Moloney and Western’s Nikita Wright again donned the red, white and blue in Round 2.

Hawthorn was another team to win for the first time in 2021, and had some strong young talent on show. Lauren Szigeti was among the Hawks’ best rotating through midfield from defence, as she and Jemma Owen both snagged goals. Maddi Shaw returned to the lineup, while Chloe O’Malley played her second game, and Eastern products Isabelle Khoury, Tilly Hardy and Jess Grace all earned VFLW berths among a raft of changes.

Former Murray forward Sophie Locke lit up the attacking half for Port Melbourne with three goals as the Borough thumped Carlton on Sunday afternoon. Ex-Carlton AFLW utility Bridie Kennedy had her first outing for the standalone side, while Kate Adams featured once again after her promising start for Port in Round 1.

Marnie Jarvis was a late inclusion for Carlton and was among a few players to show glimpses in the loss. Meanwhile, Amber Micallef again ran through midfield for the Blues, as Teagan Brett and Taylah Kolevski rounded out the former NAB League players to feature in Round 2.