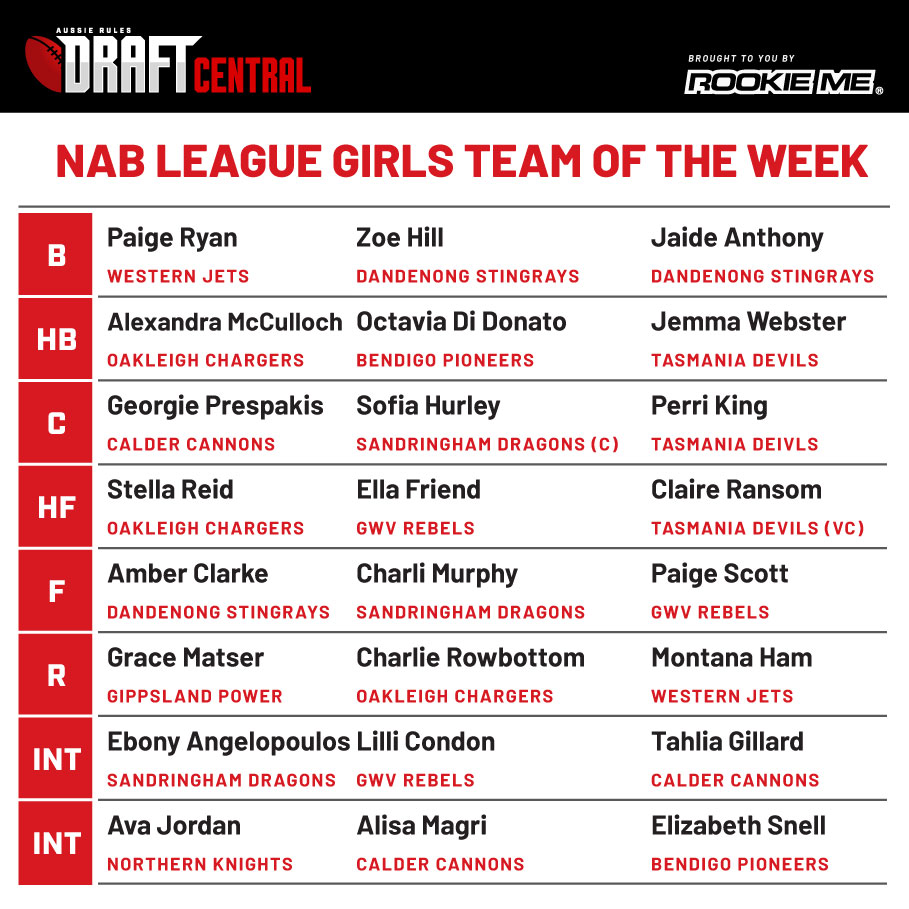 DUE to the ever-changing fixture and spread out nature of Round 2 in the NAB League Girls, this week’s Draft Central Team of the Week covers the three Round 5 matches, as well as the three completed Round 2 matches, Calder Cannons vs. Northern Knights, Tasmania Devils vs. Western Jets and Bendigo Pioneers vs. GWV Rebels. With some players playing two games and other teams not playing any, it made for a challenging week to select 24 players in the Team of the Week. In particular, the midfield squeeze was really felt, with so many quality performances seeing a couple slide into half-forward.

Six of the 10 teams that took to the field in the completed matches received three players apiece in our Team of the Week, with winners Calder Cannons, Greater Western Victoria (GWV) Rebels, Oakleigh Chargers, Sandringham Dragons and Tasmania Devils all having a trio of players in there. Narrow losers Dandenong Stingrays had three players as well, while other losing sides Bendigo Pioneers and Western Jets had two apiece, and Gippsland Power and Northern Knights had the one each.

In the combined Team of the Week, Sandringham Dragons’ Sofia Hurley earned the captaincy following her best on ground performance, and subsequent Draft Central NAB League Girls Player of the Week nomination in her team’s win over Gippsland Power. Hurley is joined in the side by forwards Charli Murphy (five goals) and Ebony Angelopoulos (three), with this week’s front six a pretty formidable outfit. Their opponents Gippsland Power had the sole player in the side with ruck Grace Matser having a day out with her ruck work and around the ground effort.

The only team to grab two wins over the weekend and be the beneficiary of the vice-captain nod was Tasmania Devils, with Claire Ransom handed that honour for her two outstanding performances where she collected nine Draft Central Medal votes in those outings. She will slot into half-forward such is the strength of the midfield, with AFL Women’s Academy member and teammate, Perri King out on a wing. Teammate Jemma Webster makes her debut in the side after a strong performance off half-back for the Devils. Their victory over the Western Jets was despite the efforts of Paige Ryan who knocked up a whopping 13 rebounds in easily a league-high this season, and Montana Ham in midfield was also influential with her stoppage work.

GWV Rebels had the win over Bendigo Pioneers last night, with Paige Scott‘s three goals earning her a place inside 50, with key forward Ella Friend – who also played on the wing – back at centre half-forward. Lilli Condon rounds out the Rebels trio with a spot on the bench after another promising effort from the tenacious midfielder. The Pioneers suffered the two defeats to Tasmania and Western, but had the two players who made the side in Octavia Di Donato (centre half-back as the second tallest player there) and Elizabeth Snell (interchange). Tegan Williams also made the side again though this time as an emergency, alongside Dandenong Stingrays’ Abbey Jordan and Oakleigh Chargers’ Brooke Vickers.

Speaking of Dandenong and Oakleigh, their Friday night thriller yielded 25 per cent of the team with three players from each side making it in. Stingrays defenders Zoe Hill and Jaide Anthony were superb on the rebound, wile Amber Clarke almost single-handedly dragged her side over the line with three goals. Oakleigh’s Charlie Rowbottom kicked two clutch goals, while Stella Reid had the ball on a string and could be named anywhere but finds herself at half-forward, and Alexandra McCulloch at half-back. Rounding out the side from the night before was Calder Cannons’ jet Georgie Prespakis on a wing, along with teammates, Tahlia Gillard and Alisa Magri who both made the bench, and Northern Knights’ Ava Jordan who is an exciting prospect for a couple of years time.

DRAFT CENTRAL TEAM OF THE WEEK: ROUND 2A / ROUND 5