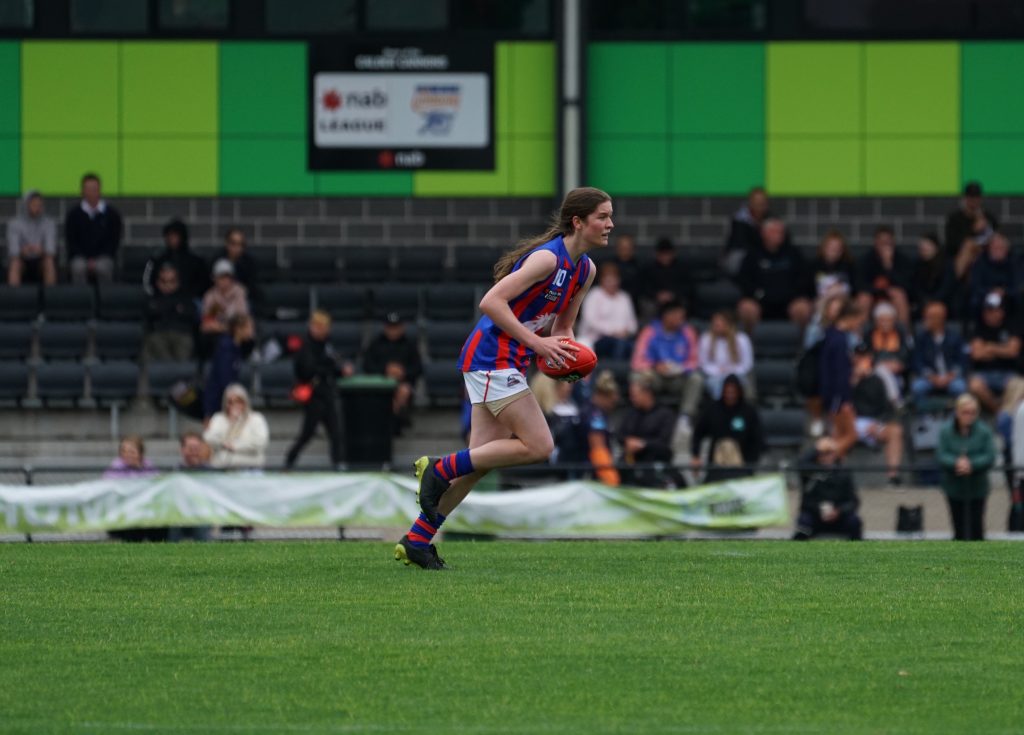 THE flexible NAB League Girls fixture has meant a number of midweek games take place, so in this article we wrap up last night’s contest which saw the Greater Western Victoria (GWV) Rebels defeat Bendigo Pioneers at Epsom Huntly Reserve, as well as preview the big clash between Sandringham Dragons and Oakleigh Chargers at RSEA Park.

The GWV Rebels moved to 2-2 for the 2021 NAB League Girls season, bouncing back from a heavy loss against the Dandenong Stingrays to post a big win of their own. In a rescheduled Wednesday night fixture between the Rebels and Bendigo Pioneers, the Rebels were just too strong as their big guns fired to win by 57 points. A brave Bendigo outfit – missing the likes of AFL Women’s Academy member Tara Slender and top ball-winner Elizabeth Snell – was competitive at different points, but some missed opportunities in front of goal hurt.

It was all the Rebels early, as they dominated possession and put the defence under siege. The Pioneers back six held up well with Charli Dorrity and Octavia Di Donato among the early ball winners, and Tegan Williams having a stint in the ruck. Paige Scott had the ball on a string throughout the game, but the first quarter she practically brought her own footy, as the Rebels went out to a 20-point lead. That extended to 34 points by the main break, though the Pioneers had picked up and were providing more attacking footy. The third term saw the home team get on the scoreboard through Di Donato who almost had a second major when she was thrown forward, but the Rebels still won the quarter to extend the lead out to 36 points.

Three goals in the final term to the Rebels put an exclamation mark on a wonderful performance, winning 10.8 (68) to 1.5 (11) in a real even effort across the board. Scott finished the match with three majors, while Ella Friend‘s work between half-forward and the wing was a standout. Lilli Condon kept finding the footy in close and Nyakoat Dojiok and Molly Walton were relentless in defence. For the Pioneers, Di Donato was impressive across the four quarters, as Dorrity, Williams, Keeley Fullerton and Jayda Richardson also caught the eye with their performances.

Both teams will get somewhat of a break until Saturday, March 20 when the Pioneers host Dandenong Stingrays at Epsom Huntly Reserve, 12.30pm. The Rebels take to MARS Stadium the day after to lock horns with Oakleigh Chargers from 11.30am.

A blockbuster Thursday night fixture between Sandringham Dragons and Oakleigh Chargers takes place from 6.30pm at RSEA Park Moorabbin in a match anticipated to provide plenty of future talent. The Dragons grabbed their first win of the season with an impressive victory over Gippsland Power at Ronald Reserve on Sunday, and the Chargers withstood their greatest challenge thus far against Dandenong Stingrays to post back-to-back single-digit victories in the 2021 NAB League Girls season.

The Dragons will hope to welcome back inside midfielder Bridie Hipwell for the clash having sustained an ankle injury back in Round 1. Hipwell is a crucial part of the Dragons makeup, particularly as that bigger body on the inside to go head-to-head with Charlie Rowbottom. The latter continued her great form in the Chargers’ victory over the Stingrays, kicking two goals in clutch moments to stand up when it counted. Stella Reid suffered leather poisoning in that match, as she racked up a ridiculous amount of touches and work rate far surpassed anyone else, winning it in all thirds of the ground. She has a chance to go up against the likes of Dragons’ talent Sofia Hurley who had the ball on a string herself against the Power, and earned our Draft Central Player of the Week for Round 5.

Pia Staltari has been a neat user coming off half-back, with Chloe Saultry and Kiana Lynch providing that inside presence. With Keely Coyne, Emma Stuber and Tayla Jones also adding great depth and run to the midfield group, the Dragons have no shortage of developing talent. Even up forward, Charli Murphy slotted five goals last start, and Ebony Angelopoulos managed three, while debutant Mia Zielinski made a promising start with two majors from three scoring shots in the win against the Power. For the Chargers, Eliza James, Amanda Ling and Brooke Vickers have all been crucial players in their respective areas, while Alexandra McCulloch caught the eye under Friday night lights with her best NAB League performance against the Stingrays.

If the defence of the Chargers can hold firm like it did against the Stingrays, then they will be hard to beat, while up front they just find players to kick goals with Ameille Smith and Holly Kenealy both kicking three goals in different games, and Taylah Morton always dangerous close to goal. The Chargers’ forward line is helped out by the rotating midfielders, while the Dragons have some reliable targets to kick to, both in the air and winning it at ground level. The undefeated Chargers will be favourites for this clash, but if Hipwell returns for the Dragons, expect it to be a fierce contest on the inside.