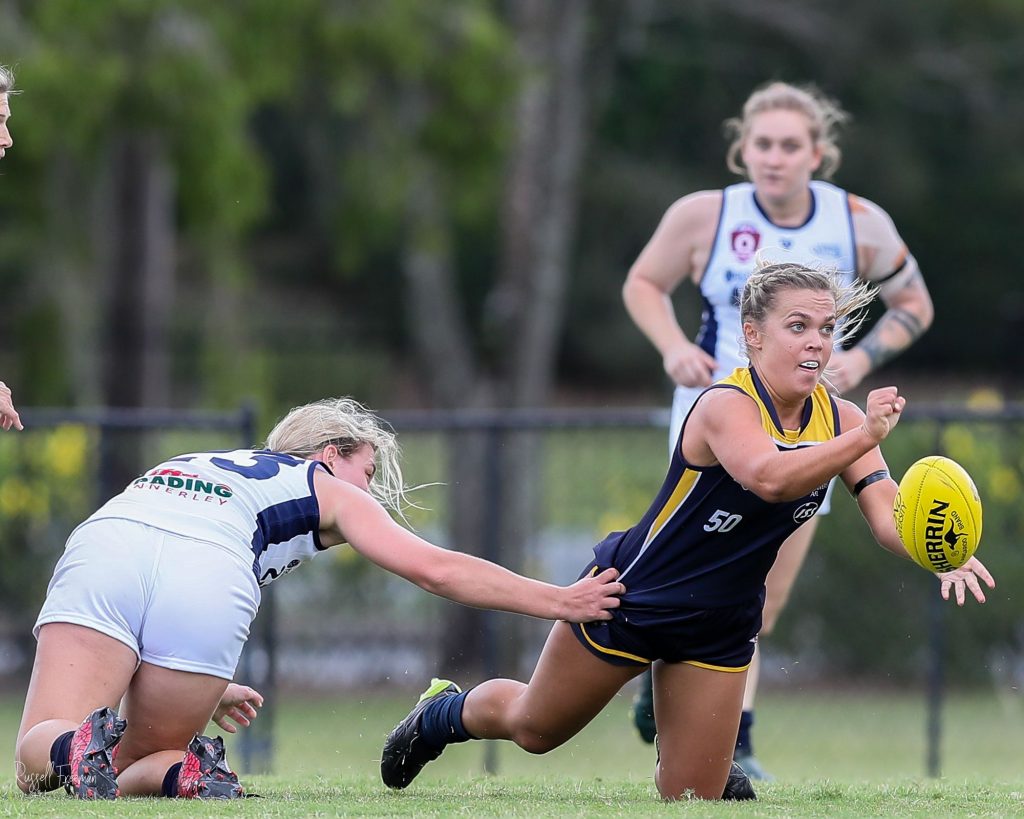 IN a remarkable-looking Queensland Australian Football League (QAFL) Women’s ladder, the top four sides are all 2-0 and the bottom four sides are 0-2 after the Round 1 winners doubled down on victories over the weekend. Reigning premiers Yeronga South Brisbane crushed a second opponent in as many weeks, as Aspley Hornets went back-to-back after being winless in 2020. The 2020 minor premiers Bond University, and big improvers University of Queensland both notched up their second wins of the season to create a divide amongst the top and bottom teams.

Aspley Hornets have been making up for lost time this season, showing Round 1 was far from a fluke, defeating Coolangatta Tweed by 41 points in front of home fans. The Hornets had to bide their time early with the only goal of the first term going the way of Courtney Daniec, before Sarah Madden and Michaela Campbell both slotted second term majors to extend the lead out to 21 points at the half. Campbell and Melissa McPhee had the home team ready to celebrate heading into the last with a comfortable 33-point advantage, before Maggie O’Connell broke the drought for the Bluebirds.

O’Connell’s goal in the first five minutes of the final term gave the home team a slight sniff with the margin just adrift of four goals. However less than a minute later, Chloe White slammed the door shut on any comeback with a Hornets major, and Campbell, with her third major, put an exclamation mark on the victory. Campbell was the key architect up forward for the hornets, with McPhee, Daniec and Morgan Lanigan named among the best for their efforts in the big win. For Coolangatta Tweed, Monique Law and Lily Brancatisano both stood out alongside AFL Women’s talents in Selina Priest and Beth Pinchin.

The side on top of the table is the ultra-impressive Yeronga South Brisbane following the reigning premiers’ dismantling of Wilston Grange to the tune of 76 points. The sides were even in the first term with the Devils ahead by a point, but after quarter time everything clicked into gear for the home team and they stormed to a whopping 16.12 (108) to 5.2 (32) win. Six goals to one in the second term blew the margin out to 39 points, and with four and three goals respectively in the third and fourth terms to one goal apiece for the visitors in that period, it was one-sided traffic and the Devils romped to a huge win.

Yeronga South Brisbane had no shortage of goal-scoring options as exciting teenage forward Zimmorlei Farquharson continues to bang down the door for AFL Women’s selection with two goals and a best on ground performance in the win. Lily Bougoure also slotted two majors and was impressive, whilst forward duo Lexia Edwards and Emmii-Lee Zanker-Close combined for seven majors between them in a dominant effort inside 50. Jordan Zanchetta again impressed at state league level, named amongst the best with Julia Wardle and Clancey Sutton. For the Gorillas, Rheanne Lugg slotted two majors to be the sole multiple goalkicker in the loss, while she was also named in the best with Holly O’Flaherty and Charlotte Taylor.

In the match of the round, Bond University survived a late comeback from Coorparoo to win the game by just five points. The Sharkettes seemed to have the match in control despite the low scoring, booting the only two majors of the first half to lead by 11 points at the main break. Both sides kicked a goal in the third term, but when Chelsea Winn and Jessica McLean got involved in the final term, the Kings remarkably hit the front midway through the final term. With the game looking like it would slip from their grasp, Eloise O’Brien and Gabrielle Deller put through important majors, the last of which handed them back the lead in the last two minutes, where they were able to hold on for a 5.4 (34) to 4.5 (29) victory.

The Sharkettes had five individual goalkickers in the win, with O’Brien, Courtney Sexton and Molly Ritson all kicking majors but also named amongst the best, while Deller and Jess Maher converted goals as well. Georgia Brehmer, Stella Major and Lucinda Pullar were also impressive in Bond University’s victory to move the Sharkettes to 2-0 this season. For the Kings, McLean’s two majors were crucial in getting her side back into it, with Winn and Emma Pittman the other goalkickers. Renee Teys, Megan Evans and Caitlin Renner were among those tried hard despite the narrow loss.

In the other match of the round, University of Queensland became the only team to win on the road, holding off Maroochydore to get up by eight points. The Red Lionesses moved to 2-0 for the season with the 6.1 (37) to 4.5 (29) victory, largely helped by a three goals to one third term that spurred them on to the win. Leading by just five and three points at quarter and half-time respectively, the Red Lionesses kicked 3.0 to 1.0 in the third quarter to gain some breathing space with a 15-point advantage heading into the final term. The Roos kicked the only goal of the final term, but it would only be enough to reduce the final margin into the single digits, going down, 4.5 (29) to 6.1 (37).

Grace Brennan and Stephanie O’Brien slotted two goals apiece for the winners, while Madi Crowley-Long and Lucinda Benjamin also kicked majors. The goalkickers all impressed in the victory, with Mia Teubler and Megan Hunt named the top two Red Lionesses in the match. For the Roos, Brooke Matheson kicked the two goals, while India Madin and Sara-Jane O’Grady also nailed goals. Jacqueline Dupuy, Chloe Gregory and Jya Epstein were the best for the home backing up strong Round 1 performances.

Next week the unbeaten clash between University of Queensland and Yeronga South Brisbane takes centre stage, with other winners. Aspley hosting Wilston Grange, and Bond University clashing with Coolangatta Tweed. Winless sides Coorparoo and Maroochydore do battle in the final game, with at least one team to collect its first points of the year.