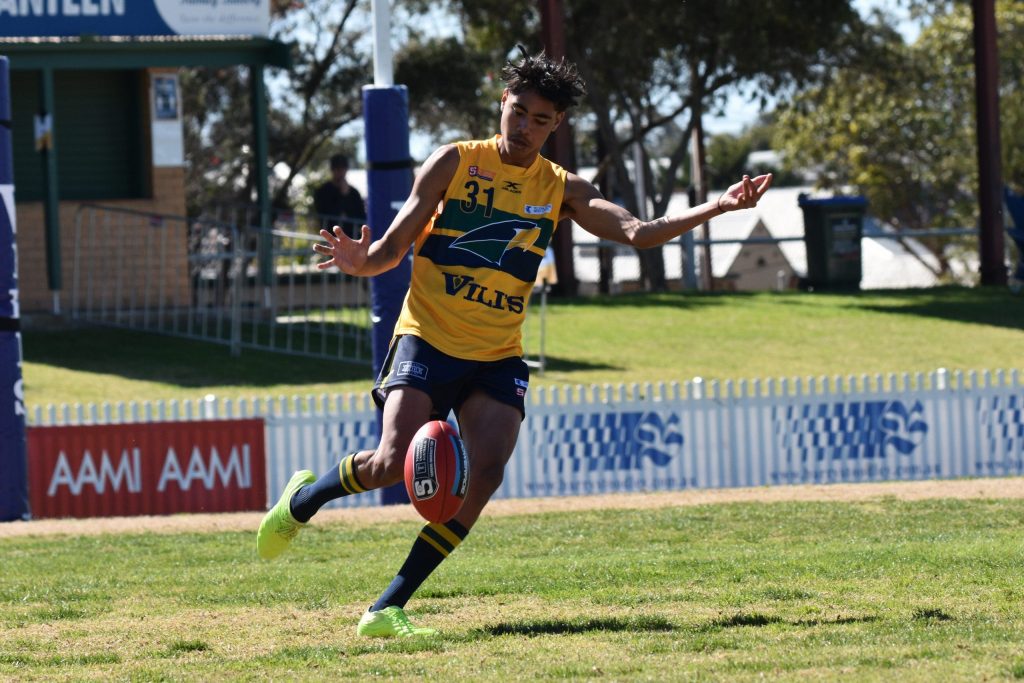 PORT Adelaide fans will again have their eyes on a budding father-son prospect, with Woodville-West Torrens talent Jase Burgoyne (son of Peter) gunning for the big leagues in 2021. The versatile defender-midfielder enjoyed an exceptional bottom-age SANFL Under 18s season last year; proving a consistent, clean, and creative ball winner. He was included in this year’s AFL Academy intake and while his preseason has been interrupted by injury, Burgoyne is poised to climb the grades once fully fit.

Q: You didn’t test today, what kind of niggle are you carrying?

A: “Last year in preseason I tore my meniscus. I trained with it for about two weeks but it was just nagging me and was pretty sore so I told the physios and they sent me in for an MRI. Turns out it was torn so I got surgery on the 23rd (of December) two days before Christmas, then I’ve been doing rehab ever since – just bike and upper body work.”

Can you tell us a bit about your footballing journey so far?

“I started off at Port Districts from about Under 8s and played there all the way up until I think Under 15s or 16s, then I moved over to SMOSH West Lakes for a year. In Under 13s I was in the Port Adelaide development squad for a year before they cancelled that stuff and then I went to Eagles from there and have been here ever since.”

What are your goals for the upcoming season?

“For my individual goals, I just want to be consistent, build on my draft stock and hopefully go as high as I can in the draft. Also, to play League, that’s my biggest goal so far and obviously to play Ressies too. But my biggest goal is League, I want to play with the big boys and see how I go there.”

How would you describe yourself as a player?

“I see myself as an attacking half-backman; rebounding, attacking, I like to set up the play like a playmaker. Just make good ball use off the backline to set play up and then also go into the midfield, get clearances and find the ball.”

Are your skills your greatest asset?

“Yeah, I think my ball use is pretty good. Clean hands too.”

Is there anyone you can compare yourself to in the AFL?

“Lachie Whitfield. He can play off the backline, or the wing, up forward, and maybe a little bit in the midfield. He’s definitely my biggest person I look up to, just with the similarities in body type and gamestyle.”

How have your father Peter and brother Trent helped you along your journey?

“Ever since I was pretty young, dad’s always been there with my footy journey. Before every game I’d talk to him on the phone, after every game giving me feedback which can be constructive too – it’s not always good, it’s not always bad. They want to help me get better so before a game, he sits me down and tells me what I need to do to hopefully have a good game, get the team the win and after the game he’s always talking to me about what I did good, what I did bad, and what I can improve on, all that stuff.”

Does the link add some pressure in your draft year?

“I guess so, obviously I’ve got the last name Burgoyne and I can’t really help that. But I don’t try and think of that too much, I just go out there and try to do the best I can. I’m happy with how I’m going at the moment, I guess there is pressure there because Trent is also at Port at the moment but I try to just play my best footy.”

How do you balance your commitments between school and footy?

“When I do have some spare time on my hands, I just go hang out with my mates and chill a bit. With schoolwork, I just try to stay up to date and make sure that I’m at training on time and don’t fall behind or anything.”

How would you describe yourself as a person off the field?

“Pretty chilled and relaxed. I don’t really like to go out, I like to stay home instead – I’m a bit of an introvert but like to make my mates laugh too.”