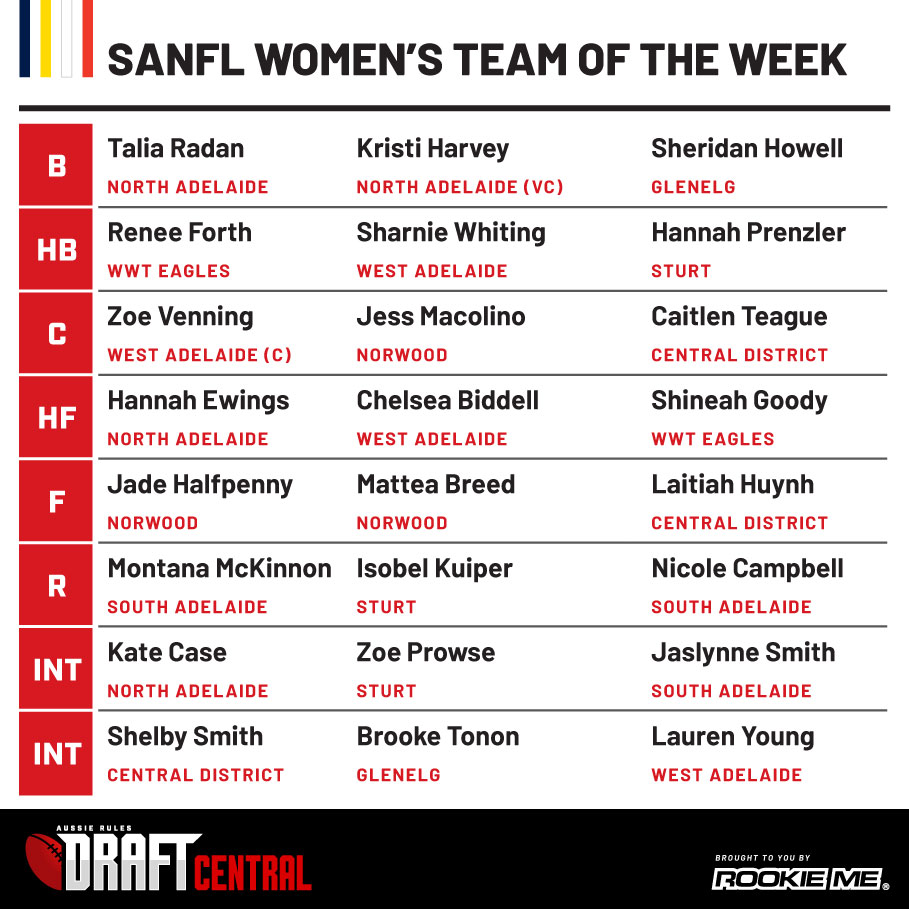 UNDEFEATED sides, North Adelaide and West Adelaide have topped this week’s Draft Central South Australian National Football League (SANFL) Women’s Team of the Week with four representatives apiece in the 24-player squad. North Adelaide’s quartet features three players who made it the week before, while West have a couple of fresh faces rejoining back-to-back nominees.

West Adelaide youngster Zoe Venning captains the team this week after an outstanding performance with 25 disposals, two marks, five tackles, four inside 50s, two rebounds and one goal. She is joined by tall target Chelsea Biddell, as well as back-to-back nominees, Sharnie Whiting and last week’s captain, Lauren Young in the side.

North Adelaide’s Kristi Harvey locks down full-back once again and has been handed the vice-captaincy for her performance which was highlighted by 14 disposals and seven rebounds. Partner-in-crime Talia Radan is in the back pocket next to her, whilst young gun Hannah Ewings, and draft-eligible talent Kate Case are also in the side.

Norwood’s win over South Adelaide saw the Redlegs receive three nominations in the side, with consistent midfielder Jess Macolino named in the centre of the ground. Forward Jade Halfpenny and tall utility Mattea Breed are the others to earn places in the team this week. Their opponents South Adelaide also had three players nominated, with ruck Montana McKinnon staking her case for an AFL Women’s recall, as Nicole Campbell and Jaslynne Smith both made the side too. South’s Lauren Clifton was close to making the side and was named as an emergency this week.

Sturt’s first win of the season meant three teenagers worked their way into the side, with top-age talents, Hannah Prenzler and Isobel Kuiper both in the starting team at half-back and onball respectively, while ruck Zoe Prowse will provide backup to McKinnon. Their opponents Central District also recorded three players in the side, with tenacious forward Laitiah Huynh making the team for a second consecutive week, this time joined by midfielders, Caitlen Teague (wing) and Shelby Smith (interchange). Katelyn Rosenzweig was named as one of three emergencies in the team.

The two sides which recorded just the two players in the team had an even spread across the board and made it difficult to pick best players. For Glenelg, defender Sheridan Howell, and midfielder Brooke Tonon were the final inclusions, with Piper Window named as an emergency. Woodville-West Torrens Eagles had two players at different ends of the experience scale, with Adelaide AFL Women’s player Renee Forth, and Under 16s talent, Shineah Goody slotting onto flanks at opposite ends of the field.

DRAFT CENTRAL SANFL WOMEN’S TEAM OF THE WEEK: ROUND 2