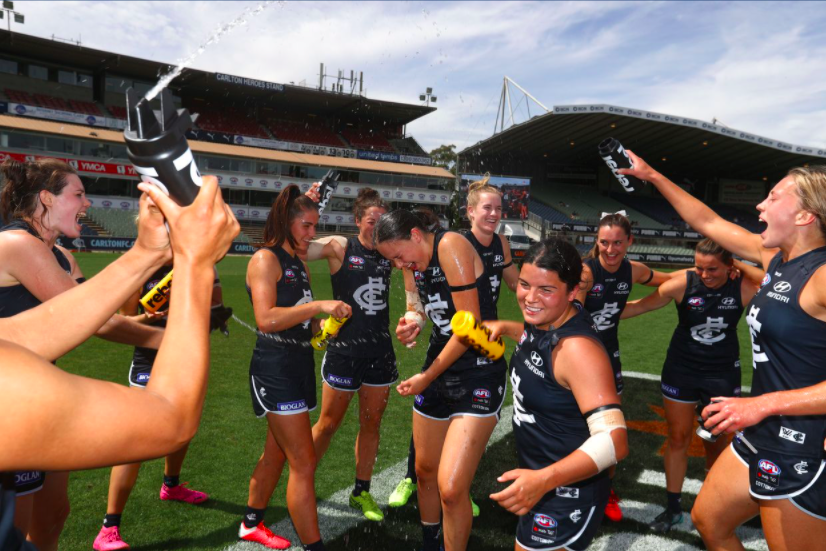 CARLTON made an emphatic return to the winners list on Sunday, feasting on a winless Geelong side to salute by 33 points at Princes Park. The Blues were in a scoring mood and proved efficient in front of goal, leading at every break and notching their highest total of the season to run out 10.4 (64) to 4.7 (31) victors. The win also sees Carlton keep touch with the top six.

Geelong booted the first goal of the game through Rebecca Webster, but a quick Darcy Vescio double from deep ensured the Blues would claim the lead and never look back. Along with Vescio, Georgia Gee and Serena Gibbs also finished with two goals as the trio accounted for over half of their side’s score.

Reigning league best and fairest Madison Prespakis shook off an early injury concern to lead all comers on the day, finishing with 28 disposals and a goal on her return from suspension. Both sides have some lingering injury issues coming out of the game though, with Carlton’s Mimi Hill (knee) and Geelong’s Millie Brown (hamstring) having their outings cut short.

Prespakis and Vescio were among Carlton’s best, while skipper Kerryn Harrington proved adventurous from half-back and Grace Egan continued her fine form through midfield. Both collected over 20 disposals. Webster proved Geelong’s best afield with 1.2 from her 22 touches, as Amy and Meghan McDonald again played important roles, and Phoebe McWilliams looked lively for her three minor scores.

Both sides face a seven-day turnaround as they again prepare for games on Sunday, with the Blues again hosting at Princes Park as Fremantle rolls into town, while Geelong travels to take on the West Coast Eagles at Mineral Resources Park.

COLLINGWOOD kept its perfect record intact and snapped the Western Bulldogs’ win streak in one fell swoop on Sunday, defeating the Dogs by 36 points at Victoria Park. Having only managed seven behinds in the first half, the Pies sunk as many goals thereafter to remain top of the tree with a comprehensive 7.9 (51) to 2.3 (15) triumph.

Young pup Elizabeth Georgostathis booted the sole major in a one-goal first half, before the contest began to open up and Collingwood soared ahead. The Magpies’ superior spread and daring ball use began to pay dividends as the inexperienced Bulldogs fell away under pressure, making for a match befitting of the old ‘game of two halves’ cliche.

Pies fans were treated to some nostalgia as father-daughter selection Tarni Brown launched a terrific goal at Collingwood’s spiritual home, before finishing with 15 disposals and four marks. Bri Davey was excellent with 28 touches and a goal, while Brittany Bonnici was Collingwood’s other key ball winner. Chloe Molloy again proved lively inside 50, booting two goals alongside debutant Abbi Moloney.

Hardened Bulldogs Ellie Blackburn and Kirsty Lamb shouldered a heap of responsibility in the midfield battle, but could not quite spark the rest of their side going forward. Ashleigh Guest was strong in defence with five marks among her 16 touches, while Isabelle Pritchard was afforded some midfield time on debut and spearhead Isabel Huntington was kept goalless for the first time this season.

The ladder leading Magpies take on Brisbane next time out in what should be a blockbuster on the road, while the Western Bulldogs are set for another tough test when they lock horns with North Melbourne in Tasmania.

FREMANTLE has rebounded from last week’s loss in style, thumping local rival West Coast by 67 points on Sunday to return to the winners list. A 34-point lead was established by half time and the Dockers never looked back, restricting West Coast to just one goal while piling on the second-highest total in AFLW history to come away 11.9 (75) to 1.2 (8) victors.

Having been held to just one major of their own last time out, the Dockers regained their spark forward of centre to overwhelm the Eagles and claim a second Western Derby win in 2021. It was also the largest margin managed among these two sides’ three meetings, and an especially far cry from the nine-point thriller in Round 2.

Aisling McCarthy was West Coast’s best, the only Eagle to tick over 20 touches as young gun Bella Lewis and Niamh Kelly (both 17) also contributed solidly in the loss. Grace Kelly booted her side’s sole goal of the game and was another to stand up despite the lop-sided scoreline.

Fremantle’s next assignment is a trip to Victoria to face Carlton at Princes Park, while West Coast will remain in its home state and host Geelong at Mineral Resources Park, perhaps fancying a second win for the season.