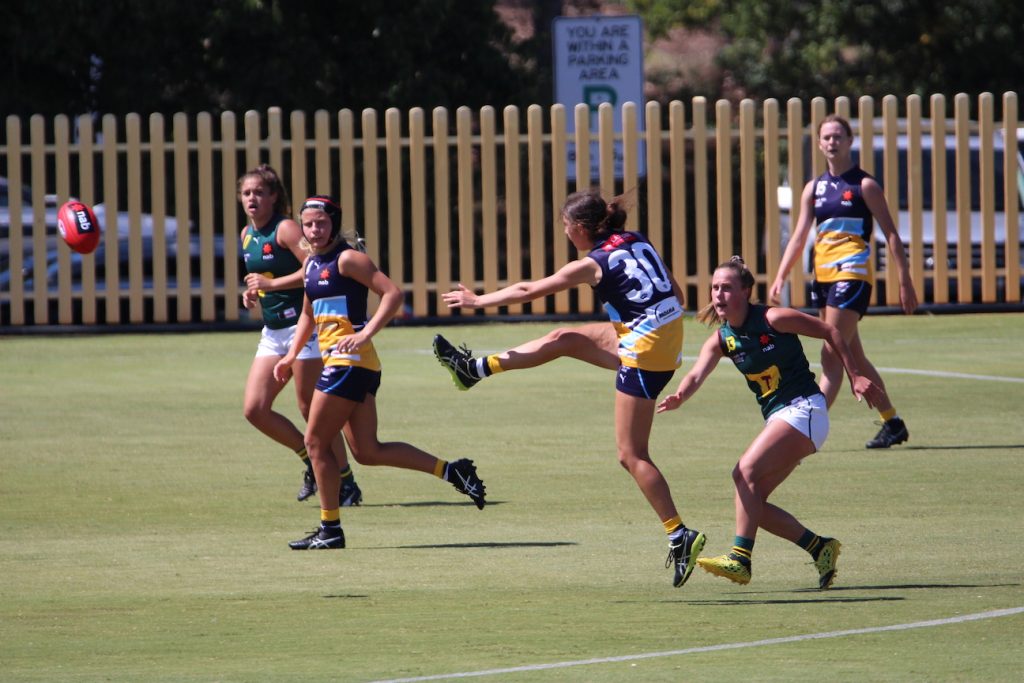 THE 2021 NAB League Girls competition continued with a five-day string of fixtures, playing out Round 5 and making up for some of the postponed Round 2 matchups. In continuing our new weekly series, we take a look at the most memorable moments from each match; whether they be game-defining feats, big marks, glorious goals, or otherwise. There has been plenty of eye-catching action over the last few days, as the best Victorian girls churned out another batch of impressive feats.

Mooney opens on the money

In what was always expected to be a close and physical contest, either attrition or individual moments of brilliance would help break the game open as Northern met Calder. It was the latter to start off, as Knights bottom-ager Simone Mooney got her side on the board. She got on the end of an Ella Smallacombe kick in the first quarter, about 30 metres from goal, before pushing off a Calder defender and slotting the first major of the game. Way to set the tone.

There were plenty of players afield capable of winning the game off their own boot as Oakleigh and Dandenong went head-to-head, and while it ended up being Charlie Rowbottom for the Chargers, Amber Clarke was very nearly the Stingrays’ hero. Having set up a two-goal buffer, the Chargers were pegged back by Clarke in the second and third terms. She was most impactful when stationed deep inside 50 during the third quarter, putting her side ahead in a flash with consecutive goals to dramatically turn the tables. Finishing with three of Dandenong’s four goals, Clarke’s efforts were far from fruitless in the loss.

It might not have been their day, but Octavia Di Donato‘s siren-beater from long range was an effort difficult to forget. With Bendigo having a lot of the play in the opening term and leading by just seven points, Di Donato grabbed the ball and threw it on her boot. The favourable bounce and help from the wind saw it get through right at the final moment for the Pioneers in what was a high moment for the home team prior to the Devils hitting back.

The Murphy and Angelopoulos show

Sandringham Dragons forwards Charli Murphy and Ebony Angelopoulos had days out in front of goal against Gippsland Power, slotting eight of their team’s 12 goals in the big win. It was the first half that really set them up with Murphy booting three of her five, and Angelopoulos slotting two of her three, which at that stage was combined for five of the Dragons’ seven majors to half time. They all but ended the contest in that opening half with their strength and body positioning in the marking contest, and helped the Dragons secure their first win of the year.

A quick turnaround did little to wilt Tasmania’s energy and creativity against Western, and this small snippet of excellence proved as much. The Devils’ Amy Edmand tapped down cleverly to an oncoming Amy Bissett, who crumbed the play perfectly before sending a deep kick inside 50 that eventually led to Tasmania’s second goal. The synergy is there for the Devils in 2021.