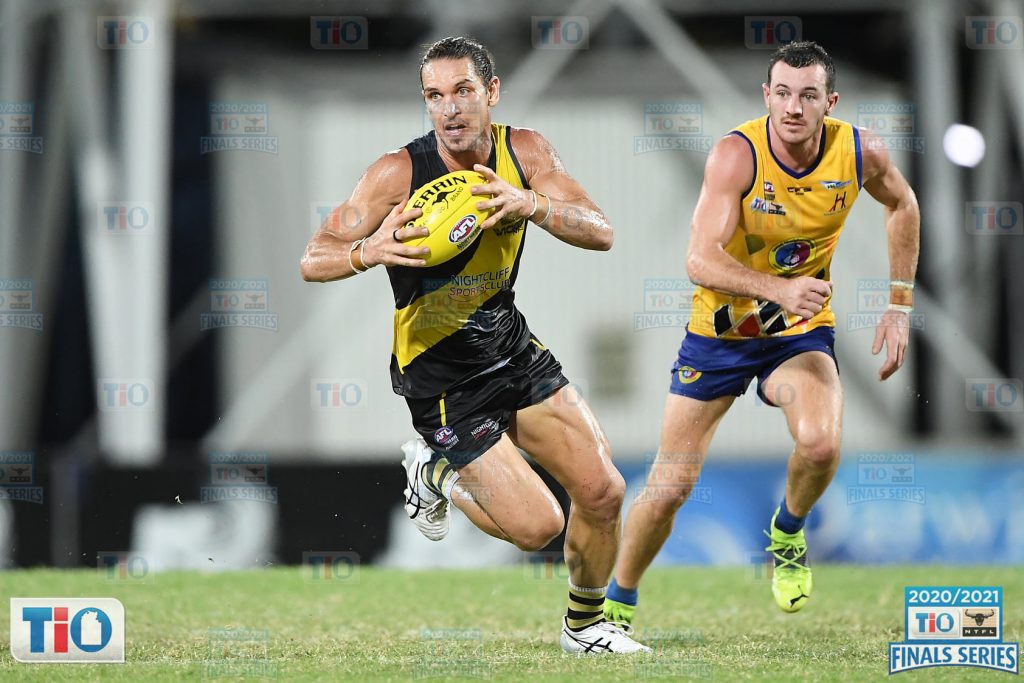 ONE half of the 2020/21 Northern Territory Football League (NTFL) Men’s Premier League grand final matchup has been decided, with Nightcliff advancing through to the decider via Saturday’s major semi final. The Tigers will face either St Mary’s or Wanderers for premiership glory after the Saints bounced back to avoid a straight sets exit, as the final three sides left stay true to ladder order. That, and more in our weekend wrap.

St Mary’s powered into a preliminary final meeting with Wanderers via its 26-point defeat of Waratah in Saturday’s knockout semi. The Saints had plenty of work to do to turn last week’s disappointing form around, but did exactly that by leading at every break in the 14.9 (93) to 10.7 (67) triumph. Waratah’s finals hopes are now over, but Tahs grabbed some late consolation goals upon their exit.

The Saints’ win was somewhat soured as young gun Jacob Long, who has played every game this year, was taken off on a stretcher late in the game. Earlier, Jackson Calder spearheaded the green machine’s attack with six majors as one of his side’s eight individual goalkickers. Daly Andrews and Nate Paredes were terrific at the coalface, while Kieren Parnell and Lachlan Taylor were also outstanding. Cameron Arnold booted three goals for Waratah, as the likes of Timothy Mosquito, Dylan Collis, and Robert Turnbull also stood up in the Warriors’ 2020/21 swan song.

Nightcliff became the first side to qualify for this season’s grand final when it defeated Wanderers by 75 points on Saturday, bringing the Eagles back down to earth with a thud. The Tigers’ firepower proved too hot to handle for a Wanderers defence missing Braedon McLean, with the game all but over at half time. Wanderers also went in without Brett Eddy and Josh Cubillo, though they would have had plenty to make up for in the 17.12 (114) to 6.3 (39) result.

John Butcher was the main destroyer with a bag of goals, including four in the first term to help Nightcliff break clear. Trent Melville was also potent with three majors, while Cam Ilett proved classy as ever and Brodie Filo was enormous around the ball. Shaun Mannagh and Dane McFarlane were among Wanderers’ best, alongside youngsters Thomas Motlop and Brodie Newman. Nightcliff’s Jonathan Peris (200 games) and Wanderers’ Keelan Fejo (100) also celebrated respective milestones.