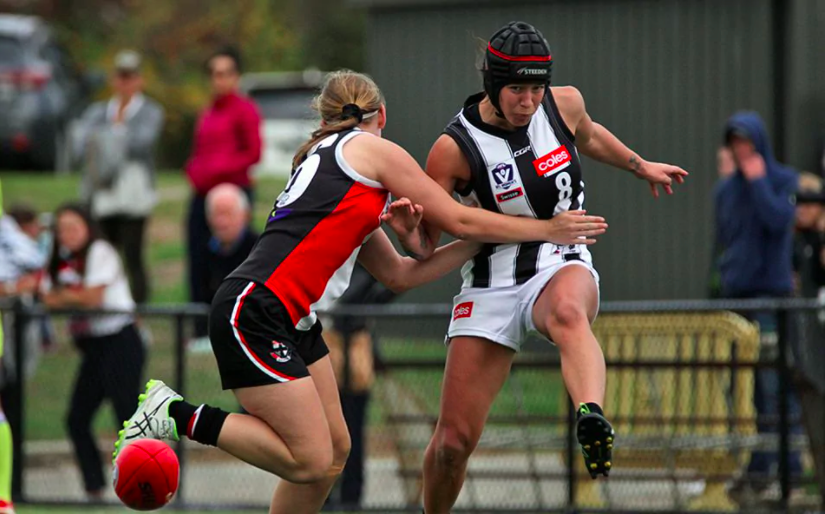 THE 2021 Victorian Football League (VFL) Women’s season rolls on into Round 2 this weekend, with six fixtures spread evenly across Saturday and Sunday. Southern Saints and Collingwood clash in the only meeting between two week one winners, while the likes of Casey Demons and Port Melbourne will look to build on the strong starts which have them poised atop the ladder. We take you through all the key players and factors across each game in our weekend preview.

Collingwood and Southern Saints will make up the sole clash between two Round 1 winners when they lock horns at Victoria Park on Saturday. The Magpies held on to win by two points last week, while the Saints also held strong to beat Essendon and start 2021 on just the right note.

After a four-goal performance, Collingwood forward Imogen Barnett will look to back up her early form alongside the likes of Matilda Zander and senior-listed ruck Bella Smith. Eastern Ranges midfielder Olivia Meagher looms as a promising inclusion for the Magpies, named at the heart of the side after making three NAB League appearances this season.

The Saints will have at least three changes with St Kilda-listed guns Jess Matin, Poppy Kelly, and Rebecca Ott all in line for senior call-ups after promising VFLW displays. Canadian small forward Valerie Moreau is one to watch in the red, white and black having booted two majors on debut last week, but the going will be tough with some key outs against a dangerous Collingwood side.

Williamstown will hope to continue its winning form as it travels to take on Geelong at Deakin University on Saturday afternoon. The Seagulls, who won by two points last week, meet a side in Geelong which lost by the same margin in Round 1 despite a strong finish and the formidable young talent afield.

As an AFLW-aligned team, the Cats will see some key changes to their opening round lineup – starting with the absence of Olivia Barber, Rene Caris, Laura Gardiner, and Darcy Moloney. Senior-listed forwards Stephanie Williams and Maddie Boyd provide some relief, while Geelong Falcons product Renee Tierney also enters the fray as another exciting option.

Williamstown also has some promising young talent to call upon, with its own Falcons coup in Zoe Garth named in defence. Tahlia Merrett is another handy inclusion and promises to provide a touch more firepower up forward, while Danika Di Santo may also get a look in from an extended interchange bench. Despite their current records, Geelong looks the team to beat in this clash.

Casey returns home for its Round 2 clash with Essendon on Saturday afternoon, looking to keep its perfect record in tact. The Demons were comprehensive after half time in their win over Carlton last week, while the Bombers showed some good fight and maturity in their opening round loss to Southern Saints.

Five-goal hero Brenna Tarrant is a key out for Casey after helping kick her side into gear, but the Demons will inject Niamh McEvoy into their forwardline this week. Maggie Caris and Megan Fitzsimon are other senior-listed players to watch through the spine of the side, while Samantha Johnson will again lead from midfield.

The Bombers look to be combining well after experiencing a touch more continuity than other teams, with the likes of Courtney Ugle and Cecilia McIntosh senior players who made a difference last week. They will go around once again, with Mia-Rae Clifford one to watch after a goalless outing and Grace Dicker a promising youngster also entering the fray. The test of another aligned team will be good for the Bombers, who can hopefully compete strongly.

Sunday’s first fixture sees North Melbourne host a second-straight home game, as the Western Bulldogs come to town in a morning meeting. The Kangaroos were outdone by new team, Port Melbourne in Round 1, but the Bulldogs fared much better with an impressive win over Hawthorn.

Former Richmond-listed youngster Ciara Fitzgerald will make her first appearance for North, who have also called upon Jayde Hamilton and will make at least two changes. Tasmanian Sarah Skinner is one to keep an eye on after her opening round performance, providing terrific drive on the outer.

A trio of senior-listed Bulldogs make way this week through injury and otherwise, but Britney Gutknecht remains after her best afield showing. Louise Bibby and Megan Chadwick are a couple of handy inclusions in the red, white and blue, with at least three changes to be made. The Dogs have some quality running about, but should face a hungry North side looking to bounce back quickly.

Two standalone sides are set to do battle in the first game of a La Trobe University double-header, with Darebin taking on Hawthorn at its Bundoora home. Both sides suffered losses in Round 1 but showed promise, with the Falcons falling just short of Williamstown in a low-scoring slog, while Hawthorn fell to a strong Western Bulldogs outfit.

Darebin’s lineup will remain fairly steady following its opening effort in 2021, with just one change expected. Rachel Harris comes into the lineup via the interchange bench, hopefully making a difference for the women’s footballing pioneers. Finishing will be a key area of focus for the Falcons, so watch for Hayley Munro to impact should she be able to capitalise on her chances.

Hawthorn will be forced into a raft of changes this week, with none bigger than skipper Jess Trend missing through injury. The experienced Abbey Holmes is also out along with Dominique Carbone. The likes of Chloe Bain and Olivia Flanagan should provide some respite along with Maddi Shaw, while Eastern Ranges prospects Isabelle Khoury, Tilly Hardy and Jess Grace are promising inclusions. Should they settle amid said changes, the Hawks should prove tough to beat.

The round’s final game sees Carlton take on Port Melbourne at La Trobe University on Sunday afternoon, with the Blues out to claim their first points in 2021. Their opening round loss to Casey was a far cry from Port’s momentous maiden win over North Melbourne, which makes this contest a tough one to call.

The Blues will make a couple of changes, building on their initial lineup. Experienced senior player Jess Edwards should serve the defence well alongside leaders Jen Lew and Ally Bild, while Paige Trudgeon looks to impact once again after her two-goal outing and Winnie Laing promises to provide plenty of outside run.

The Borough will lose their Round 1 spearhead in Christina Bernardi as she looks to crack the Richmond side, but former Carlton utility Bride Kennedy is a promising inclusion. Melissa Kuys will again be Port’s key player at the heart of the lineup, helping lead some promising young talent listed at AFLW and VFLW level.