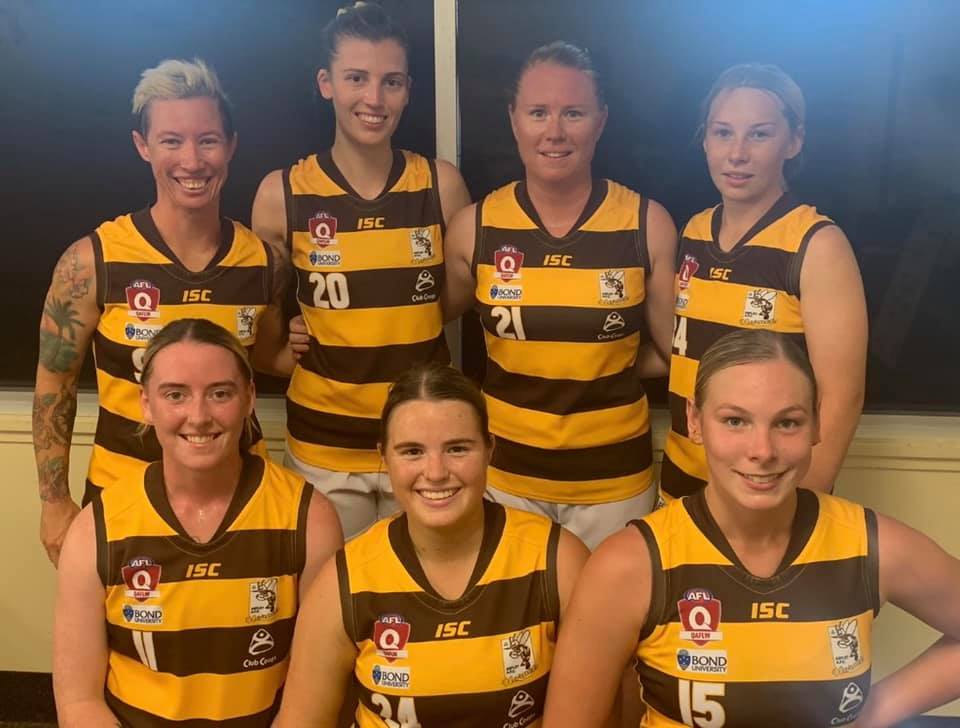 THE four Round 1 victors in the Queensland Australian Football League (QAFL) Women’s competition will lock horns with the four losers from the opening weekend, with the chance to gain early separation between the sides.

Two competitive outfits in Round 1, but on opposite ends of the scale were Bond University and Coorparoo, who lock horns in a Round 2 clash. The Kings dropped their first game to the resurgent Aspley Hornets, while the Sharkettes overcame stiff competition from Maroochydore to get the victory. The visiting side today will be hoping to bounce back from that Round 1 defeat, and press forward with a strong effort against last year’s minor premiers.

Emma McKenzie was the Kings’ sole multiple goalkicker with two majors in the Round 1 contest, while Jenae Govan and Josii Hargreaves also hit the scoreboard. Laura Blue, Renee Teys and Meg Muir are others to watch for the visiting team, with the entire team needing to step up if they are to claim the victory on the road. Bond University had a great spread, with Caitlin Thorne snagging two goals, and a host of others including Shannon Danckert and Lily Tarlinton kicking majors. Danckert in particular is a key player for the Sharks, named best on ground in the win over Maroochydore. Mikayla Pauga is one of the top Queensland talents this year, while Annie Muir is another developing prospect who is a regular contributor. She might not have kicked a goal in the opening round, but Jasmyn Davidson is the player to try and contain after her super effort last year up forward for the Sharkettes. Both these teams started slow last round and will be keen to make amends from the get-go, with the home ground advantage to suit Bond University in the clash.

The Round 2 match between Aspley Hornets and Coolangatta Tweed has a very different lead-in to recent years, with the Hornets coming off a good win, and the Bluebirds struggling against reigning premiers Yeronga South Brisbane. Coolangatta Tweed kicked seven behinds in the second half against Yeronga South Brisbane, showing that they had their chances, but could not capitalise like their opponents who kicked 3.4 from the same amount of scoring options. For Aspley, the Round 1 win over Coorparoo was the Hornets’ first since 2019, and had all of their developing talent on display.

Lucia Liessi was named best-on for her performance, kicking a goal and standing out like fellow youngster Isabella Kotatis. Michaela Campbell has proven to be a danger player in the competition, and she slotted two goals in her opening round effort, while the likes of Courtney Daniec and Lucy Pengelly cannot be discounted when it comes to potential match-winners, though it was a team effort with seven debutants taking part in the win. For the Bluebirds, they also have a heap of young talent, with Brisbane’s Beth Pinchin standing up despite the loss, and other young players in Sophie Ure, Keyshia Matenga and Kitara Farrar all quality talents who provide speed and strength to the team. One would expect Coolangatta Tweed to be hungry to bounce back, so this will be a great test for the Hornets and their host of young players.

MAROOCHYDORE vs. UNIVERSITY OF QUEENSLAND

Another battle of teams coming off opposing results in Round 1, Maroochydore took it up to Bond University in their opening weekend clash, while University of Queensland put Wilston Grange to the sword during a 39-point victory on the road. The Red Lionesses were really impressive in their away win, blitzing the Gorillas in the first half with five goals to one to set up the victory, and will hit the road for a second consecutive weekend. Maroochydore just took too long to get started, and kicked all of its three goals in the final term after kicking four behinds to three quarter time in the 19-point defeat to Bond University.

Jya Epstein, Rachel Crack and Chloe Gregory were all among the best in the Roos’ defeat, with Jacqueline Dupuy kicking a goal and will be one the Red Lionesses need to watch. Ex-Calder youngster Makeisha Muller booted a goal in the defeat as well, and is one of a number of young talents coming through, as Brianna McFarlane will be hoping for a clean run this year after her anterior cruciate ligament (ACL) injury at AFL Women’s level, and got the first game nerves out of the way. Grace Brennan was the key player for the Red Lionesses in their win, slotting three majors, while Madi Crowley-Long booted a goal and was named best-on in the victory. The Roos will need to be wary of the likes of Megan Hunt and Jane Childes impact on the game after the pair started strongly in Round 1. Expect it to be a tight contest, with the Red Lionesses favourites, but Maroochydore always a chance.

The final game of the round pits teams at opposite ends of the ladder against each other, with the top of the table Yeronga South Brisbane winning by 57 points over Coolangatta Tweed in a grand final rematch, while Wilston Grange suffered a 39-point loss at the hands of University of Queensland. The Devils showed why despite a breakthrough premiership, they will remain a title contender in 2021, while the Gorillas will have the opportunity to test themselves against the benchmark team on the road.

Zimmorlei Farquharson is the danger player and every game the Devils have her in the side away from her AFL Women’s duties is a huge positive. She is hard to match in the air or at ground level, and she slotted three majors in the Devils’ big Round 1 win. Mia Walsh was named the Devils’ best in that victory, while Lucy Bellinger has plenty of experience across multiple state leagues and is a crucial player. Madison Goodwin, Christine Okesene and Emmii-Lee Zanker-Close are among a host of young Devils who can impact a contest regularly. For Wilston Grange, the Gorillas will be looking for a better first half than their five-goal deficit last week, and it will be the likes of Ruby Svarc who provide the AFL Women’s experience. Holly O’Flaherty and Brooke Sheridan booted the home team’s goals last week, while Mackenzie Findlay and Abby Hewett started the season off strongly. Yeronga South Brisbane is the team to beat overall in the QAFL Women’s, so the Devils will be strong favourites here.