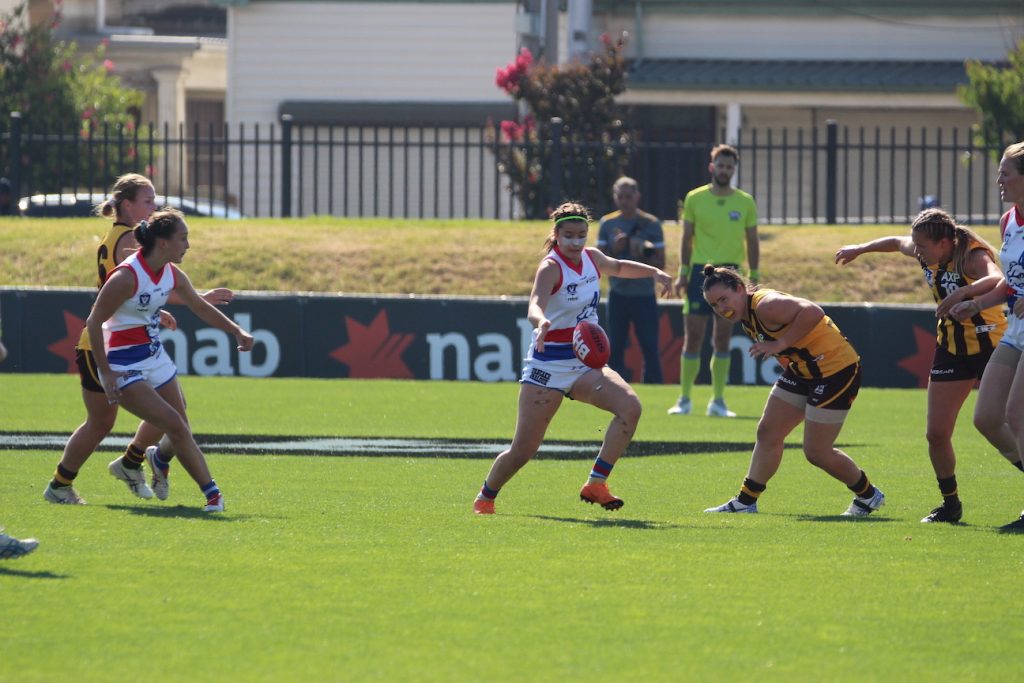 A HEAP of young prospects are set to filter through the Victorian Football League (VFL) Women’s competition in 2021, with the revamped structure allowing Under 18 and 19 NAB League players to align with state league sides as both seasons run concurrently. Round 1 saw plenty of talent scattered across each side, and we will also take a look at how VFLW-listed players have graduated in the last three years from the NAB League performed.

A couple of draft eligible prospects who have already played in the NAB League this year earned VFLW berths this weekend, with Western’s Marli Klaumanns-Moller and Murray’s Kate Adams running out for North and Port Melbourne respectively. The former is a 20-year-old defender with some exciting traits, while the latter is capable of playing on each line while rotating through midfield. Another former Bushranger in Sophie Locke also played for North, booting a goal as the Roos fell by 33 points.

Former Geelong Falcons midfielder-forward Paige Sheppard made a successful return to football, coming back into the Cats’ VFLW fold and earning a spot among their best players. Northern Knights product Neve O’Connor got her chance with Collingwood, adding to the Pies’ tall stocks as they got up by two points.

Carlton fielded a host of recent graduates in its loss to Casey, who were serviced by former Oakleigh ruck Bridie Winbanks. Ex-Chargers coach Luke O’Shannessy has taken the reigns at Carlton and unleashed Amber Micallef for some nice passages through midfield, while the likes of Teagan Brett (Murray) and Shanara Notman (Gippsland) both had their hands full in defence. Northern graduate Marnie Jarvis and Western product Taylah Kolevski also took the field in navy blue.

The Western Bulldogs and Hawthorn also blooded some promising youth at Whitten Oval on Sunday, as the home side got up by eight goals. Former Bendigo Pioneers captain Brooke Hards showed some burst and grit from midfield, as Nikita Wright stepped into the side after a couple of games with Western this year, and Molly Denahy Maloney also got her chance in the red, white and blue.

A trio of metro region graduates appeared for Hawthorn, headlined by Jemma Owen who booted a goal and was the Hawks’ standout player. Lauren Szigeti was another among her side’s best players in the loss, with Chloe O’Malley also donning the brown and gold in Round 1.

Former Calder teammates Alana Barba and Felicity Theodore again joined forces with Essendon on the weekend, with Eloise Ashley-Cooper another NAB Leaguer to feature in the sash. Barba was among Essendon’s most productive players, bringing her contested acumen and also kicking a goal.

Gabby De Angelis found the big sticks too, only for the Southern Saints as they won out by 18 points. Ex-Oakleigh tall Amelia Peck and Grace Hodder were among the other NAB League products to feature in the win. In Williamstown’s victory over Darebin, Megan Williamson and Ruby Tripodi were productive going forward, both kicking goals in the low-scoring affair and producing some handy highlights.