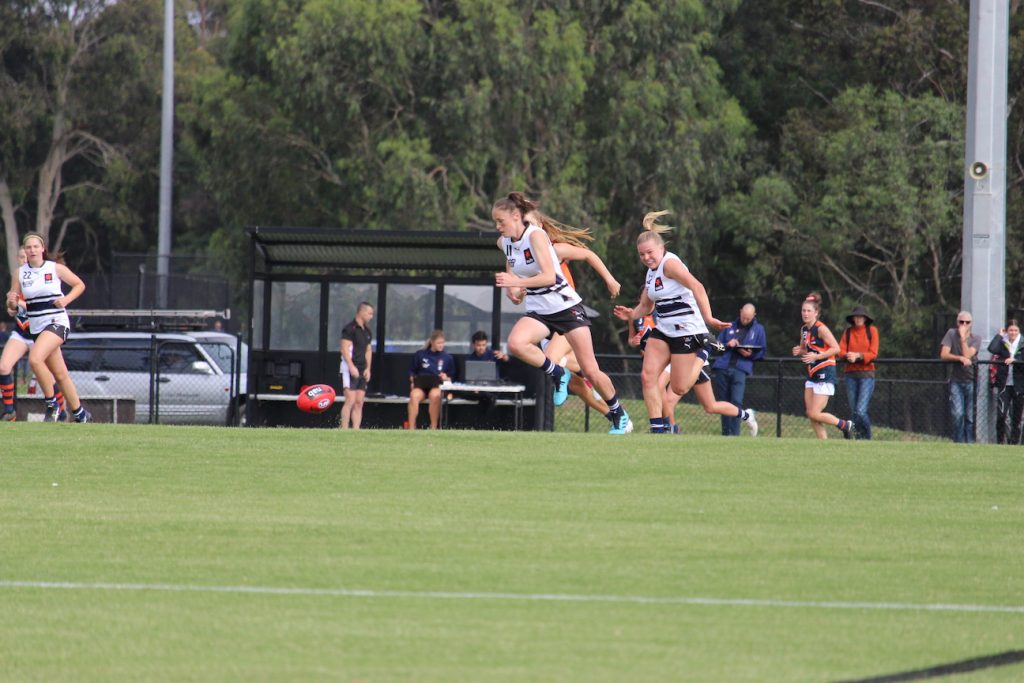 IN a very different footballing landscape, change has become something that everyone has had to deal with in one way or another, and in 2021, the NAB League Girls competition has managed to find a way to make up for lost time. The Round 2 fixtures which were cancelled due to Victoria’s snap lockdown will be played over a few weeks, in midweek fixtures, including three of the six matches over the next six days. These three matches will coincide with the three regular Round 5 matches which were scheduled to take place anyway, meaning fans will be able to attend all six games across six different days.

Kicking off the long weekend is the first of the Round 2 rescheduled fixtures with Calder Cannons hosting Northern Knights at prime time on a Thursday night. It is arguably not what the grand final rematch of 2019 was expected to be, but the teams will be able to strut their stuff in the first night game of the season. Daylight savings help the players with light for most of the match, though expect both these teams to have to adapt to the conditions – much like the ever-changing fixture. Both these sides come in with 2-1 records, having both lost to Oakleigh Chargers, whilst both have also accounted for Sandringham Dragons. On the weekend, Calder scraped across the line in a thrilling comeback against Bendigo Pioneers, whilst Northern put Gippsland Power to the sword in Morwell East.

After their respective Round 1 matches, coming into the initial Round 2 fixtures, it was seeming like Calder Cannons were red-hot favourites for the grand final rematch. Having just taken care of Sandringham Dragons while the Knights were blitzed by Oakleigh, it was no better time for the 2019 runners-up to strike. A week – let alone two – is a long time in football, with a stirring final term from the Cannons up at Epsom Huntly saving them from back-to-back losses since that Round 1 win. The Knights on the other hand booted three goals in six minutes against the Dragons in the opening term of their Round 3 encounter, and have not stopped kicking them since, winning both their games by large margins. Megan Girolami is the in-form player of the competition, booting nine goals from her two games and seems to be the lucky charm the Knights needed since the Round 1 defeat.

The Cannons defence is well-balanced across the board, with Kasey Lennox the rock at the back, and Peppa Poultney and Neve Crowley both capable of dropping back and helping out, while Tahlia Gillard can play at either end. It will need to be a team effort to try and contain the Knights’ forward line which includes the likes of Trinity Mills (three goals on the weekend) and Ella Smallacombe, who have become leading targets inside 50. Maeve Chaplin copped a knock early in the win against Gippsland Power and sat out the entire second half as a precaution, but has been named to face the Cannons. She is crucial in there to face the likes of Georgie Prespakis and Emelia Yassir who win plenty of the ball in close. Maykaylah Appleby returns to the side in a crucial inclusion for the Knights to provide some extra run, whilst for the Cannons, Zali Friswell will join Gillard, Prespakis and Yassir in the middle to form a deadly onball combination.

This is set to be a cracker, and it will come down to whether or not Calder can control the ball through the midfield to limit the supply to Northern’s damaging forwards, or if the Knights can use the ball well enough going forward to isolate the well-organised Cannons defence.

A top-of-the-table clash between unbeaten sides, Dandenong Stingrays and Oakleigh Chargers takes place at prime time on Friday night down at Linen House Centre in Seaford. The Stingrays have only played the two games but have not put a foot wrong, accounting for the Western Jets and Greater Western Victoria (GWV) Rebels in Rounds 3 and 4 after a bye in Round 1, and the lockdown in Round 2. Oakleigh Chargers easily saw past Northern Knights in the opening round, then took out one of the title contenders in Calder Cannons, before having to fight tooth-and-nail on the Apple Isle after Tasmania Devils took it right up to them for four quarters in an absolute epic contest. Now the sides come in unblemished, and with ridiculous depth across all the lines, making it a must-watch contest from the get-go.

The Stingrays come in with one of the strongest back six combinations going around. With Zoe Hill and Mackenzie Eardley holding down the fort – and the latter also going forward and kicking two goals last week – and Jaide Anthony in ripping form, Dandenong is hard to score against. Brooke Smith provides the classy run out of the back half, while in the front half, Amber Clarke has the speed to burn and hits the scoreboard as well. The Chargers do not rely on one source for goals, with Ameille Smith slotting three in the opening game, and Holly Kenealy being the key scorer with three of her own on the weekend in a low-scoring contest. Stella Reid has impacted the scoreboard off a wing, while Charlie Rowbottom can do it all from the inside midfield.

The matchup to watch has to be between two of the most in-form midfielders in the competition in Rowbottom and Emily Shepherd, who have natural ball-winning skills and the ability to go forward and have a huge impact on the scoreboard. With Amanda Ling and Abbey Jordan sharing similar athletic traits, there are plenty of matchups throughout the middle to keep an eye on. In defence, Brooke Vickers has been a reliable player, while Reid has been one to drop back and provide an extra number when required, which might be so against a Stingrays outfit that can attack quickly. Jemma Radford leads the Stingrays goalkicking with four majors in her two games, whilst Clarke and Ashleigh Richards have both slotted three this season.

It is near-impossible to predict a winner in this one, the Stingrays are at home which might give them the upper hand, but one thing is for sure, this is set to be a beauty, and based on form, one of the potential grand final previews.

Nothing is better for motivation than coming within a whisker of a huge upset but falling narrowly short. Luckily for spectators heading to LaTrobe University on Saturday, both these teams are in a similar boat. Bendigo Pioneers looked about a goal away from being home against Calder Cannons, only for a stunning last term fightback and the Cannons to storm home with three majors and the win in what was a brave, but ultimately disappointing loss for the players who showed just what they were capable of. No doubt during the week what they achieved for three quarters will have been emphasised, and they will be ready to go against a Tasmania Devils outfit that pushed the unbeaten Oakleigh Chargers to the limit. Perhaps the most impressive aspect was the fact the Devils were smashed by the Chargers to the tune of 102 points 12 months ago, and they were neck-and-neck with them to the final siren this year.

Tara Slender continues to defy the realms of positional possibilities, after the key defender turned key forward developed into a midfielder on the weekend where she racked up a round-high 28 disposals. It showed the high-end Vic Country prospect can be utilised in any role, and it helped nullify the impact of the Cannons midfielders. Against the Devils, she will likely be added as a target again, but Tasmania have some quick players who can move the ball in transition, led by Perri King and Claire Ransom in the mid-forward half of the ground. The key for the Pioneers will be winning the ball at the stoppages and using it well when extracting it, with the likes of Elizabeth Snell and Jayda Richardson – when rolling through the ruck – those contested ball winners.

Up forward, Amy Prokopiec booted four goals against Gippsland Power in Round 1 and can be a danger against most opposition, with a potential head-to-head with the in-form Tegan Williams something to keep an eye on. Some of the more in-form players over the first few weeks for the Pioneers include Jemma Finning and Octavia Di Donato in the back half, as well as Drew Ryan and Lily den Houting who know how to find the football. Tasmania’s Ella Maurer had a strong performance with 20 touches in Round 4, whilst Meghan Gaffney and Madison Brazendale accumulate the ball on a regular basis. Candice Belbin has been used to distribute in the back half, while Aprille Crooks is another defender who can play up the ground as well.

Another 50/50 contest, it is hard to pick which side gets up in this game, with both teams clearly improved on their 2020 seasons, and it means that for one of them, they will grab their second win of the season.

Two winless sides clash on Sunday in a midday battle at Ronald Reserve in Morwell East. The Sandringham Dragons are rested and ready to go after a break in Round 4, having lost to Calder Cannons and Northern Knights in Round 1 and Round 2 respectively. They now make the trek down the highway to face a Gippsland Power side that is coming off three consecutive losses to start the season. The 62, 114 and 72-point losses do not look favourable on paper, but for patches throughout those games the Power were able to remain competitive and match it with the opposition. That being said, with lapses costing goals, it is hard to win games, and Gippsland will be hoping another home game at Ronald Reserve will help them push the Dragons here.

The Dragons will see this as a crucial game to win and kick-start their season given the busy schedule coming up which will feature a Wednesday night fixture against Dandenong Stingrays in a couple of weeks. Pia Staltari has been a ray of consistency for the Dragons, coming out of defence and being a steady head with ball-in-hand. She will be tasked with clearing the defensive zone, given the Power can match the Dragons on the inside with bigger bodies such as Grace McRae and Lily-Rose Williamson, which could mean more clearances and inside 50s. While the Power have strength, the Dragons have speed, and a number of outside players who can run the ball in transition such as Kiana Lynch, Keely Coyne and Charlotte Ryan.

Bridie Hipwell has been a huge loss for the Dragons as that bigger body at the stoppages, and against the Knights, it was the likes of Chaplin who took full advantage. Gippsland Power will be favoured to get first hands to it at the stoppage through Grace Matser who played her best NAB League game last week, while Sofia Hurley and Chloe Saultry will bring the tackling pressure required in there. Ebony Angelopoulos will look to get on the end of a few goals, leading the team with three majors and key forward Charli Murphy having two. The Power have only booted the two goals, but have some promising talent coming through for next year led by Williamson and Yasmin Duursma in midfield.

Sandringham Dragons are favourites in this one given the team’s respective losses, but Gippsland should be able to get first hands on it through the ruck and bigger bodies inside, so it will be up to how they use the ball going forward that will be key.