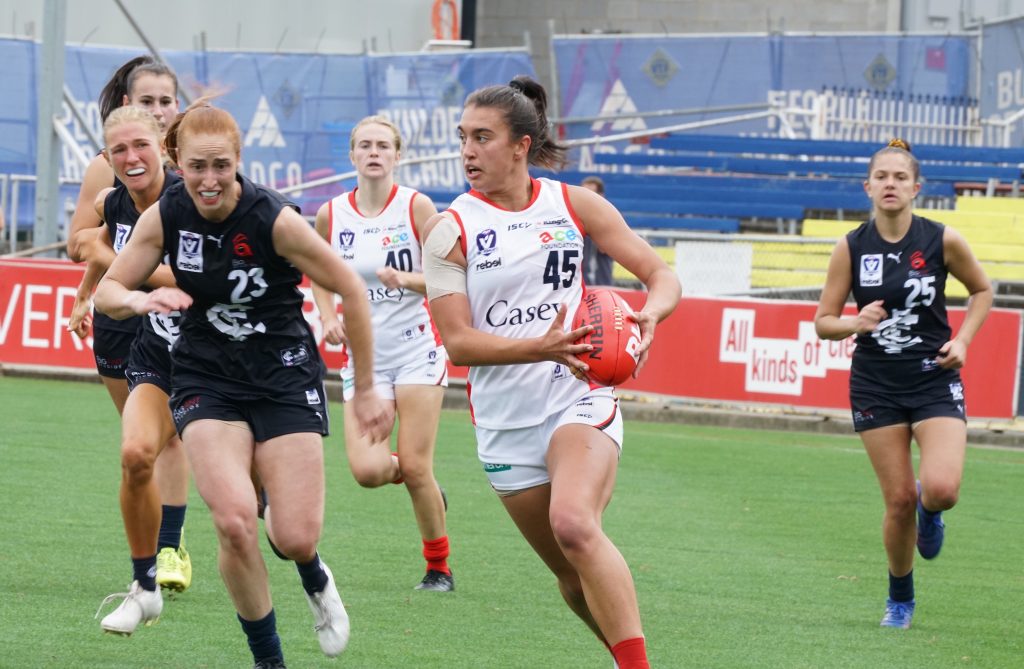 THE Victorian Football League (VFL) Women’s returned on the weekend after a year away, bringing with it a revamped structure and all-new team in Port Melbourne. With the season running concurrently alongside that of the AFLW, top-flight players from Victorian clubs who miss out on senior action will be able to run out for what are effectively reserves or sides in the VFLW. Round 1 saw promising elite level talent scattered across the eight aligned teams, with players immediately staking claims for call-ups.

Starting at the season opener at Arden Street, Port Melbourne mixed its boom recruits with Richmond-listed players hungry to break back into the yellow and black. Atop the list was forward Christina Bernardi, who booted a game-high three goals for the Borough. Young defender Sarah Sansonetti was productive in the back half, while Alice Edmonds booted a goal and was named among Port’s best alongside injury replacement, Hannah McLaren.

For the Roos, first year player Alice O’Loughlin was recognised in her side’s best players on debut for her role in the 33-point loss. Former basketballer and fellow 2020 draft selection Brooke Brown also impressed with her aerial nous and even managed to hit the scoreboard with one goal. Katelyn Cox was another notable Roo to take the field, having not yet registered a senior outing.

The impact of key position players carried on into Collingwood’s side, as senior ruck Bella Smith was reunited with former Norwood teammate Matilda Zander, as both kicked a goal in black and white. Utility Maddy Shevlin also troubled the scorers with one major and was among the Magpies’ best on the day as they won by two points.

The round’s only other all-aligned clash saw Casey trump Carlton at Princes Park, with second-year Melbourne prospect Brenna Tarrant a dominant force. She finished with five goals, spurring her side to victory after the Blues hit back with terrific contested marking and positioning. Midfielder Megan Fitzsimon was also among the action and snuck forward well, while young tall Maggie Caris competed well in the red and blue.

Winnie Laing was the pick of Carlton’s senior-listed players, leaning on her running capacity to find plenty of the ball on the wing and cracking in hard despite her light frame. New signing Paige Trudgeon showed some promise up forward as a raw target and snared two handy goals, while Charlotte Hammans did her best to drive the Blues forward from behind the ball. She was named among their best players.

Western Bulldogs and Southern Saints were the other two aligned clubs in action, picking up wins against Hawthorn and Essendon respectively. Midfielder/forward Britney Gutknecht was clearly best afield in the Dogs’ win and snagged two goals, with Isabelle Pritchard also prominent. The pair were two of six senior-listed Bulldogs to find the big sticks, as new coup Annabel Strahan impressed down back.

For the Saints, Jessica Matin put her hand up for another top flight opportunity after a dazzling performance. She booted three goals, had plenty of the ball and laid some terrific tackles in a well-rounded display. Another newcomer in Rebecca Ott was recognised for her efforts, while Poppy Kelly dominated in the ruck and also made an impact with ball in hand.

Stay tuned for a wrap up of the NAB League graduates and young guns who also made a splash in Round 1 of the revamped competition, with plenty more young talent set to hit the state league as the year progresses.