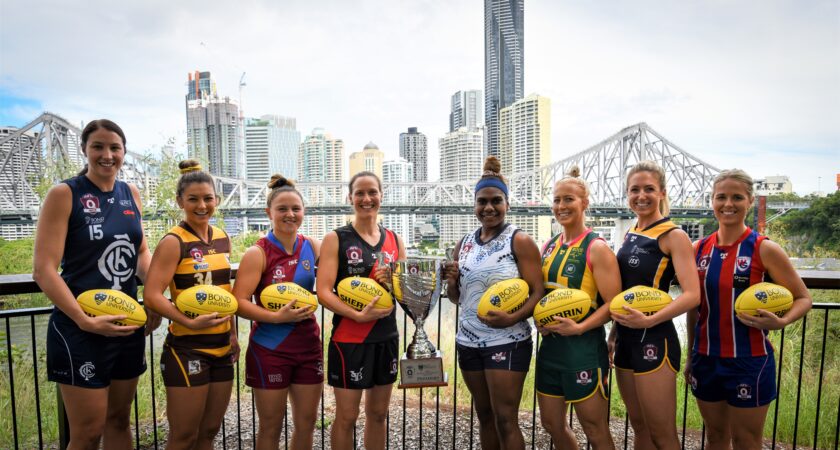 SATURDAY June 29, 2019. That was the last time Aspley Hornets sung the song, following a 61-point trouncing over Wilston Grange on the road. They have won two consecutive Queensland Australian Football League (QAFL) Women’s wooden spoons since then and lost 16 consecutive games. But on Saturday, the Hornets were able to break through for that much-anticipated win when they knocked off Coorparoo by 26 points. Leading at every break, the visitors booted at least two goals in three of the four quarters during the 7.10 (52) to 4.2 (26) win over the Kings.

Michaela Campbell booted two goals, while youngster Lucia Liessi was named best on ground for her role in the victory, which included slotting a goal. Courtney Daniec, Isabella Kotatis, Charlotte Mullins and Alanna Perry also slotted goals in an even team performance, which saw the Hornets boot 4.2 after half-time following a somewhat inaccurate 3.8 in the first half. Nonetheless they finished with 17 scoring shots to six in an impressive display.

Melissa McPhee and Anais Kirvan were also rewarded for their efforts in the winning side by being named amongst the best. For the Kings, Emma McKenzie slotted two goals, while Josii Hargreaves and Jenae Govan also hit the scoreboard. Renee Teys was named Coorparoo’s best, while Meg Muir and Alexanderia Grace were also impressive in defeat.

In the replay of the 2020 QAFL Women’s Grand Final, Yeronga South Brisbane unfurled the flag, then unleashed on Coolangatta Tweed in an impressive 57-point victory. The Devils held the Bluebirds goalless in the match, with the visitors scoring seven behinds in the second half to go down, 9.11 (65) to 0.8 (8).

Zimmorlei Farquharson backed up her grand final performance with another three goals to put her hand up for AFL Women’s selection, leading a host of young players in the victory. The Devils had seven individual goalkickers, with the likes of Madison Goodwin, Christine Okesene, Emmii-Lee Zanker-Close, Lexia Edwards, Lily Bougoure and Courtney McDonnell all hitting the scoreboard. Whilst the Bluebirds did not managed to have a goalkicker, the likes of Sophie Ure, Beth Pinchin and Keyshia Matenga were all amongst the top players.

Bond University got its 2021 season off to a perfect start, defeating Maroochydore by 19 points at home. The Bullsharks controlled the first three quarters to boot four goals from nine scoring shots to the Roos’ four behinds, and while the visitors managed to pile on 3.1 in the final term to cut the deficit, Bond University was too strong, claiming the win 6.6 (42) to 3.5 (23).

Shannon Danckert was named best on ground in the win, booting a goal as did Lily Tarlinton who was also named in the bests, Caitlin Thorne was the sole multiple goalkicker with two snags, while Gabrielle Deller and Eloise O’Brien scored majors. Jess Scott, Lucinda Pullar and Krystal Scott stood out from a Bond University perspective, whilst from the Roos, Jya Epstein, Rachel Crack and Chloe Gregory were the top players. Imagen David, Jacqueline Dupuy and Makeisha Muller hit the scoreboard in the loss.

In the final match of the round, University of Queensland enjoyed a big win over Wilston Grange, cruising to an 8.9 (67) to 2.6 (18) victory. Grace Brennan slotted three goals for the Red Lionesses to be the key target on the ground, while Lauren Middleton, Rachael Vetter, Lucinda Benjamin and Madi Crowley-Long all scored majors. Crowley-Long was named best-on for the winners, while Jane Childes, Megan Hunt and Halle Pearce were also impressive. For the Gorillas, Brooke Sheridan and Holly O’Flaherty both kicked goals, while Abby Hewett, Daisy Carter and Mackenzie Findlay were all named in the bests.

Round 2 in the QAFL Women’s sees the four games at four different days, and in a quirk of the fixture, the four Round 1 winners play the four Round 1 losers. Bond University kicks off Round 2 with a home against against Coorparoo, Maroochydore hosts University of Queensland, Aspley Hornets return home to face Coolangatta Tweed, while Yeronga South Brisbane takes on Wilston Grange.