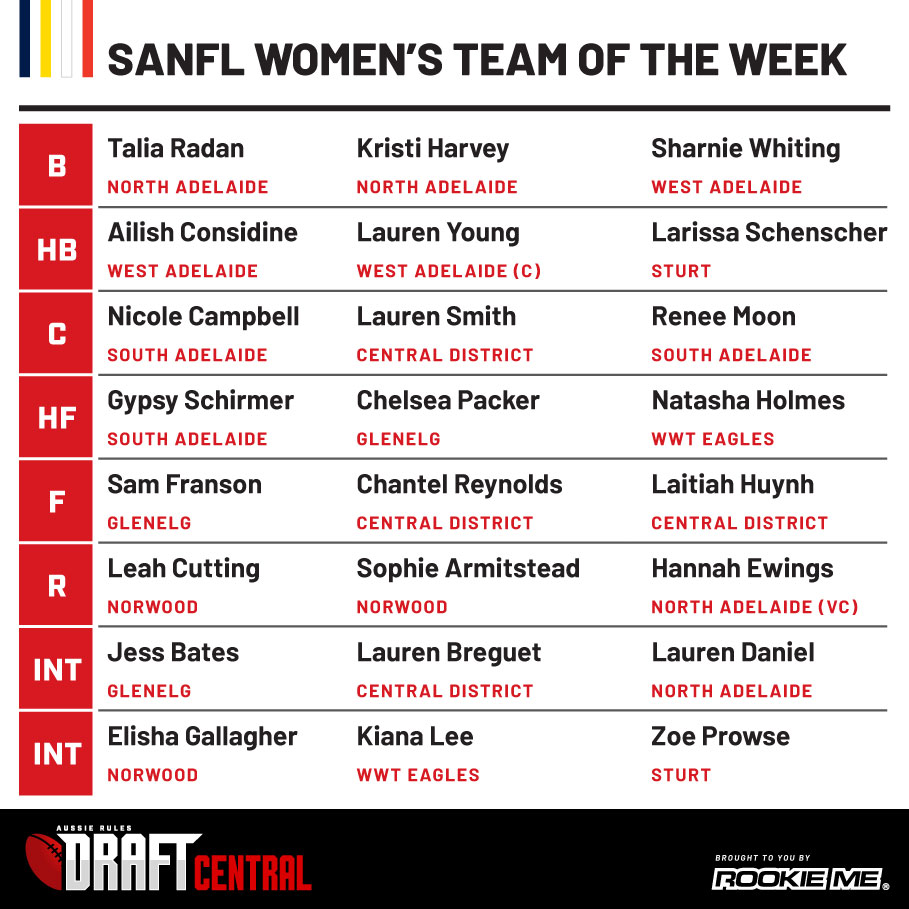 NORTH Adelaide and Central District lead all-comers in terms of nominations for the Draft Central South Australian National Football League (SANFL) Women’s Team of the Week for Round 1. The competition kicked off in style over the weekend, with the Roosters and Bulldogs both picking up impressive wins, whilst fellow Round 1 winners, Glenelg and West Adelaide had three players apiece. Round 2 losers, South Adelaide and Norwood also had three apiece, while Sturt and Woodville-West Torrens were on the end of bigger losses but still had the two players.

North Adelaide’s premiership defence started off in style with a strong win over their grand final victims, South Adelaide on Friday night. The defence was on-point with Talia Radan and Kristi Harvey both named in the Team of the Week back six, alongside teammates, Hannah Ewings and Lauren Daniel. Ewings was the second best performed player of the round, and earned the vice-captain nod, quite the achievement for a 16-year-old.

Central District showed how much it had improved on last year’s wooden spooner effort, with also having four players in the team. Lauren Smith has been named in midfield, while the dynamic tall-small duo of Chantel Reynolds and Laitiah Huynh are deep forward after combining for five goals. Another youngster in Lauren Breguet has made her way onto the bench.

West Adelaide debutant Lauren Young might be only 15-years-old but showed age is no barrier to talent, with the teenager earning the captaincy nod following a clear best on ground performance against Norwood. In the Bloods’ win, Young played between midfield and defence, and led the league in disposals, rebounds and marks for Round 1. Other West Adelaide players in the side are Adelaide’s Ailish Considine off half-back, and Sharnie Whiting who also rounds out the back six with a distinct West flavour.

The final winning side in Glenelg had three players in the team, with forward/midfielder Sam Franson, key target Chelsea Packer, and midfielder Jess Bates all earning a nod in the opening round. In terms of the losers, Norwood had a trio of players this week are through the midfield, with ruck Leah Cutting and midfielders, Sophie Armitstead and Elisha Gallagher making the side. South Adelaide’s trio of Nicole Campbell, Renee Moon and Gypsy Schirmer made their way into the side despite the defeat, in what was an even team performance from the Panthers and many that could easily have been included.

From the heavier losses, Sturt’s Larissa Schenscher joined Zoe Prowse in the Team of the Week, while Woodville-West Torrens’ Natasha Holmes and Kiana Lee both earned places in the 24-player squad. In terms of the emergencies, South Adelaide’s Sophia Flanagan-Sjoberg, Glenelg’s Ellie Kellock and Sturt’s Isobel Kuiper were the nominated players.

DRAFT CENTRAL’S SANFL WOMEN’S TEAM OF THE WEEK: ROUND 1