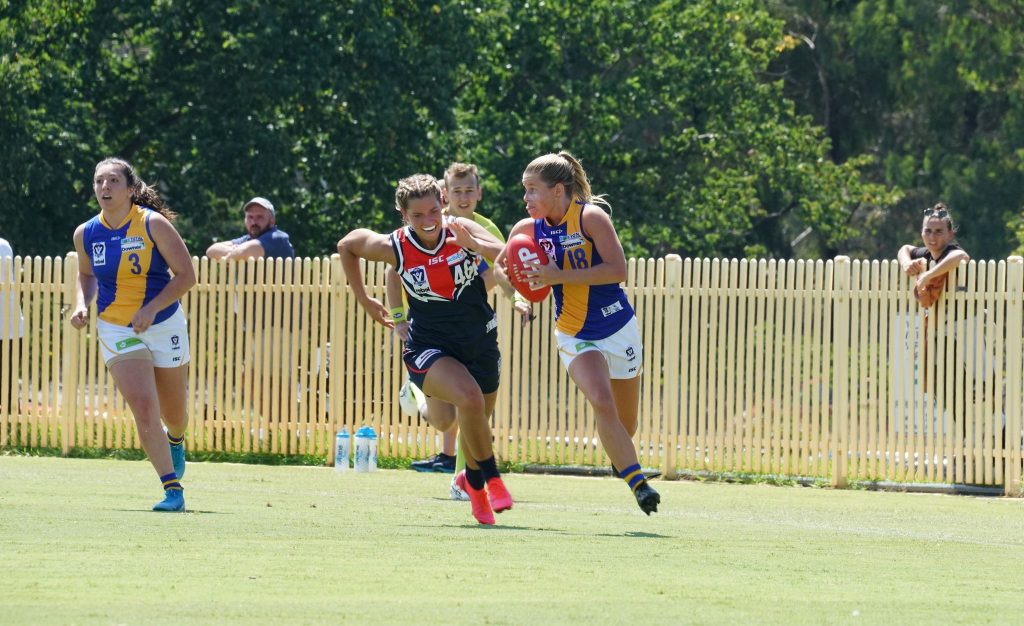 PORT Melbourne celebrated its maiden Victorian Football League (VFL) Women’s appearance with a win on Saturday morning, helping kick off the 2021 season in style. Collingwood and Williamstown each held on to secure thrilling two-point victories, while Casey, the Southern Saints and Western Bulldogs also started their campaigns on the winners list. That, and more in our Round 1 wrap.

Port Melbourne’s inaugural VFLW campaign got off to the perfect start on Saturday morning, as the Borough kicked away to a 33-point victory at Arden Street Oval. While Port led at every break, North remained in the hunt up to half time at only eight points adrift, before the Borough kicked away with five goals in the second half to claim a historic 8.7 (55) to 3.4 (22) win. Richmond-listed forward Christina Bernardi found some scoring form with three majors for Port, while fellow goalkickers Melissa Kuys, Alice Edmonds, and Elizabeth Wilson were among the victors’ best players. Meagan Kiely and ruck recruit Lexi Hamilton found the goals for North Melbourne, who also blooded fellow scorer and 2020 draftee Brooke Brown. Skilful winger Sarah Skinner was named the Roos’ best in the loss, as they look to regroup against the Western Bulldogs in Round 2. Meanwhile, Port takes on Carlton next time out.

Collingwood warded off a fast finishing Geelong to win by two points on Saturday afternoon, making for a heart-stopping start to both side’s seasons. The Magpies established a handy two-goal buffer at half time and extended it a touch further heading into the final break to put themselves in the box seat. Matilda Zander looked to have wrapped up the result with her goal early in the final term, but the Cats made Collingwood earn the 7.2 (44) to 6.6 (42) win, kicking the last three goals to move agonisingly close to a huge comeback. Geelong’s AFLW influence shone through as top flight Cats kicked each of their goals, led by first year tall Olivia Barber (three). Another tall, Rene Caris was also terrific, while Paige Sheppard made a successful return to high-level football in the hoops. Imogen Barnett was Collingwood’s best with four goals and was supported well by South Australian recruit Zander and AFLW-listed utility Maddie Shevlin was also impactful.

Casey was made to break away twice, but managed to get the job done comfortably against Carlton with a 36-point win at Princes Park on Saturday. A tense deadlock gripped the opening term before things began to open up, and Casey got away to a two-goal lead. Carlton hit back in the third term after a scoreless half, but fell back behind just as quickly as the visitors prettied up their side of the scoreboard. Melbourne-listed forward Brenna Tarrant was terrific in the important moments, finishing with five goals as the best player afield. Maggie Caris and Imogen Milford showed some of their raw ability, while skipper Samantha Johnson was strong in midfield and Kelly Thompson also fared well. Winnie Laing won a heap of ball from the wing for Carlton, while leaders Jen Lew and Ally Bild were solid in defence. New Blue Paige Trudgeon also impressed in bursts, booting two goals in the losing effort.

Western Bulldogs kicked away after half time to a comfortable 42-point victory over Hawthorn, providing pleasing viewing for home fans at Whitten Oval on Sunday morning. Having built a steady two-goal buffer, the young pups kept Hawthorn goalless after half time while piling on six goals up the other end to achieve a resounding 11.6 (72) to 3.6 (30) result. A strong AFLW-listed contingent helped the Bulldogs hold sway, with midfielder-forward Britney Gutknecht best afield and the leading goalkicker with two majors. Fellow goalkicker Amelia can Oosterwijck found a good amount of ball, while skipper Riley Christgoergl was prominent in midfield and Dogs signing Annabel Strahan impressed. Jemma Owen was the Hawks’ standout figure, with Abbey Holmes‘ experience helping their cause and captain Jess Trend proving influential before coming off with injury.

Southern Saints put in the work early to set up an 18-point win over Essendon at The Hangar on Sunday morning, making for an ideal start to the Saints’ campaign. After a tight opening term, the Saints broke away to a five-goal lead at the main break, but were slowly pegged back in the third term as Essendon threatened to pounce. In the end, Southern had put enough on the board to hold out for a 7.5 (47) to 4.5 (29) victory. St Kilda-listed newcomer Jess Matin was outstanding with three goals and plenty of work going both ways, as teammate Poppy Kelly dominated the hitouts. Hannah Stuart was another among the Saints’ best, with Valerie Moreau (two goals) also in the action. In a losing effort, Essendon vice-captain Courtney Ugle was judged her side’s best player, while another mainstay in Cecilia McIntosh also impacted, finding the big sticks alongside Alana Barba and Alexandra Quigley.

Williamstown came out on top in a low-scoring slog between two standalone sides, holding on to beat Darebin by two points at La Trobe University on Sunday. Down by the same margin at the first two breaks, the Seagulls broke ahead in term three and somehow managed to defend their lead thereafter despite some immense pressure from the Falcons. The 2.5 (17) to 1.9 (15) scoreline was indicative of both team’s lack of polish inside 50, but also testament to their structures and defensive acumen. Dynamic midfielder-forward Megan Williamson was among the Seagulls’ best, finding the scoreboard alongside Ruby Tripodi. Leader Erin Meade was also instrumental, and Lana King showed some promise on debut. For Darebin, Sidney Cubasch was named best while Kathleen Roe was reliable as ever from defence, and Hayley Munro proved dangerous as she rotated forward from the ruck.