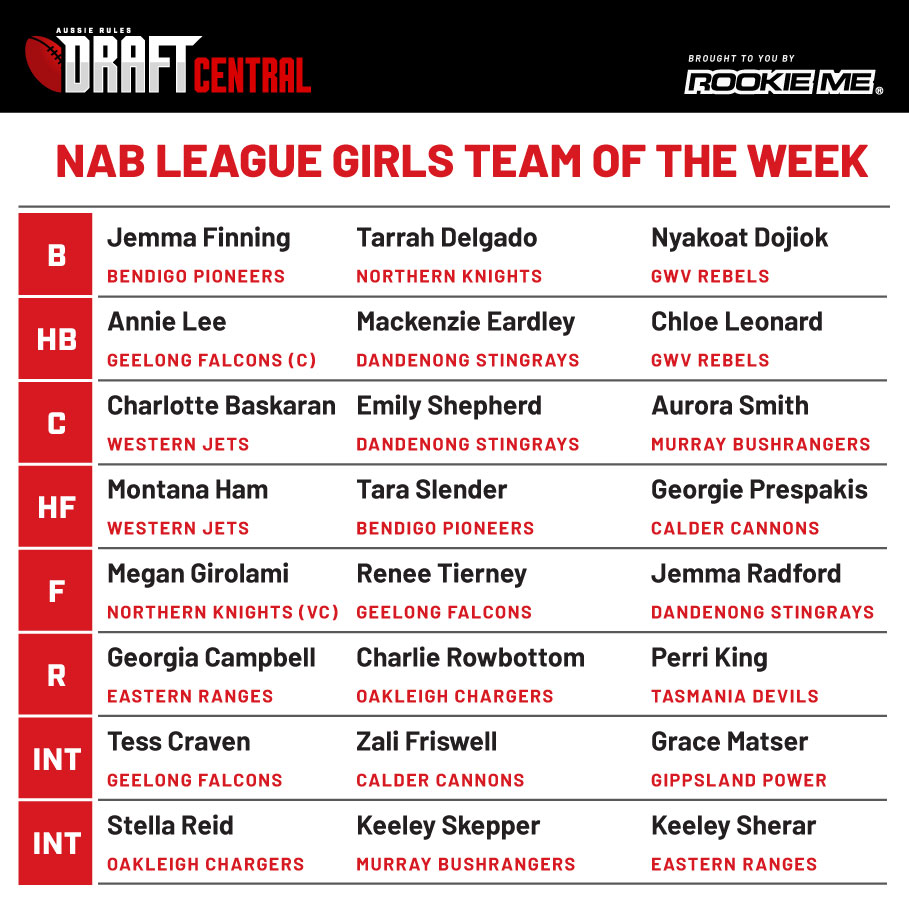 DANDENONG Stingrays and Geelong Falcons have picked up a Round 4 competition-high three players in the Draft Central NAB League Girls Team of the Week, in the most difficult week to split players across the board thus far. Every team had a representative, with the evenness between the last 26 so even that we opted for a fourth emergency. Whilst the Stingrays and Falcons had three players each, eight other sides had two representatives a piece, with so many close games, while Gippsland Power and Tasmania Devils had one representative for various reasons.

Dandenong Stingrays’ big win over Greater Western Victoria (GWV) Rebels saw them cover each of the three areas on the field, with one defender, midfielder and forward in the Team of the Week. Heading up centre half-back – though she also played forward – is bottom-ager Mackenzie Eardley, who is joined by midfielder Emily Shepherd – for the second time – as well as forward, Jemma Radford. Another talented bottom-ager in Amber Clarke was close to making it but just missed out and was named as one of the emergencies. Despite the 10-goal deficit, the Rebels had two standout players on the day, with Nyakoat Dojiok and Chloe Leonard making the back six.

Geelong Falcons had another trio of players after their third straight win, with Annie Lee making a third straight team and becoming only one of four players to make the team every week thus far. As Draft Central Player of the Week, Lee will captain the hypothetical side. Other Falcons in the team are returning Team of the Week members, Renee Tierney at full-forward, and Tess Craven coming off the bench. Their opponents Eastern Ranges saw ruck Georgia Campbell making the team again, with Keeley Sherar named on the bench as well.

The vice-captain of the team went to Player of the Week runner-up Megan Girolami who slotted six goals up forward for the Northern Knights in their big win over Gippsland Power. She was joined in the team alongside full-back Tarrah Delgado, with an even team performance meaning the likes of Trinity Mills (emergency) were unlucky to miss out. Gippsland Power ruck Grace Matser was the most impressive performer from the losing side, and will come off the bench to team up with Campbell through the ruck.

Calder Cannons and Bendigo Pioneers had a thrilling contest up at Epsom Huntly Reserve, with Georgie Prespakis making her third straight Team of the Week, named on the half-forward flank. Fellow Cannons midfielder Zali Friswell enters the team this week, while from the Pioneers, Tara Slender played a bit of everywhere and will suit up at centre half-forward this week, while Jemma Finning was named in a back pocket for her efforts despite the loss. Another tight encounter between Oakleigh Chargers and Tasmania Devils saw the Chargers’ duo of Charlie Rowbottom and Stella Reid make the team for a third straight week, while Perri King joined Rowbottom in the starting midfield. Ella Maurer (emergency) was very close to making the side and was nominated as one of the next best from her impressive performance on the weekend in what was an even Devils performance.

Up in Wangaratta, the usual suspects in Aurora Smith and Keeley Skepper impressed once again for Murray Bushrangers. While the Bushrangers lost, Smith again slotted onto a wing, while Skepper made the bench with both players entering the team for the second time in three games. For the Western Jets, Charlotte Baskaran and Montana Ham both made it in on the wing and half-forward, with Kensley Ward so close we created a fourth emergency spot given her two goals and five tackles on debut.

DRAFT CENTRAL NAB LEAGUE GIRLS TEAM OF THE WEEK: ROUND 4