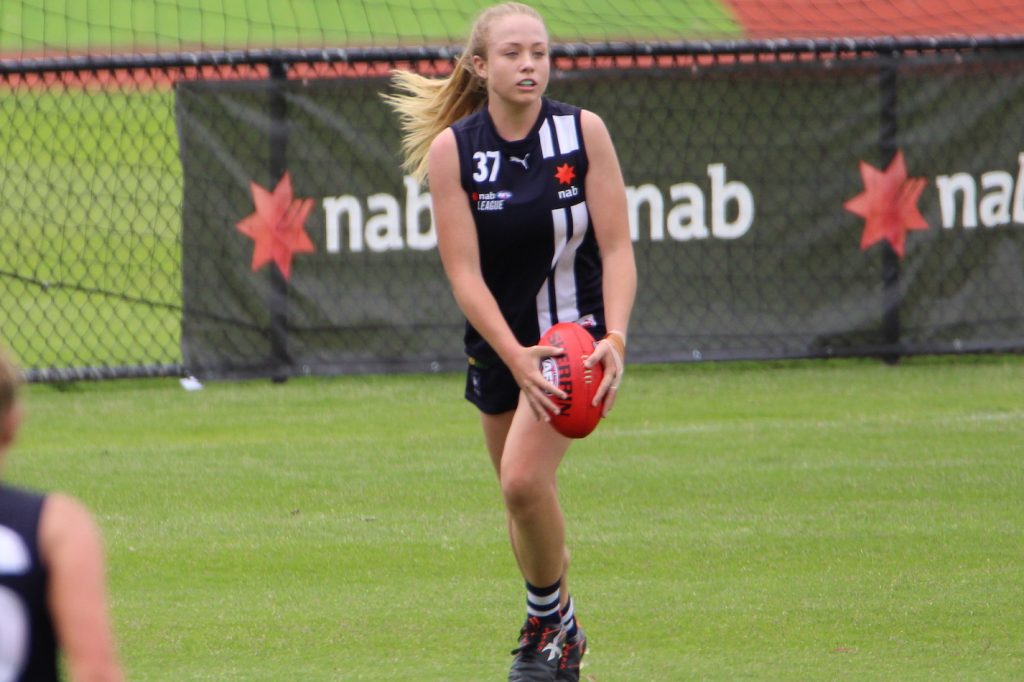 GEELONG Falcons’ Annie Lee has been one of the most consistent performers this season, and was rewarded with the Draft Central NAB League Girls Player of the Week Award for Round 4 for another outstanding effort in defence. Lee was voted in as the Player of the Week over Northern Knights’ Megan Girolami who was equally as impressive up the opposite end of the field in her game, with six goals. Lee becomes the first draft-eligible player to win the Player of the Week Award this season, after 2004-born talents Charlotte Baskaran and Emily Shepherd won the first two weeks.

Lee picked up a game-high 22 disposals in Geelong’s hard-fought win over Eastern Ranges in what was an even team effort. However it was her 10 rebounds – her side only finished with 27 total and the opposition 20 – that really stood out in the victory. Of her 22 disposals, Lee had 19 kicks, as well as clunking eight marks and two tackles. What makes her such an impressive performer is the fact that she is so well balanced and is equally as dangerous in the air as she is at ground level, particularly the fact she can compete against opponents taller than her 169cm height.

In her three games this season, Lee has averaged 18.3 disposals, 6.3 marks, 4.3 tackles and 6.3 rebounds, with a consistent kicking efficiency and four-quarter effort. Often being that extra player in defence, Lee can just as easily be the third person at a contest, or go one-on-one and bring the ball to ground, and is a teammate that Falcons look to get the ball in the hands of when transitioning from defence to offence.

The Geelong Falcons are undefeated at present, having won their three games thus far in season 2021. Whilst they fought past Eastern Ranges on the weekend, they also collected the scalps of Greater Western Victoria (GWV) Rebels and Bendigo Pioneers in the opening couple of rounds that were played.

GEELONG FALCONS AT THE COMBINE INTERVIEWS: