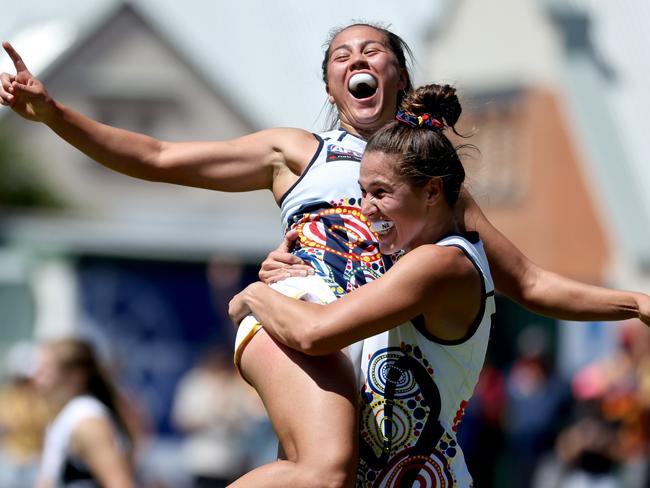 ADELAIDE has moved into fourth position on the AFLW ladder with a 53-point drubbing of St Kilda at Norwood Oval on Sunday afternoon. In what was arguably the Crows’ most complete team performance of the season to date, they had contributors all across the ground and dominated the inside 50s (47-8), contested possessions (110-80) and centre clearances (7-4).

Najwa Allen was a standout for the home side, providing plenty of drive off half-back and halting many of St Kilda’s forward thrusts. Ebony Marinoff (23 disposals, nine tackles) and Anne Hatchard (15 disposals, four marks) were powerful at the stoppages, while superstar Erin Phillips (21 disposals, five marks, one goal) showed her usual class in the midfield and up forward. Georgia Patrikios (24 disposals, three marks, three tackles) was exceptional all day for the visitors.

It was a hot footy early, as both sides applied strong tackling pressure and did not allow the other any space. St Kilda defender Bianca Jakobsson was fantastic in the opening term, as she repelled several of Adelaide’s attacks and showed poise with ball in hand. Kate Shierlaw was prominent early as well, but the Saints struggled to get the ball into their forward 50. Chloe Scheer was busy at the stoppages for the Crows, as was Marinoff, who had four tackles in the first quarter alone. Less than 30 seconds before the quarter-time siren, Phillips earned a free kick for a high tackle and kicked the Crows’ first to give them a nine-point lead.

While St Kilda’s pressure dropped off after the first break, Adelaide’s forward 50 pressure increased to new heights. This meant that they were creating many opportunities, with Randall eventually capitalising and kicking the Crows’ second with a nice snap. Soon after, number four pick Teah Charlton shrugged off a tackle and kicked her maiden AFLW goal. Charlton kicked her second just minutes later, proving once again how comfortable she is competing at AFLW level in just her fifth match. Defenders Lisa Whiteley and Sarah Allan continued to be brick walls for Adelaide at half-back, while Eloise Jones and Justine Mules supported them by providing some outstanding run and carry down the wings. Nadia von Bertouch laid a brilliant tackle on Caitlin Gould to save a certain goal, as Adelaide’s lead stayed at 30 points going into the main break. At half time, the Crows led the inside 50 count 29 to 2.

Adelaide’s pressure continued to be too much for the Saints in the third term, especially when they were exiting the defensive 50. Danielle Ponter kicked her first for the day after earning a free kick 15 metres out from goal, then Ashleigh Woodland extended the Crows’ lead with a nice checkside from the pocket. This was Woodland’s fifth goal for the season, a fantastic start to her career in Crows colours. Shierlaw gave Saints fans something to cheer about at the end of the term when she got on the end of some nice ball movement from Patrikios and kicked St Kilda’s first goal for the day.

Ex-Saint Jess Sedunary rubbed some salt in the wound at the start of the last when she kicked truly from a set shot. Despite this, St Kilda played much better in the final term. They started to control the ball well and were much more effective by foot, finding gaps in Adelaide’s zone as they chipped the ball around. The problem was that, outside of Patrikios, the Saints could not facilitate much attacking play through the middle of the ground. In her 32nd AFLW game, Mules made Adelaide fans even happier when she took a contested mark and kicked her first ever AFLW goal from a set shot on a tight angle. From there, St Kilda created some chances but could not kick straight in front of goal. The Crows ran out comfortable winners.

In Round 6, Adelaide will plan on making it three straight wins when they take on the winless Gold Coast at Norwood Oval on Saturday afternoon. Meanwhile, St Kilda will come up against Melbourne in what should be a fascinating clash at Casey Fields on Saturday night.

Collingwood showcased their development in a huge clash against Melbourne, which was ultimately do or die for the red and blue side needing to prove they were capable of holding up under pressure. The Pies well and truly got their revenge on the Demons at Victoria Park, running down Melbourne for an excellent 35-point win 7.7 (49) to 1.8 (14). With this win on the board and given Fremantle’s loss on Saturday, the Magpies remain the only undefeated side on the ladder with five straight on the board.

It was the Chloe Molloy and Bri Davey show as the hot Pies ran down the inaccurate Dees, taking advantage of the young side’s slump in form and punishing Melbourne for its inability to put pressure on the scoreboard. Whilst a slow start from both sides set the scene, it was a huge second quarter that not only put Collingwood on the map, but also on the right path as Melbourne struggled to contain the Magpies’ engine room. Molloy’s work rate and ability to find the scoreboard was punishing for the Dees, who defensively could not compete despite continuous efforts from the usually impenetrable Libby Birch and Daisy Pearce. Molloy finished with three goals and partnered well with Davey who booted two of her own to go with a match-high 25 disposals, and whilst Melbourne certainly had its chances – most remarkably in the third, when the Dees lifted but could only manage 1.4 despite dominating possession and momentum – it was not enough as the Magpies commanded control in another three-goal quarter to finish the match.

Despite sitting out the remainder of the match after a hit to the shoulder in the final quarter, Molloy’s influence could not be quelled as she head to be a three-way equal-leader on the goalkicking leaderboard for the season with nine majors to her name. Britt Bonnici and Jaimee Lambert also proved to be ball magnets in the tough contest with 23 and 21 touches respectively, whilst Melbourne’s Tyla Hanks continued her terrific form with a 22 disposal, six mark and six tackle effort. Lauren Pearce was the lone goalkicker for Melbourne and also nabbed 15 touches, whilst Karen Paxman was kept relatively quiet with 19 touches, and Kate Hore (17 touches), Maddi Gay (12) and Alyssa Bannan were amongst those who failed to hit the scoreboard with two behinds apiece. Collingwood’s Jordan Membrey unfortunately went down with a knee injury, seeing her season in doubt. The Magpies will host fellow in-form side Western Bulldogs next round once more at Victoria Park, whilst Melbourne host St Kilda on Saturday evening.

The last match of Round 5 saw the West Coast Eagles pile on the pressure in a tight contest with Gold Coast, gaining ascendancy early and fighting to remain ahead in the 5.4 (34) to 4.9 (33) victory. This win registered the Eagles’ first for the season, and whilst this encounter was bound to see one of the winless sides put points on the board, both teams were tested in a highly offensive contest.

A three goal first quarter from the Eagles well and truly got the ball rolling, but Gold Coast proved they were capable of standing up to the onslaught with an improved second term to limit West Coast’s chances and apply their own forward pressure, rewarded with a goal to go into the second half trailing by eight points and well within their chances. Second year Eagles talent Mikayla Bowen was everywhere throughout the contest, taking the game on and drawing Maddy Collier and Emma Swanson into the fray as the trio piled on the pressure through midfield. Defensively, Lauren Ahrens proved once more how dangerous she can be with 19 touches, five marks and three rebounds, limiting the Eagles from finding avenues to goal after the first quarter as Alison Drennan (14 disposals, 11 tackles) and Jamie Stanton (14 touches, six tackles and 1.3) also switched on across the ground following the first quarter barrage from the Eagles.

Whilst the Suns showed some really good signs, hunting the footy and propelling the ball forward consistently – finishing with 34 inside 50s to the Eagles’ 20 – they were ultimately unable to capitalise under pressure. Sarah Perkins and Kalinda Howarth piled on second half goals for the Suns but it was to no avail, and while Stanton’s snap in the last minutes of the match could have spelled trouble for the Eagles, it was not to be as the Eagles ran out one-point winners in tight circumstances.

Next round, Gold Coast will continue on the road for a fifth straight match when they look to upset Adelaide on Saturday afternoon, whilst the Eagles will take on Fremantle for the second time this season on Sunday.