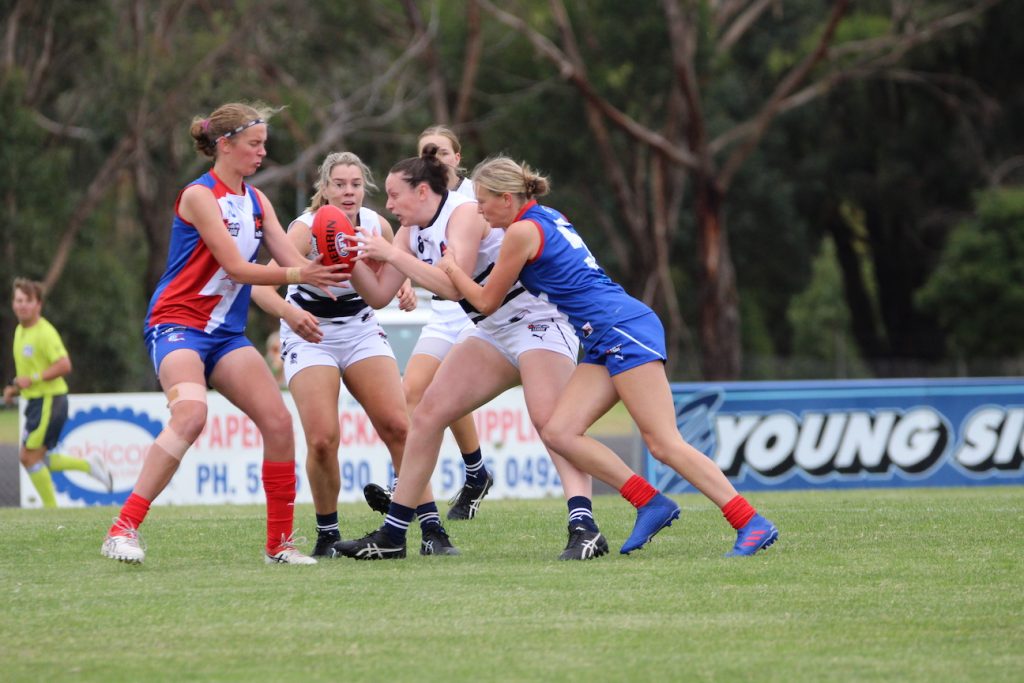 ROUND 4 of the 2021 NAB League Girls season saw Oakleigh and Geelong keep their perfect records in tact, handing Tasmania and Eastern their first losses respectively. Calder joined the Chargers in surviving a scare, while Northern, Western, and Dandenong all registered comprehensive wins. Catch up on all the action and find out which players stood out in our weekend wrap.

Geelong Falcons remained in the ranks of the undefeated on Saturday, when they outlasted the Eastern Ranges to win by 24 points at Kilsyth Recreation Reserve. The Falcons led at every break but Eastern remained within striking distance during the first half, before Geelong made better of its chances with four goals to one after half time to run home 7.5 (47) to 3.5 (23) victors.

Geelong’s Annie Lee put in a blinding performance from defence, collecting 22 disposals, eight marks, and 10 rebound 50s as a deserving Draft Central Player of the Week nominee. Tess Craven and Charlotte Simpson were also among those to find plenty of the ball, while Renee Tierney continued her scoring form up forward (two goals) and Ash Van Loon set the tone with a whopping 15 tackles.

For the second week running, Eastern tall Georgia Campbell booted multiple goals (two) and registered over 20 hitouts in the ruck, proving a difficult figure to halt. Olivia Meagher was again her side’s top ball winner, while the likes of Keeley Sherar, Cadhla Schmidli, and Ruby O’Dwyer also contributed well in the Ranges’ first loss for 2021.

Both sides will enjoy bye rounds this week, with Geelong’s next assignment coming against the Sydney Swans Academy on March 13, while Eastern returns on the following day against Gold Coast’s academy.

Northern Knights have gone back-to-back in the 2021 NAB League Girls competition, posting a comprehensive 12-goal win over Gippsland Power at Morwell East on Saturday. The Knights could not miss in the first half, as they piled on nine goals straight to lead by 45 points at the main break. Megan Girolami was the key architect up forward with four first half goals, whilst Grace Matser was the sole goalkicker for the Power. The Knights control continued after half-time, though Gippsland was able to restrict the scoring, keeping the visitors to 4.4 in the second half, as the Knights were still able to pick up a 13.4 (82) to 1.4 (10) victory.

Girolami finished with half a dozen goals in a superb effort for the Knights, while Trinity Mills (three) and Simone Mooney (two) also snagged multiple majors. Maeve Chaplin kicked a crucial goal in the opening term, but did not see out the match, copping a knock and being put on ice for the entire second half, and fair chunks of the first half. Tarrah Delgado was once again instrumental in defence, whilst Brooke Plummer and Ava Jordan won plenty of the ball, as did Tallia Pulcino and Phoebe Nelson.

For the Power, Matser was the clear standout with a big effort not only in the ruck, but around the ground and to kick that second quarter set shot goal. Grace McRae put in another hard-working performance, while Yasmin Duursma, Indiana Makai and Macie Gilmour were among their team’s top ball winners. Lily-Rose Williamson caught the eye with her drive out of defence and was arguably second best behind Matser on the team, while Alisha Molesworth also had some impressive moments.

Next round, Northern Knights will take on Calder Cannons in a repeat of the Round 2 match which did not go ahead, whilst Gippsland Power head back to Morwell East where they host Sandringham Dragons.

Western Jets powered to a 40-point win over the Murray Bushrangers at Wangaratta on Saturday, saluting for their first win of season 2021. The Jets led at every break and overwhelmed their opponents forward of centre, eventually breaking down the dam walls with five goals to one in the second half. While Western celebrates a breakthrough victory, the Bushies remain winless after the 8.9 (57) to 2.5 (17) result on home turf, one of three sides without points so far.

16-year-old Jets debutant Kensley Ward made a splash with two goals, including the first of the game to put her side on the front foot. Annie Gray also found the big sticks twice to round out the game’s multiple goalkickers. Charlotte Baskaran again took hold of the contest in a damaging performance, getting on the scoreboard late while the likes of Montana Ham, Caitlin Sargent, and Ciara Singleton also played key roles in the win.

Murray did not quite have enough to match Western’s firepower and strength through the middle, but had some strong contributors. Aurora Smith was the Bushies’ leading ball winner and continued her promising start to the season, while Keeley Skepper and Chloe Locke were also productive throughout. Mindy Quade was another to stand up, booting one of her side’s two goals while Molly Kennedy got her hands dirty with 10 tackles and Grace Hay was busy down back.

After a bye, Murray’s next assignment will come against the GWS GIANTS Academy, while Western is set to catch up on its Round 2 fixture against Tasmania on Monday morning.

Calder Cannons managed to claw back a 16-point deficit with a four-goal final quarter to put away the Bendigo Pioneers at Epsom Huntly Recreation Reserve. The first half was played entirely on Bendigo’s terms, dominating the key midfield battle and showing strength in defence when Calder did get on the attack. After what must have been an inspiring half time speech, the Cannons came out with a newfound intensity, which eventually was too much for the Pioneers and resulted in the nine-point win.

AFLW Academy member Tara Slender was prolific in her return from concussion, leading the disposal and marks count for the game, whilst Georgie Prespakis still found plenty of it despite being thrown into a bunch of different positions all day. Jemma Finning, Elizabeth Snell and Jayda Richardson were the next best in disposal count, with Richardson being particularly damaging and getting herself a goal. Zali Friswell and Emelia Yassir each won a bit for Calder as well. Neve Crowely was strong in defence for the Cannons, with Octavia Di Donato and Tegan Williams holding strong in the Pioneers’ backline

The Cannons will be playing their postponed Round 2 fixture against the Northern Knights at Highgate Recreation Reserve this coming Thursday Night, with the Pioneers taking on Tasmania two days later at Arden Street Oval.

Oakleigh Chargers remain undefeated after prevailing by six points in a tight and thrilling contest, overcoming a gallant performance from the Tasmanian Devils. The Chargers got on top early by locking the ball inside their forward 50, but failed to convert their opportunities. The Devils flipped the script from midway through the first term though, playing a more aggressive and pressure-based game style that ultimately saw them take a five-point lead into half-time.

Tasmania was arguably the more dominant side in the second half with its unrelenting tackling and pressure, but Oakleigh’s class came to the fore in the latter half of the third term with two quick goals, which ultimately proved to be the difference in the game. The final margin represents a 96-point turnaround from when the two sides last met just over 12 months ago, when Oakleigh kept Tasmania goalless in a 102-point thrashing.

Charlie Rowbottom held sway around stoppages and made an impact when she went up forward in the third quarter. Amanda Ling and Stella Reid backed her up with important performances in the midfield. Holly Kenealy made the most of her opportunities by kicking over half her side’s goals, while Brooke Vickers and Mia Clift held firm down back under constant pressure in the second half.

Perri King’s ball use and timing stood out in such a congested contest, driving the Devils’ performance after half-time. Ella Maurer, Claire Ransom and Meghan Gaffney were also strong through the middle against Oakleigh’s star-studded engine room. Jemma Blair impressed with her rebounding off half-back and the wall she set-up at the top of forward 50, while Georgia Clark turned the game early on with two goals in under a minute.

The Dandenong Stingrays made their intentions clear to the rest of the competition with a comprehensive 10-goal win against the GWV Rebels at MARS Stadium on Sunday afternoon. The Rebels managed to keep it close to quarter time, but the Stingrays ran away with it after that, kicking 11 goals straight to the Rebels’ 1.2 for the remainder of the game, in an impressive display of accuracy.

Dandenong 2022-eligible draft prospects Emily Shepherd and Mackenzie Eardley were superb in the victory, having a massive impact around the ground and showing why they are two to watch for the future. Jemma Radford and Ashleigh Richards were the focal points in attack for Dandenong, kicking three goals each. The Rebels would be pleased with the efforts of Chloe Leonard and Nyakoat Dojiok out of the backline, who did all they could to repel Dandenong’s constant attacks.

Dandenong’s next game will be a top four clash against the Oakleigh Chargers on Friday night at Bluescope Recreation Reserve, whilst the Rebels will come up against Bendigo Pioneers on Wednesday March 10 at Epsom Huntly Recreation Reserve.