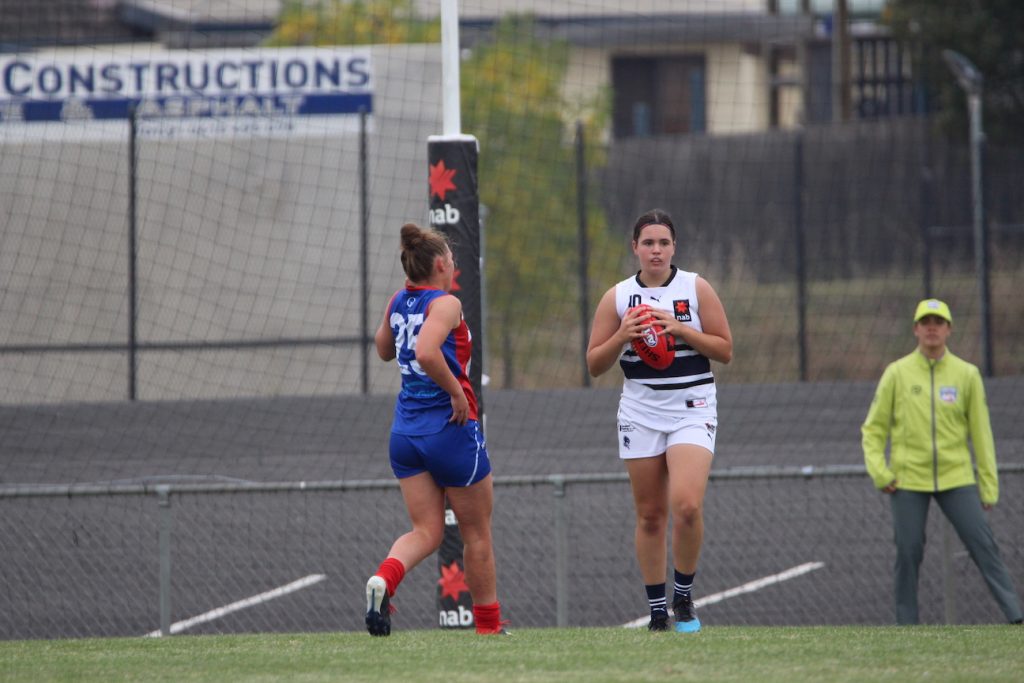 THE NAB League Girls competition continues to go from strength to strength, with the six entertaining games on the weekend throwing up another mixed bag of results and plenty of memorable moments. In continuing our new weekly series, we take a look at the top moments from each match – whether they be game-defining feats, big marks, glorious goals, or otherwise. There was plenty of eye-catching action in Round 4 as the best Victorian girls churned out another batch of impressive feats.

Leaders guide the way in second half

When Geelong Falcons had a slight advantage but needed to kick away in the second half against a persistent Eastern Ranges at Kilsyth Recreation Reserve, the visitors needed someone to stand up. Who better to look to than your captain, and your leading goalkicker? The twin towers in leader, Lucy Were and leading goalkicker and 2018 premiership player Renee Tierney both booted two goals in the second half. They were the four goals for the Falcons in the third and fourth quarters, with Eastern Ranges only kicking the one in that time. With Annie Lee patrolling the defence, it was the duo’s ability to hit the scoreboard multiple times that got them home.

It is hard to look past the six goals of Megan Girolami when talking about memorable moments from Northern Knights’ win over Gippsland Power. The Knights bottom-ager booted half a dozen majors – including four goals to half-time – to be the key target inside 50. The Knights shared the goals around, but Girolami was a dead-eye, kicking them from set shots and in general play, proving to be quite the handful for her opponents and entire opposition defence. After three goals the week before, Girolami stepped up and made her chances count, and recorded the highest individual goals this season comfortably (previous record in 2021 was four).

Ward arrives at the double

It is scary to think about just how good the upcoming generation of talent will be, especially when players eligible for the 2023 AFLW draft are having such a profound impact on the NAB League already. 16-year-old Western Jets prospect Kensley Ward is the latest 2005-birth to put her name in lights, returning a promising debut in the Jets’ big win over Murray. She started off in style with the game’s first goal, before going on to have another three scoring shots. One went through for a major, and it was a ripper at that as Ward snapped home over her shoulder in the final term to put the cherry on top of a fine second half.

Maddy stamps her mark on the game

Bendigo Pioneers might not have been able to hold on and inflict a massive upset over Calder, but played some terrific football to put themselves in the box seat at three quarter time. A moment which helped the Pioneers break away in term two came via some Madeline Marks brilliance up forward. Jayda Richardson had put the Pios ahead and had another chance on goal, but saw her set shot hold up in the wind. Cue Marks, who pushed past multiple opponents and clunked a strong contested mark before extending her side’s advantage to 10 points heading into half time. Game-breaking stuff.

Rowbottom leads the charge up forward

Oakleigh escaped Tasmania with a full set of premiership points after its enthralling meeting with the Devils, seeing the Victorian region remain undefeated in 2021. Down at half time, the Chargers would need to lean on individual brilliance from some of their stars to help turn the result around – cue Charlie Rowbottom‘s move forward. The 18-year-old had previously held sway at the stoppages, but made her mark inside 50 during the third term with what would end up being the winning goal, and a handy point. It is that kind of dynamism which has Rowbottom pegged as a top five prospect in this year’s draft, she’s a star.

Dandenong enjoyed a big win over the Greater Western Victoria (GWV) Rebels on Sunday, with some terrific team feats helping set up the Stingrays’ 12.2 (74) total. One particularly memorable major came in the second term, as Ashleigh Richards booted her third goal for the half. The 17-year-old laid a tackled deep inside forward 50, before Emily Shepherd cleaned up the scraps, stepped around two GWV players and threaded through a handball back to Richards to finish the job. Dandenong would then close out the game with eight of the next nine goals.