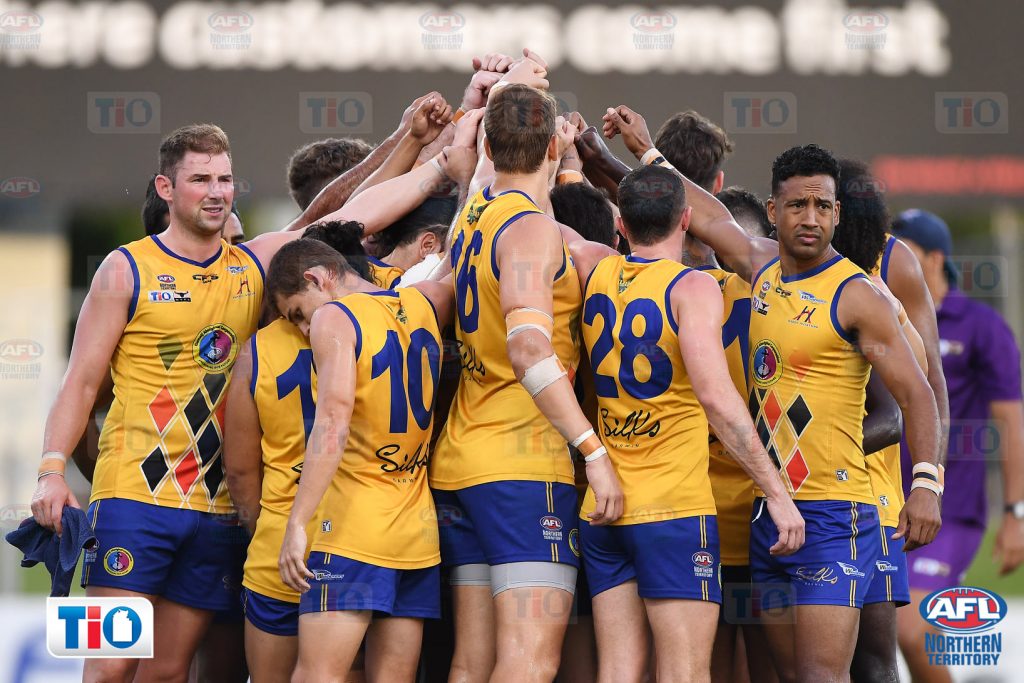 WEEK one of the 2020/21 Northern Territory Football League (NTFL) Men’s Premier League finals series was run and won on the weekend, with Waratah and Wanderers picking up wins in their respective match-ups. The Warriors disposed of Darwin in an elimination bout, while Wanderers shocked St Mary’s under lights, though both sides move onto the semi final round. That, and more in our weekend wrap.

Waratah outmuscled Darwin on Saturday evening to enter week two of finals, coming up trumps to the tune of 26 points at TIO Stadium. The Warriors excelled at the coalface with dominant ball winners and gave Darwin plenty of headaches with their tall timber in attack, but did arguably their best work down back to keep the dangerous Double Blues at bay. With a four-quarter team performance, Tahs ran out 13.6 (84) to 9.4 (58) winners and will face St Mary’s in next week’s semi final.

The tall duo of Zach Westerberg and Arnold Kirby did well to provide first use to the likes of Robert Turnbull and Abe Ankers in midfield, with the latter three also hitting the scoreboard. Will Collis made his chances count with three majors, which was an equal game-high feat alongside Darwin spearhead Brodie Foster. Jarrod Stokes provided plenty of dash from midfield for the Buffs, while Timothy Eldridge was reliable as ever and Cade Abala snared two majors to highlight his contribution.

Wanderers stunned St Mary’s on Saturday night with a 20-point qualifying final victory at TIO Stadium, just a week removed from the Saint’s 79-point triumph in the final home-and-away round. In what was a 99-point turnaround from that Round 18 meeting, Wanderers did most of the damage before half time, booting nine of their 13 majors and setting up an unassailable lead. An inaccurate St Mary’s did not have enough to match the Muk Muks’ firepower, resulting in the 13.8 (86) to 8.18 (66) scoreline.

The forward partnership of Brett Eddy (six goals) and Simon Bates (three) proved lethal for Wanderers, serving as a massive benefactor of creative and extractive excellence from Shaun Mannagh and Dane McFarlane in midfield. Down back, Brodie Newman and Braedon McLean cut off plenty and provided good drive on the rebound. Shaun Edwards (three goals) was one of St Mary’s shining lights with his spark on the uptake, while Jack Landt was also superb in the loss as his side’s other multiple goalkicker. The Saints will lean on their double chance and face Waratah next week, while Wanderers takes on rested minor premier, Nightcliff in the semi finals.