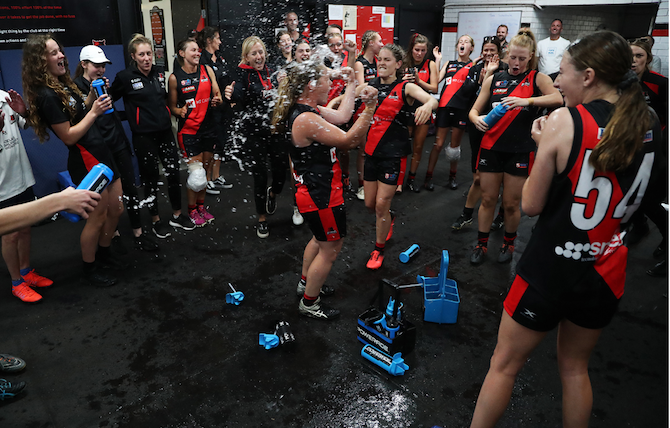 WEST Adelaide is gearing up for a bumper 2021 South Australian National Football League Women’s (SANFLW) season, boasting an abundance of talented young prospects, and a side that showed it could match it with the best teams in the competition. Taking down experienced finals campaigner Norwood in the elimination final before bowing out at the hands of reigning back-to-back premier South Adelaide in the preliminary final, there was plenty to like about the Bloods’ season.

Ball magnet Rachelle Martin shared the SANFLW League Best and Fairest Award with North Adelaide’s Anne Hatchard, showing she was just too good to be at state league level. The Adelaide Crows agreed, and drafted Martin onto their senior list after being a train-on player and getting a game when injuries struck the Crows 12 months ago. It means Martin’s availability for West Adelaide will be dependent on AFL Women’s selection, but she, like her sister Hannah Button, are natural footballers with high work rates.

The Bloods will also be without the likes of Madison Newman and Chelsea Biddell when the Crows are playing, with the two continuing to impress at the elite level. Newman formed a deadly combination with bottom-ager and 2022 draft prospect Keeley Kustermann off half-back, with the pair both making the SANFL Women’s Team of the Year there. Kustermann was able to gain plenty of experience against senior bodies in 2020, and she will be one to watch not only in the SANFL Women’s competition, but at the AFL Women’s Under-19 Championships in April. Her balance, composure and skill by foot is impressive, and expect her to play an important role for West Adelaide.

Kustermann is not the only young talent on West Adelaide’s list, with Zoe Venning one of the highly touted draft-eligible players on the list. A hard nut who shows great courage around the ball, Venning can play as a lead-up forward, a high-forward or predominantly as an inside midfielder where she can crack in, win the ball and exit the stoppage with fair athleticism to match her contested ball-winning abilities. Speaking to Draft Central in the pre-season, Venning said she was hoping to improve her skills to take her game to the next level.

Unfortunately some of West’s talented teenagers have also been sidelined during the pre-season, with Abby Hardwick (quad) and Abbie Ballard (ankle) both looking at time out of football. Hardwick is eyeing off a return sooner rather than later being a strain, while Ballard will miss a large chunk of the season – unfortunately including the championships – but will no doubt be a vital inclusion later in the season. Other members in the South Australian State Academy squad are Tamika May – a developing football talent – and Scarlett Griffiths – an athletic marking forward – who are also looking to impress in 2021.

Fast forward to a couple of years down the track and 15-year-old Lauren Young is a player whose name will no doubt keep popping up, with the teenager set to play a big role in her debut season this year as a versatile key position option. Speaking of key position options, Carlton’s Sharni Whiting has crossed to the SANFLW to be a contested marking replacement for retired duo Lauren Rodato and Helen Maidment. Whiting has great experience and will be one of the more notable key position players in the competition.

Louella McCarthy has also crossed from the Southern Saints, with former Woodville-West Torrens Eagles young gun Teagan Usher a perfect replacement for Newman whilst she is out with AFL Women’s commitments. Norwood duo, Taylor Glover and Chloe Meyers, South Adelaide’s Natalie Gibbs and Sturt’s Paxton Davis-Mattner are among the other inclusions to the Bloods side with state league experience.

West Adelaide kicks off its 2021 SANFL Women’s season tomorrow night at Coopers Stadium against Norwood from 7.45pm. The Bloods are an exciting team with plenty of youth, so expect there to be eye-catching moments galore.