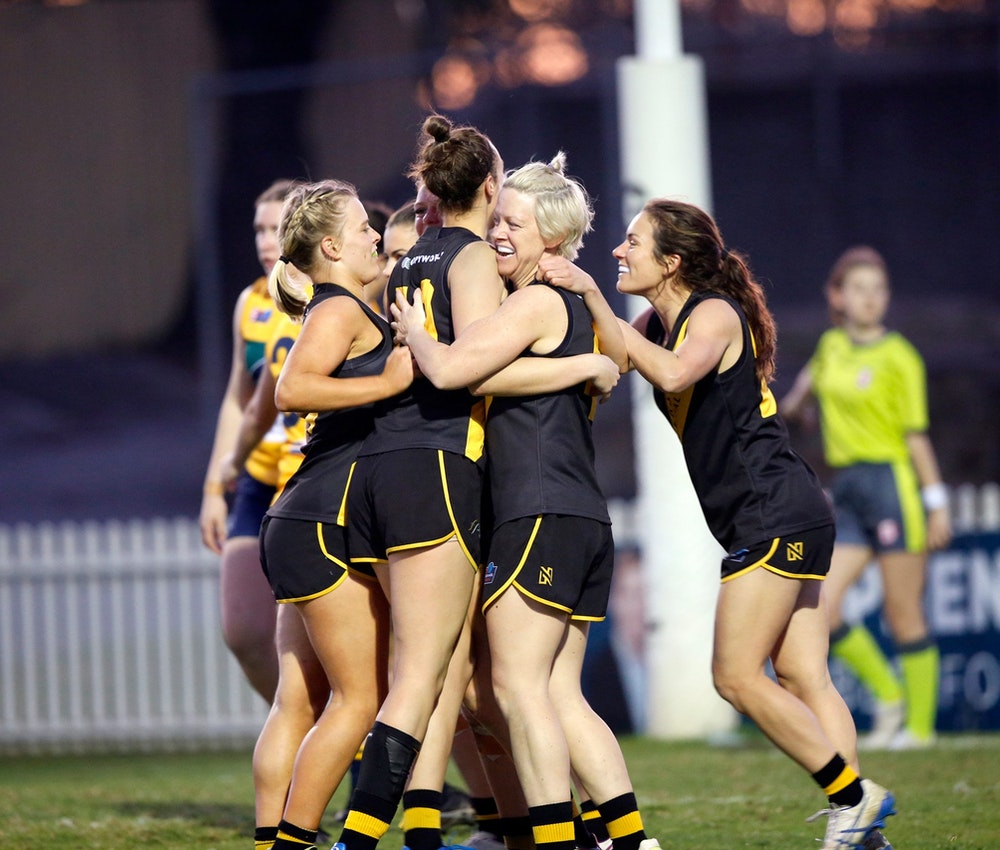 THE 2021 South Australian National Football League (SANFL) Women’s season is upon us and Glenelg is gearing up for an improved season with a more experienced squad stepping up to the plate this season. Whilst brief COVID-19 shutdowns affected the early stage of preseason, women’s head coach Jason Fairall is happy with how his team is shaping up.

“We’ve had a fairly strong preseason, two weeks affected by a COVID shutdown but outside of that we’ve actually had an extended preseason given the season starts later so it really hasn’t impacted our preseason at all,” Fairall said. “Nothing really that was as significant as last season where it (COVID) stopped the season, effectively all it meant was we missed our first two weeks of the preseason and so outside of that it’s just been situation normal.

“Majority of our players have actually gotten through the preseason this year, which was a first for us. “Normally we’re managing players at various stages but it’s been fairly consistent and fairly solid so preseason’s been strong.”

Whilst Glenelg has dealt with a significant turnover of players over the past few years after an overhaul of its women’s football program, Fairall is confident in the club’s newcomers this season with a more cohesive and consistent playing group.

“A lot less have actually joined our club this year, this offseason than the last two… In 2019 we brought in 20 new players, and in 2020 we had 20 new players as well so out of those 40 players we’ve had 30-odd roll over, they’re still with us,” Fairall explained. “I think only about 13 have come into the program this year so it’s fairly consistent for us this offseason. It’s been really good and a lot of our players are now understanding what our program and what the competition is about. “The 13 players that have come in have pretty much just slotted in seamlessly and our leaders have made sure that they’ve come in and gelled and bonded fairly quickly.”

Whilst the team boasts a number of top AFL Women’s talent, including Ebony Marinoff, Caitlin Gould and Deni Varnhagen, Fairall’s list has plenty of local talent that will look to have an impact once the season begins. The new-look squad also includes a number of youngsters who have stood out during the preseason, returning in 2021 and building on their Under 18s year.

“I know that since they’ve (AFL Women’s talent) actually been involved in our program that our players have certainly learned a lot from them over the last two years but in terms of what’s happening right now… We’ve had Tessa Kohn continue her growth and development. Jess Bates is coming into her second year so her experience effectively doubles overnight and she too has had a very strong season on the track. “We’ve also got Tamsyn – our juniors are actually really growing so Tamsyn Morriss and Brooke Tonon, Ellen Tyminski. I could name a few, like I said it’s been a fairly strong and consistent preseason for us.”

Glenelg will look to continue to be a competitive side in season 2021, and further develop its form with Fairall suggesting that the club’s turnover in players and relative inexperience impacted on its potential over the past few seasons.

“We want to be pretty skilled. That’s something that we’ve worked on since I’ve been appointed in the role of coach,” Fairall explained. “We had made some significant inroads in my first year and probably fell away a little bit last year in that regard because we just had so many inexperienced players in our program, but we do want to be a skilful and a hard side to play against.”

Glenelg’s 2021 season kicks off against Sturt on Saturday, February 27.