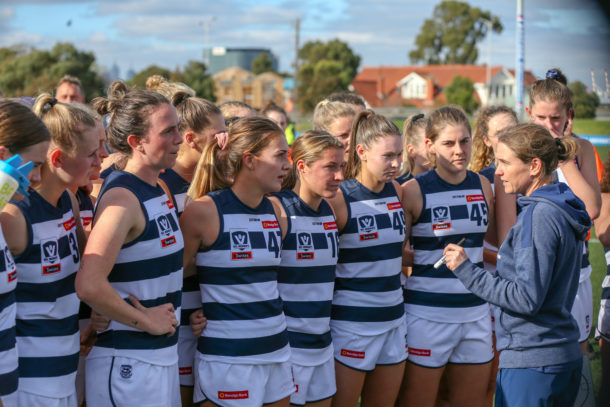 GEELONG is not overcomplicating things when it comes to attacking the 2021 VFLW season, according to new head coach, Andrew Bruce. Taking the reigns after being appointed as assistant in 2020, Bruce says his side has worked hard to keep in shape and will try to bring an attacking brand of football to the upcoming campaign.

“We’ve had a really good preseason,” Bruce said. “Obviously most of the girls had most of the year off last year but came back in really good shape and they’ve worked really hard through the preseason. Our skill level has certainly jumped up from the start to where we are now, so we’re really comfortable with where they are.”

“We want to be nice and hard at the football and use it as best we can. It’s very much an attacking style of play where we give ourselves the best opportunity to score. We’re not overcomplicating it at all, we want the players to continue to develop in what they’re doing but also to attack the game as much as they can and try and get some good pressure on the opposition.”

“It’s a good brand of footy where the girls are really confident in what they’re doing and we’re defending really well, so we’ve kind of got both aspects of the game going okay at the moment.”

Having effectively lost a year of competitive football in 2020, the Cats are no different to many other teams in that they will enter this season with a fresh-looking list, “significantly” so in the words of Bruce. He says Geelong will field a group of mixed ages and experience levels throughout the season, with aligned AFLW and NAB League players also set to roll through the squad.

“There’s been a significant change in personnel in the playing list,” he said. “There’s still probably half-a-dozen players who have been around for a bit of time and are quite experienced.”

“Michelle Fedele, who has been with the VFLW group pretty much since it started at Geelong, she’s missed a couple of years with an ankle injury but she’s come back fully fit and is going really well, so it’s exciting to see her play.

“Jamie Woollett has also stayed around and with her experience will be really important for us – Rebecca Pearce is the same. Then we’ve got some newer players; Claudia Gunjaca, who’s originally from Geelong but the last few years has been studying up in New South Wales and played in their state league. She’s come back this year and has been absolutely fantastic for the group – can play at both ends of the ground, is a really strong mark and her leadership is fantastic.”

“We’ve got a couple of younger girls as well. Tamara Smith, who was originally out of the Murray Bushrangers and Paige Sheppard, who was going to have the year off last year anyway, but has come back to footy and has done really well. We’ve got a player who’s crossed from Germany, she was playing in the AFLW Europe League. She’s come across to try her luck here, has settled in really well with the girls and is a very good player.”

“We’ve had a few (NAB League) girls come train with us through preseason. Renee Tierney and Ava McKeegan from Geelong, Chloe Leonard from Greater Western Victoria (GWV), she’s their captain this year. We expect them to play with us at various times through the year and probably a couple of other girls as well like Tess Craven or Annie Lee from Geelong.”

“It’s really exciting for those girls, obviously playing at that high standard in their age group through the NAB League and then also getting the opportunity at different times to play in the VFLW will be fantastic for their development.”

Along with the perks of strong talent pathways, the Cats will also benefit from a green AFLW side in the same region. Brimming with young talent, five to six players from the Geelong AFLW squad will play in the state league each week should they miss out on senior selection. Bruce says the alignment has been “great” for both parties.

“Obviously with COVID restrictions there were restrictions on how many train-on players they could have from the VFLW into AFLW, however a few of the girls did get to do that for a few weeks and they came back saying how great it was, the inclusiveness of it,” he said.

“Without doubt, their training standards picked up from that point, obviously being around some more experienced players and seeing how they go about their business has really had a positive impact on the way our players do that. With the alignment, we have five to six AFLW players (depending on injuries) come back to our games.”

“Again, it’s fantastic for those players to play footy rather than having to sit out when they’re not selected, but also just to assist with the development of our players throughout the matches with direction and different advice that they can give. Both groups are a fantastic bunch of girls and they all get along really well.”

Another area which has gone relatively smoothly thus far is the injury front. Pearce (hip) and a couple of players rehabbing ACL tears are just about the only injury concerns for Geelong ahead of Round 1, with the fitness of the players also up to scratch. The Cats will face off against Collingwood on Saturday afternoon and while Bruce expects stiff opposition, he says it will be difficult to gauge how each side stacks up until competition commences.

The Cats will announce their leadership group at tomorrow night’s jumper presentation, and promise to be raring to go after showing marked improvement in their second practice game, against Hawthorn. Bruce says his troops are simply “excited to have footy back.”

“Everyone’s missed out on so much over the past 12 months,” he said. “To get some positivity through sport is fantastic for everyone; whether it be the players, staff or their supporters. It’s all really good and we’re all just very excited to get back amongst it.”