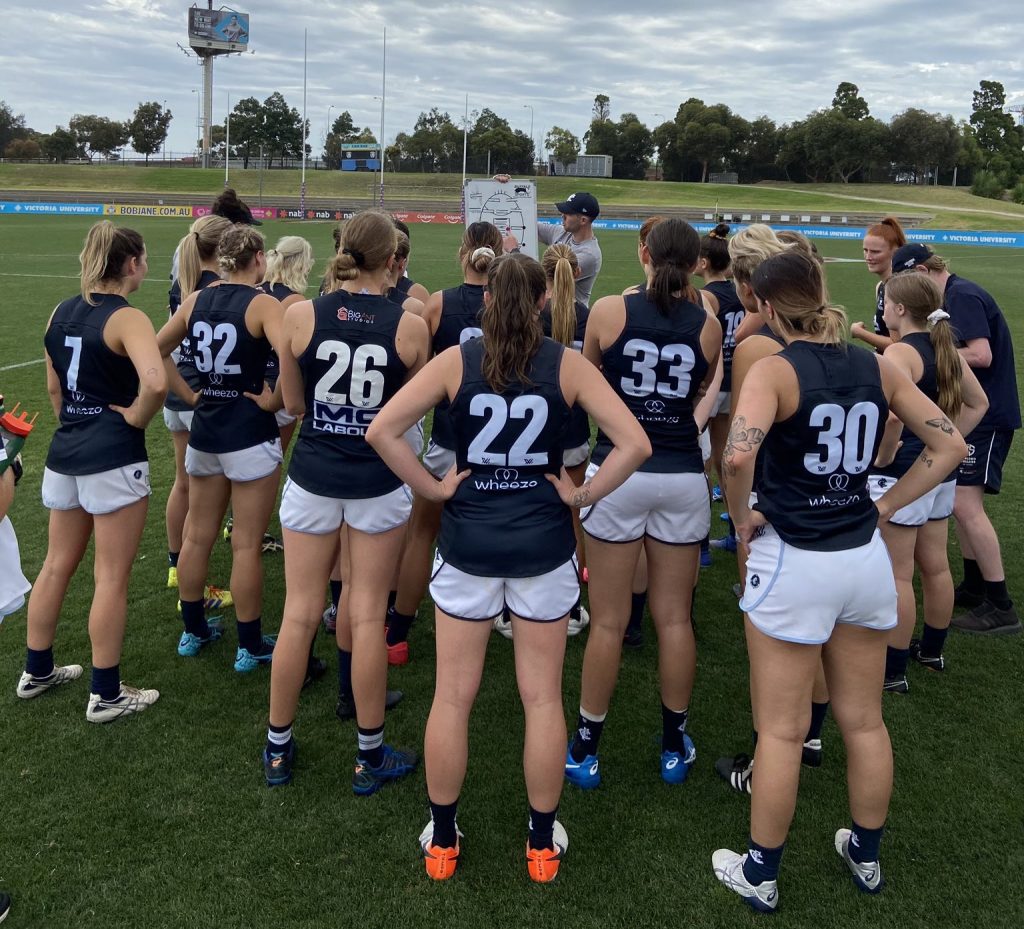 CARLTON has hit “the reset button” on its VFLW program and is looking towards long-term development in 2021 and beyond, according to new head coach Luke O’Shannessy. With vast experience in the talent pathways system, most notably at the Oakleigh Chargers, O’Shannessy says he is excited to see how the group progresses across his first season at the helm.

“It’s been a really interesting preseason for us,” O’Shannessy said. “We’ve had a significant list turnover for the last two years, so there’s a lot of new faces. “During summer and preseason there has been a big focus on squad bonding and that real connection between the playing group, and we’re starting to see that come to fruition. It’s great to see a group gel so quickly over a short preseason.

“I was really pleased with how the group came back after having 2020 put on pause from a structured and formal training sense, requiring players to drive their own training – whether that’s from a fitness or skills perspective. “When I came on board in late-October/early-November our first month was still online and I was really nervous I suppose, but I was very pleased that clearly they’d been putting in the hard yards over the Covid break and came back in really good shape.”

The long-term approach Carlton has adopted towards its VFLW program as a potential feeder to its AFLW squad has also pleased O’Shannessy. As an aligned club, the Blues will have access to AFLW-listed players who miss out on senior selection throughout the top flight season. O’Shannessy said the perks running concurrent competitions makes for a “win-win” for both programs.

“It can only benefit the program, he said. “We had nearly seven players go up and spend two weeks training with the AFLW program (during preseason). “It was invaluable for their development, the chance to go up and see how the AFLW program works, mingle and work with no-doubt their role models in the AFLW program and work under ‘Harf’ (Daniel Harford) and his crew.

“When they came back they were able to share some of their learnings, both positive and maybe some areas they needed to lift moving forward – whether it was their running capacity, the speed and intensity of training and match sim, the physicality – all those sorts of things that they learned.

“From the other side of things, over the last couple of practice matches, we’ve had the luxury of having between five and six AFLW-listed players spend a game with us and five of the six have been the same in both game, so we got a chance to get to know them from a staff point of view and the players have gotten to know them as well.

“They really slotted in seamlessly and we acknowledge that they’ve got aspirations to crack the senior side and we want to get them there through being able to perform with us, but at the same time we want to learn from them. “It’s only going to make us stronger and role model the sorts of match play and professional behaviours that we know they bring from an AFLW point of view.”

At the core of a fresh and young-looking squad are a couple of returning leaders who will head Carlton’s cause in 2021. Ally Bild was voted in as captain and will be supported by vice-captain Jen Lew, along with three others in a five-player leadership group. O’Shannessy identified his two official leaders as benchmark players for the side, while some promising recruits are also primed to make a splash.

“(Bild and Lew) are really setting the tone for the playing group and becoming real benchmarks for levels of professionalism on and off the field,” he said, “They’re ticking all the boxes and really role-modelling the sorts of behaviours that you’d like to see at VFLW level and beyond… there’s a reason they’ve been voted in as captain and vice-captain.

“We’ve got some players who have relocated down from Cairns in Jasmine Ware and Akayla Peterson. “Jasmine Ware is a small-medium defender, has really slotted in nicely and had her best showing in the weekend’s practice match. Akayla is a running outside player who can play tall but also run end-to-end. We see her being able to feature on the wing at times or as a half-forward hit-up target.

“Then we’ve got a lot of good young talent coming through as well… we’ve got Amber Micallef who’s a 19-year-old straight out of the NAB League, she’s going to feature strongly in the midfield. “They’re just a few names to keep an eye out for… I’m really keen to see each and every player in the squad because it’s my first year working with each of them, so I’m looking forward to seeing how they go this year.”

Carlton will also have access to 18 and 19-year-old NAB League-listed prospects, most significantly through its alignment to the Northern Knights talent region. AFLW Academy member Maykaylah Appleby has already spent some time training with the Blues, while 19-year-old Maeve Chaplin has had experience on the track with their AFLW program. Teleah Smart is also poised to join the squad, and was coached by O’Shannessy in the 2019 Vic Metro Under 16 squad alongside Appleby.

The Blues enjoyed two practice matches against the Western Bulldogs, going 1-1 in the games held at Princes Park and Whitten Oval. O’Shannessy said the repeat fixture ended up being “a blessing in disguise”, providing some valuable insight as his side prepares for season proper.

“We were able to benchmark ourselves against the same club twice to see what was the same, to compare and contrast our performance and that of the opposition,” he said. “From our point of view results ultimately don’t really matter, it’s all about what you see from game one to game two over a two-week period… we were really pleased to see that the girls put a really strong showing in game two.

“We liked a lot of game one, we saw some glimpses, but then we saw a really rounded performance in game two. “You could argue it was a real good three and a half quarters of really strong football that fills us as a squad with great confidence going into Round 1.

“We saw increased scoring from our point of view and an increased hunger for the contest, which is something we’re trying to build into the squad as two key pillars. “High-scoring and stronger around the contest with some good run-and-carry on the outside.”

Looking towards Round 1, the Blues are booked to take on Casey Demons at Princes Park on Saturday afternoon. O’Shannessy said the squad is about “90 per cent” good to go, with some returning players set to make team selection a difficult one come Thursday.

“We’re ready to rock and roll and I couldn’t ask to be in a better spot at this time of the year,” he said.