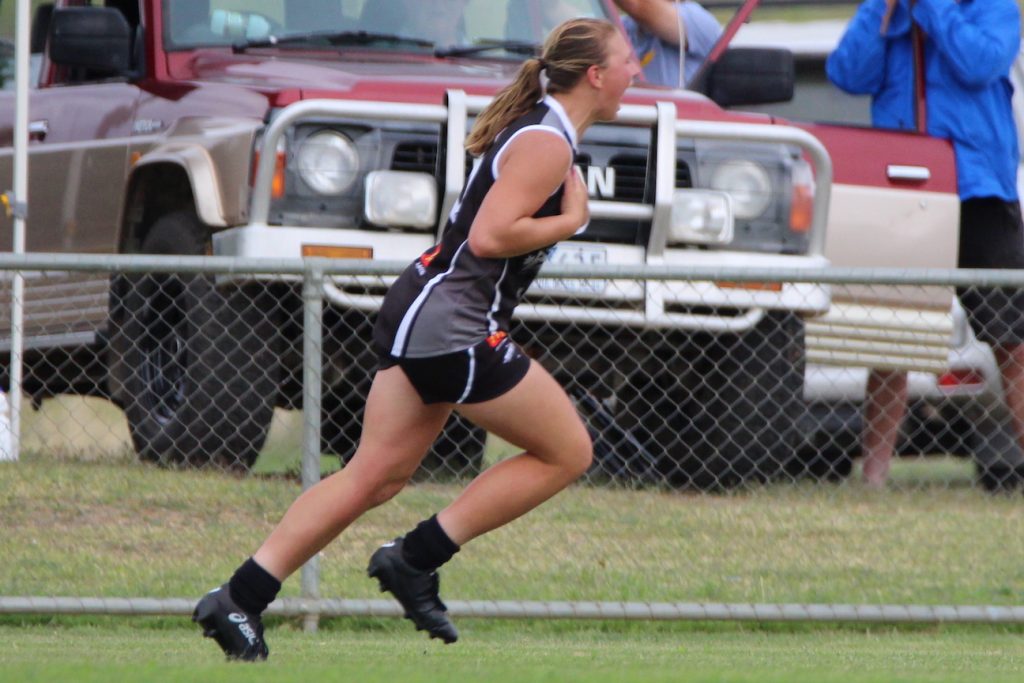 THE NAB League Girls competition returned this weekend after momentary postponement, with the six games throwing up another mixed bag of results and plenty of memorable moments. In continuing our new weekly series, we take a look at the top moments from each match – whether they be game-defining feats, big marks, glorious goals, or otherwise. There was plenty of eye-catching action in Round 3, as the best Victorian girls clicked into gear once again with some impressive feats.

There were many small individual highlights which could have made the cut from such a high quality game, but Eliza James‘ clutch goal to all-but seal Oakleigh’s win in the fourth term proved more memorable than any long-range effort, high mark, or bursting run on the day. Stationed deep forward after playing most of the game in midfield, James read the high ball best against her direct opponent in a pure one-on-one contest, before swooping on the loose ball as her marker fell and slamming the ball home into an open goal. Cue the celebrations as Oakleigh charged to victory against the wind.

Garth arrives at the double

The Geelong Falcons looked like they were on a mission from the first bounce, and top-age forward Zoe Garth turned dominance with possession into scoreboard control. The talented forward slotted home a set shot for her first major midway though the term, then a minute later snapped around her body for something out of nothing from long range to sit up and bounce home. In the blink of an eye, the Falcons were three goals to zero up and already well on their way to victory on the road.

Pisano bursts onto the scene

There has been plenty of talk recently about how the next generation of female talent is taking over, and that is true as far down as the Under 19 competition. In just her second outing for Eastern, 15-year-old Alyssia Pisano burst onto the scene in a devastating performance; amassing 14 disposals (12 kicks), three marks, two tackles, five inside 50s, and four goals in the Ranges’ 114-point triumph. She booted the first goal of the game, but came to life in term three with two majors in the opening 90 seconds, before adding her fourth later in the same stanza. The context of the game may have helped, but the goals do not kick themselves. Remember the name.

Ham soars and slams the Jets inside 50

Dynamic Western Jets forward Montana Ham is prone to a highlight or two per game, and registered another big play on Saturday. The 16-year-old soared to take a contested grab over Abbey Jordan in the Jets’ defensive half of the ground in the third quarter, but was not done there. She then backed herself to outrun the trailing Dandenong players, slapping away the arms of two would-be tacklers and getting the ball deep inside forward 50. It is that kind of explosiveness that has Ham marked as one of next year’s best draft prospects.

It was hard to pinpoint an exact moment in the match, but the GWV Rebels’ first half was something to behold. They took control early with some important goals, then raised the pressure up sky-high, forcing Murray to make mistakes out of the Bushrangers’ defensive 50. It created turnover goals, as the likes of Paige Scott (three) and Paige Kissel (two) benefitted. Tahlia Meier also created havoc inside 50 in the opening term with a couple of majors, and the whole team put together a memorable half before the Bushrangers could arrest some of the momentum and even out the game in the second half.

Jordan shows poise beyond her years

In another fine example of the talent generation next holds, 15-year-old Northern prospect Ava Jordan was the latest to showcase top potential in what was only her second NAB League outing. In a tidy piece of play during the third term, she managed to get the ball just on the forward 50 arc and spotted Megan Girolami making a lead in the centre of the 50. After evading oncoming Dragon, Kiana Lynch, Jordan placed the ball right in front of Girolami so she could easily mark it on the chest. Again, jot the name down – she finished with 15 disposals and three inside 50s.