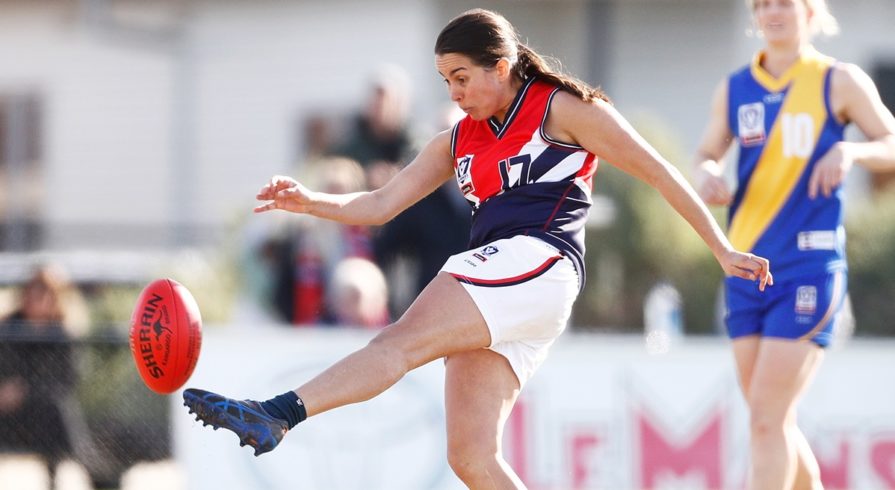 DAREBIN Falcons are “relishing the opportunity” to compete against AFLW-aligned opposition in the upcoming VFLW season, according to head coach Mitch Skelly. In a revamped schedule, both seasons are set to run concurrently to allow those who miss out on senior action during the AFLW campaign to play each week.

The Falcons are one of the few true standalone sides left in the state league competition though, meaning that access to those top-level players will be restricted to the second half of the season – once the AFLW competition is run and done. Skelly says the new structure gives Darebin “a chance to be really competitive”.

“We’re completely standalone, I guess that’s one of the many points of difference with our club,” Skelly said. “We don’t have a men’s team, we don’t have an AFLW alignment, we’re pretty independent and get to do our own thing.

A mixed bag of fitness and touch levels on the back of 2020’s scrapped season has now evened out, and Skelly says his troops are “flying” just a week out from Round 1. The Falcons managed to fit in two practice matches against fellow standalone sides in Williamstown and Essendon, going down in both fixtures but taking plenty away from each test.

“When we came back there were a few mix levels of workloads as a result of the lockdown and we didn’t want to put too much pressure on players,” Skelly said.

“By the time we got back from the Christmas break, everyone was flying. Some of our 2km time trials were really good, there were a lot of PB’s (personal bests). The skill and the touch by now I think we’re back to where we want to be at this stage of a preseason, even after having that long break.

“We played Williamstown a few weeks back and we lost that one by just under two goals. It was a good hitout and we learned plenty from that game. Tonight (Thursday) we’re playing Essendon out at Tullamarine so that’s another good test between two standalone teams who don’t have AFLW alignment.”

There have been some clear standouts on the track for Darebin as players prepare for their first taste of competitive action in almost a year. Skelly pin-pointed some of the leaders of the squad as ones to watch, as well as a couple of developing youngsters poised to make a splash at VFLW level.

“Steph Simpson has just been brilliant, she sets the standards at training,” he said. “Every time we do a match sim she just stands out as someone who’s been around for a while and has that leadership as part of her game.

“Down the other end of the field there’s Gena Lawson-Tavan. She’s another one that I think she keeps getting better and better and I wouldn’t be surprised if in the future she ends up being drafted at some point.

“I think it’s really exciting we’ve got four girls who’ve come from our Under 18s premiership team in 2019. One’s Stephanie Elarmaly, she never played any rep footy or anything like that but I think she’s somebody who can have a really big impact at VFLW level this year.

“We have one player from (NAB League region) Calder, Peppa Poultney. She’s a Darebin junior, she came through the club playing all her youth footy here and she’s on Calder’s list this year. “We’ve also listed her, so she’s the one NAB League player that’s on our list currently, but we do hope to add a couple more down the line.”

Having had his first year in the role ultimately scrapped in an on-field sense, Skelly says he is “really excited” to finally see the Falcons take the field and show their worth. He was also glowing in his review of the “inclusive” club.

“The club is so positive and inclusive of people and everyone who comes down,” he said. A lot of people who come down, even if they don’t know much about the club’s history, they just embrace it and they dive in – whether it’s at VFLW level or NFNL. “I love the club and I’m just really excited about the opportunity to get into some games and test ourselves out. With the new season coming up, with the structure changing there’s a lot of unknowns and a great opportunity to start fresh and have a good crack at it.

Darebin is set to announce its leadership group in the coming days, consisting of six players. While no official fixture has been released, Round 1 of the 2021 VFLW season will get underway next weekend.