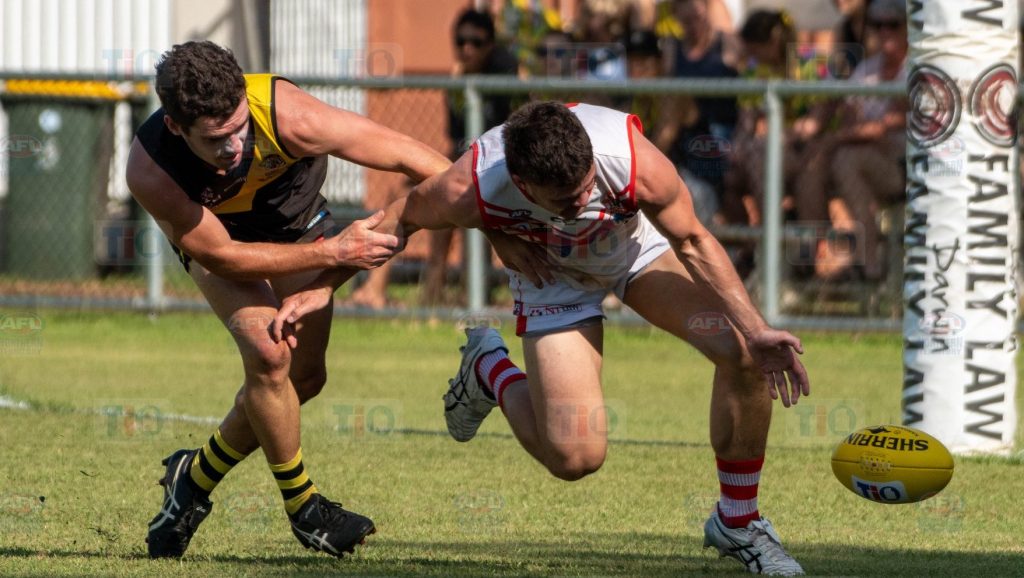 THE FINAL home-and-away round of Northern Territory Football League (NTFL) Men’s Premier League action sees the top four sides tussle in fixtures which could well prove to be postseason previews. Elsewhere, Tiwi’s search for points this season goes down to the wire when the Bombers face Palmerston, while Darwin will hope to hold winning form on the eve of finals when it takes on Southern Districts. That, and more in our weekend preview.

Tiwi will get a last-chance dig at securing points in season 2020/21 when it kicks off Round 18 against Palmerston at TIO Stadium on Sunday afternoon. The Bombers have gone winless throughout this campaign and after showing some promise, have taken a turn for the worst since returning after the Christmas break. Palmerston has not fared much better, but boasts two wins this season having bettered the Bombers twice – in Round 2 and 10. The third meeting between these sides has a few ramifications despite what their ladder position suggests; with Palmerston looking to send off coach Alwyn Davey on a positive note, while Tiwi will obviously be out to avoid a season without any premiership points. Expect the undermanned Bombers to take the game on.

Darwin will look to build a winning streak heading into finals as it takes on Southern Districts at Norbuilt Oval on Saturday. The Buffs have won three of their last four games, including a bounce-back performance against Waratah last week as both sides prepare to face off in next week’s elimination final. Districts’ fate has already been decided as they just missed the top five cut, but remain the best of the rest in this year’s competition. The Crocs’ only victory in the last six rounds came against Tiwi, with overcoming stiff top-end opposition proving the thorn in their side this campaign. Darwin has taken out both fixtures between these sides in 2020/21, including as recently as Round 14, so will hope for a clean sweep and strong run into finals.

Second spot is up for grabs as St Mary’s and Wanderers lock horns at TIO Stadium on Saturday evening, with a mental edge also on the line ahead of their qualifying final clash next week. Both sides have already locked in a second finals chance after stellar seasons, most consistently putting their hands up as Nightcliff’s closest premiership rival. Plenty will be revealed as they go head-to-head for a third time this season, with the ledger all square at one win apiece. The Saints come in riding a serious wave of form, winning 10 of their last 11 games to catapult right into the flag hunt. Wanderers has gotten the job done with wins in four of its last five outings, but the Muk Muks will have to click up a gear if they are to live up to what should be a finals-like intensity.

Minor premier Nightcliff has lifted the intensity in the lead-up to finals, and will have Waratah firmly in its sights as the two sides meet at Gardens Oval on Saturday night. The Tigers have again been dominant this season and look to be peaking at just the right time; boasting a nine-game unbeaten run and wins well in excess of 100 points over the last three weeks. Waratah’s true premiership credentials have been tested in that time, with the Warriors’ four-game win streak halted by two consecutive losses against finals-bound opponents. Tahs have been competitive against Nightcliff in two losses this season, but will need to be at their absolute best to overcome the yellow and black army which has been in devastating touch of late.