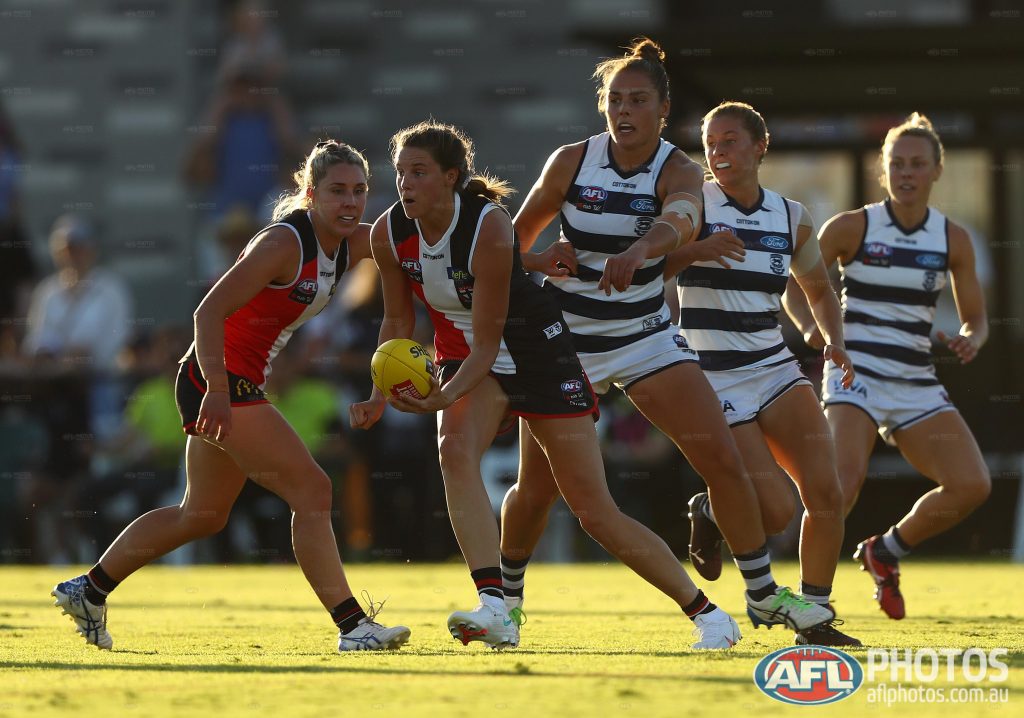 CROWDS returned to Victorian AFL Women’s matches on Friday night as St Kilda hosted Geelong to open Round 4, with the Saints well and truly getting the points on the board at home at RSEA Park in Moorabbin in a hotly contested clash, 7.9 (51) to 3.4 (22).

It was very much a midfield-dominated game in the early stage of the match, with the visitors unable to apply the forward pressure required to get on the board despite a couple of early opportunities and both sides using their pressing defence. An excellent bomb forward directly into the hands of Caitlin Greiser proved the Saints were there to play, with the star forward booting her first of the evening, and despite a couple of nervous moments in the latter stages of the quarter, it was the Saints that prevailed in a tight contest to lead at the first change, albeit by a meagre five points.

The tight contest continued in the second, with both sides applying a wealth of defensive pressure and denying any easy clearances. But an early 50-metre penalty and goal from Richelle Cranston saw the Cats take a one-point lead, with the physical contest showcasing plenty of talent as the experienced names across the ground piled on the pressure as much as the young stars of the game. Quick ball movement was the theme of the quarter with both teams under a wealth of pressure, but a couple of missed opportunities from both sides kept the scores low as the match fired up.

But whilst the Cats, led from the back by Meg McDonald, piled on the defensive pressure to continuously propel ball outside of their back 50, the defensive unit from the Saints had a setup and stuck with it, forcing the ball back forward with Kate Shierlaw and Darcy Guttridge looking dangerous around the pack. Some more patient kicking allowed the Cats to get some separation through the midfield to drive forward, but a defensive flood back from the Saints made life hard as the two sides could not be separated. Rosie Dillon and Olivia Purcell both had the game on their terms throughout the first half, proving strangleholds for their respective sides.

Tilly Lucas-Rodd made her presence felt early in the second half with a couple of excellent forward forays, but the Saints’ efforts went unrewarded inside 50 as inaccuracy forward continued to plague the home side, controlling the airways but unable to capitalise. A quieter first half from Georgia Patrikios and Tyanna Smith was quick to change as the young firecrackers were in everything to start the second half, while it was Shierlaw who finally managed to break through the Cats defence, booting a cracking running goal to extend the lead to 10 points. A Bella Shannon goal extended the Saints to an 18-point lead, with the Saints peppering the scoreboard as the tired-looking Cats struggled to stop the Saints through the midfield. What looked like a certain goal from Geelong’s Steph Williams was spoiled by the Saints’ backline brigade, as the momentum had well and truly turned. A Greiser goal after the siren was the icing on the cake to finish off an excellent quarter for the Saints, with a whopping 25-point lead at the final change, rendering the Cats scoreless.

Despite a lighting issue at RSEA Park, the final quarter continued with Geelong flying out of the blocks with nothing to lose. Once more it was the likes of Patrikios and Smith creating the goods around the ground with their excellent one-two punch, with a beautiful spearpoint kick to Jacqui Vogt being rewarded with a 50m penalty and goal, whilst a third Greiser major add further insult to injury as the scoreline extended to 37 points. A maiden Georgie Rankin goal lessened the margin a fraction as the Cats put their first goal on the board since the five-minute mark of the first, and while it was followed by a Phoebe McWilliams goal not long after, it was too little, too late from the Cats. A Kate McCarthy major well and truly put the nail in the coffin for Geelong, as they head home with a fourth straight loss to start the season.

What started out as a hard fought slog turned into a slaughter, as the Saints piled on the pressure for an excellent 29-point victory. Rebecca Webster and Amy McDonald led all-comers in the loss, racking up 24 and 21 touches respectively, while it was Lucas-Rodd who led the Saints charge with19 touches. But the combination of Patrikios (17 disposals, two tackles) and Smith (16 and 11) continues to work wonders, with the duo using their game smarts to mop up the competition. Greiser equalled her personal best with three goals on the board from nine touches and three marks, while Nat Exon and McDonald both piled on the physicality with six tackles apiece.