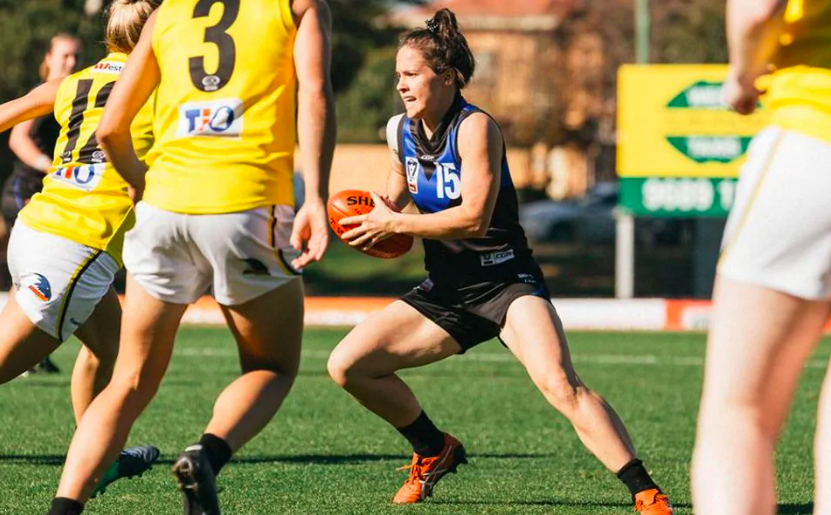 A NEW-LOOK North Melbourne VFLW side has been “promising” during preseason, according to new head coach Cheyne Webster. Having cut his teeth as an AFLW development coach at the Kangaroos, Webster is now set to take the reigns in his first senior gig and says the squad is in good shape heading into season proper – even after a heavy turnover and nearly 12 months off.

“It’s been a really promising preseason,” Webster said. “We’ve got a really good blend of youth and experience and adding into the mix the alignment with AFLW has helped the girls in terms of having some experienced heads around them to lead the way.

“In terms of fitness and touch, we’ve been able to take the opportunity to get back to Arden Street and our sessions have been really strong, so I’m happy with where we’re at.”

“I think having that 12 months off has made the group even more hungry to have success and to get back on the field and play some footy again. “It’s a really exciting time at North Melbourne, both from a VFLW and an AFLW space, so to have the girls back is really exciting.”

With the alignment to North Melbourne’s AFLW team seeing its reserves transition away from the Melbourne Uni title, the Kangaroos have overseen a “huge turnover”, one which Webster says spawned the opportunity for somewhat of a talent search.

“We’ve only kept about six Melbourne Uni-based players, obviously through that transition between the Melbourne Uni Football Club and North Melbourne Football Club,” Webster said. “We’ve searched far and wide and gone on a bit of a talent search, we’ve got some girls from interstate – from Canberra, Darwin, and also down in Tasmania.

“A number of girls that we’ve recruited from interstate either have family or are relocating to Melbourne, so it’s exciting that those girls from interstate see North Melbourne as a destination place to both grow their footy, but also for potential opportunities in the AFLW space.

“It’s a very new-looking list and I think it’s going to take some time, but we’ve got every opportunity with the quality of talent we’ve got to press for finals and to have a successful year.”

The Roos have returned to competitive action in the form of two practice games thus far, taking on Geelong and the Southern Saints. Webster says the hitouts served as a handy educational tool to “try a few things” and blood some youth, with some of the side’s key strengths in competitiveness and energy set to quickly come to the fore.

“In terms of where out list is at, it provided us with an opportunity to have a look at players which we haven’t signed and players that we feel like we need to get some gametime into, and try a few things,” he said. “For us it was more of a case of getting some girls into roles that we want to see them play this year in VFLW and in terms of our senior players, we’ve been very cautious with not overloading them in going through that process.

“I think out number one trait will be our competitiveness and our pressure around the football. “We’ve got a really strong and experienced defensive group and our midfield is young and hungry, so I think our challenge is going to be being able to consistently kick scores but for us, our competitiveness and our energy and pressure around the contest will be our number one attribute.”

Though a selection of around five to six AFLW-listed players will inevitably aid the Kangaroos’ cause each week, there is a bunch of strong talent set to impress weekly at the reserves grade. Webster pointed out some of the most promising preseason performers who will be at the forefront of their side’s finals push.

“We’ve got a couple of girls who have played some AFLW football in the past – girls like Nikki Wallace and Lexi Hamilton – but I think one to look out for is a girl that we’ve recruited, Meagan Kiely. “She’s been in and around (GWS) Giants programs up in Sydney for a little while but she’s someone that I think has every opportunity to play some good footy and to get on an AFLW list, that’s for sure.

“Two (signings) that really stand out are Ciara Fitzgerald, who’s come from the Richmond AFLW program to us, she’s been really exciting, and also a young ruck in Olivia Woods who’s played a little bit of college basketball. “She’s a cross-coder that will play in the ruck for us and she’s been really promising as well with how much she’s picked up the game in such a small space of time.

“We’ve got one (NAB League player) that is on our development list, Marli Klaumanns-Moller. “She’s currently with the Western Jets but has played in one of our practice games and also played in Round 1 of the NAB League. “She’s a really exciting defender and I think that she’ll get some opportunities to play VFLW football at some stage this year, that’s for sure.

The club’s leadership group is set to be voted in on Friday, with a core group of three or four players in the box seat to claim those roles. Though no fixture has officially been released yet, the Roos are set to line up for Round 1 later this month.