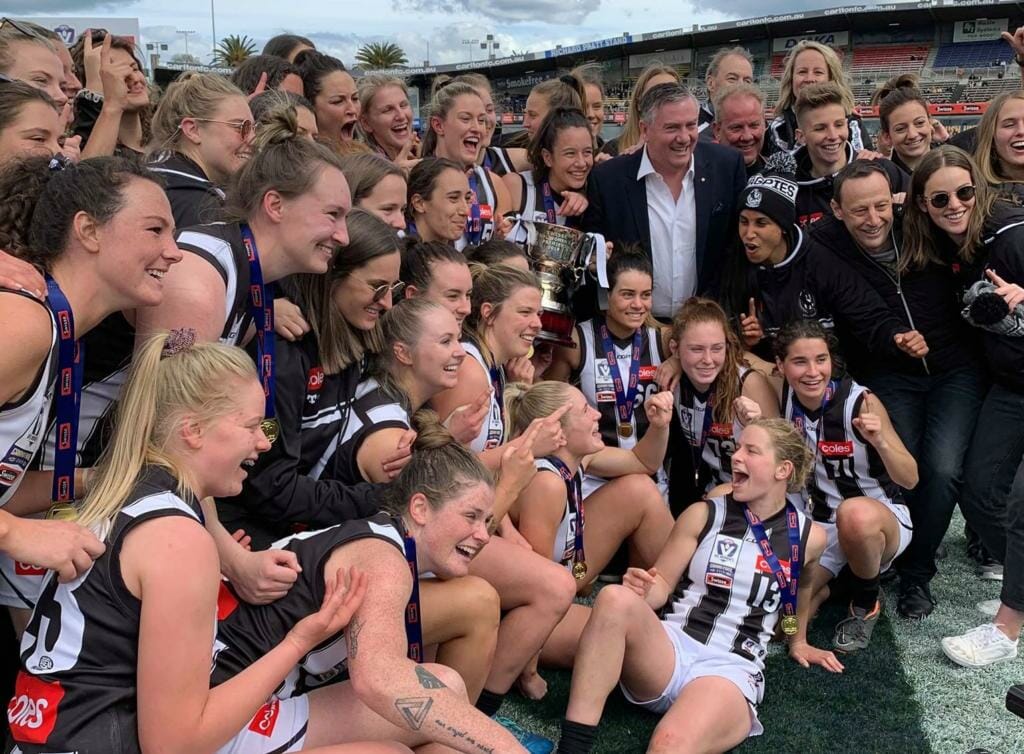 REIGNING VFLW premier, Collingwood has added some “fresh faces” to a core group of remaining players ahead of season 2021, according to head coach Chloe McMillan. After her first year at the helm was ultimately scrapped in an on-field sense, McMillan says the Magpies are “going really well” but will inevitably look a little different this season.

“It was obviously challenging getting everyone back after not playing footy over the winter, but everyone’s come back in really good shape,” McMillan said. “We’ve worked pretty hard on our fitness and our skills early on to get the girls back being used to footy training and getting their loads in. “Now we’re just fine-tuning to be ready for Round 1 next week.

“(The team) will look a little bit different, which is a good thing I think. “We’ve got a core group that’s stayed around the club, we’ve got some really good people and leaders within that list who have stuck around. “But we’ve added in some exciting younger players and some mature players as well that’ll come in and play a role for us too.”

On top of retaining some key, senior figures for 2021, the Magpies will also be able to blood elite level talent each week due to their alignment to the Collingwood AFLW team. NAB League prospects will also be able to rotate through the program, while exciting new recruits promise to make a splash.

McMillan has been impressed by players which fall into all of those categories, and outlined a few standouts from preseason.

“Sarah King has definitely been a standout,” she said. “She’s going to be our ruck for the season and she’s still only 23-years-old, but the way she’s carried herself (is impressive). “She’s been at the club since the start of our VFLW program and has developed a mile this preseason so she’s ready to take the competition on.

“One of the girls that we’re really excited by is Imogen Barnett, she’s a key forward that played in the VAFA and will look to play that key forward role for us. “She’s got really sticky hands and can move up and down the ground, so she’s been awesome for us.

“Another one that we’ve got is Matilda Zander, she came over from Norwood in the SANFLW where she won Norwood’s best and fairest. “So she’ll come over and play with us for this season and we’re really excited to see her come in and play for the Pies.

“We’re really excited to have Olivia Meagher with us for this season too. “She’ll play a few games at (NAB League club) Eastern Ranges and then hopefully come and play the majority of the season in the VFLW. “She was one who was probably unlucky not to get drafted so we’re hoping to keep developing her and prove to everyone that she can match it with the best and hopefully get drafted at the end of the year.”

Looking towards the strengths of Collingwood’s lineup, McMillan described her side as “mobile”, with a couple of key styles set to be leant on. With such a strong connection to the AFLW program, she says there may well be a visible crossover between how the two sides play.

“I think we’ll be a mobile side that can play a couple of different sort of ways,” she said. “We’re training that we want to promote exciting ball movement and get our handball game going a lot more than we have previously. “We’re trying to open up the game that way but also to control the it when we need to and probably play a bit more sensible footy.

“(AFLW alignment) is amazing. I think that’s certainly helped the program over the past couple of years and definitely for this year even having (AFLW coach) Steve Symonds down at training has helped develop all the girls. “I’m involved with the AFLW program as well so being able to cross over, we’re learning exactly what the AFLW team is learning and we’re hoping to roll out a pretty similar program to what the AFL girls are exposed to.”

The Magpies have been able to further monitor their progress via intraclub and practice matches thus far, taking on Melbourne’s reserves on February 6 and preparing to face North Melbourne this weekend. The scratch match will prove Collingwood’s final hitout before Round 1, which is expected to be a road trip – pending the official fixture announcement. Collingwood’s leadership setup is also set to be announced in the next day.

As McMillan says, “now the fun stuff happens” with competitive action right around the corner.